Watch these INSANE motorcycle stunt riders get chased by the police helicopter and patrol cars for riding wheelies, drifting swing multiple lanes plus doing other stunts on the street.

A group of stunt riders performing extreme freestyle motorcycle stunts and tricks on public street’s and highway’s get the attention of law enforcement. Police chase a large group of bikers running from the cops. Motorcyclist lead police officers chasing them on wild high speed pursuit.


Police patrol cars at multiple times our only a few feet away from motorcycles performing drifts and wheelies throughout the entire police chase. Law enforcement use all the resource at there disposal to try and stop bikers evading arrest police even bring out a helicopter aka ghetto bird to spot light bikes running from the police patrol cars on the ground. 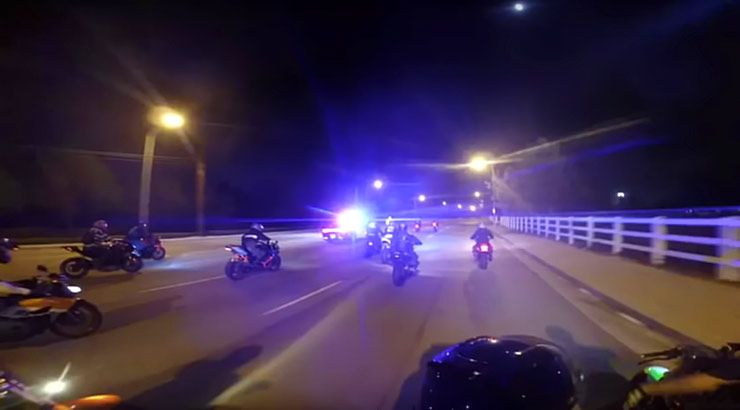 You’ll see one sport bike rider wreck while attempting to wheelie with cops only a few feet away. The stunt rider crashes while being chased by police cruises and helicopter spot light him above. Bike Vs Cops on the street bikers battle to out run law enforcement.
A few of the stunt bike riders our eventually caught and arrested by police but most of the stunt bike riders eventually get away and out run the police by going through a tunnel under the highway to escape all police including helicopter or ghetto bird!