Realizing one’s dreams is only half the battle, the rest of the challenge is reaching them. 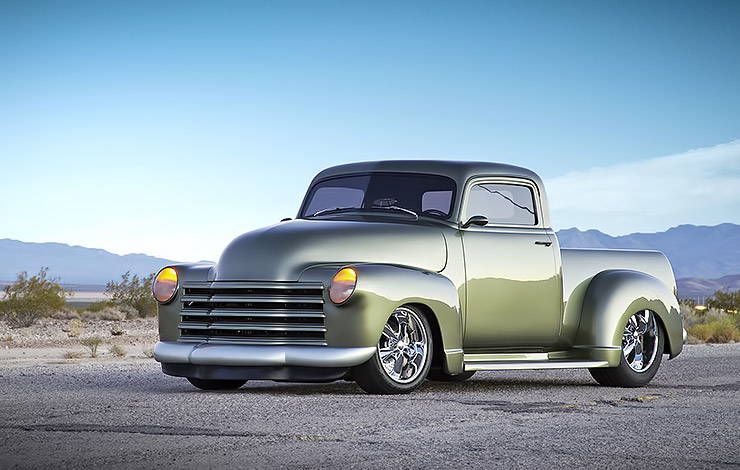 For Dermie Close of Henderson, Nevada, he realized long ago that his dream was to own a custom classic Chevy pickup one day, but it wasn’t until recently—nearly 20 years after he started his fateful build—that all his hard work and perseverance finally paid off.

Dermie’s first vehicle at age 16 was a ’50 Chevy pickup that he drove until the transmission gave way. Then he swapped in a Chevy 350-ci engine and a 350 turbo gearbox before selling it to a local Snap-on tool dealer.
– 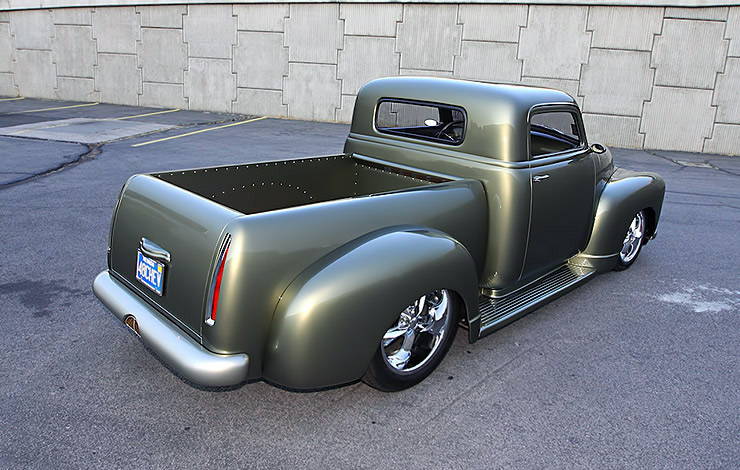 Many years later, while working at an Oldsmobile dealership in Las Vegas, Dermie came across another classic Chevy pickup at the tire shop next door, this time a ’48 3100 model fit his criteria for the ultimate build. That was 1995, and while it took Dermie 20 years to build in his spare time, the truck is now complete and absolutely gorgeous. Talk about being worth the wait.

Dermie’s an artistic person, so designing the ultimate truck wasn’t overly difficult. What was difficult was honing all of the inspirational builds he’s seen throughout the years, including masterpieces from builders like Foose and Trepanier at SEMA. This meant coming up with plenty of custom flare for the truck, but not going too over the top. It also meant teaching himself how to do the things needed to create some of the custom components that make builds truly stand out, including TIG welding, bodywork and developing an eye for hot rod design. From there, it was all about putting together the project. 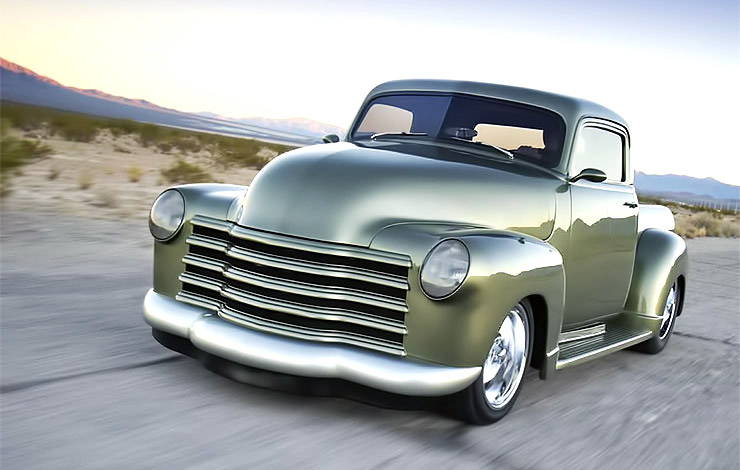 Knowing that the base of any good build is a good chassis, Dermie turned to Art Morrison to start the build off right. The custom chassis came with a custom triangulated four-bar rear suspension system, modified C5 Corvette front suspension system and Strange Engineering 4.11 posi-traction rearend, as well as air shocks and 14-inch Baer brakes.With the ultimate performance suspension system handled, Dermie took some inspiration from one of his hot rod idols, Chip Foose, and ran 18- and 20-inch Foose wheels finished in chrome and wrapped in sticky Toyo rubber. 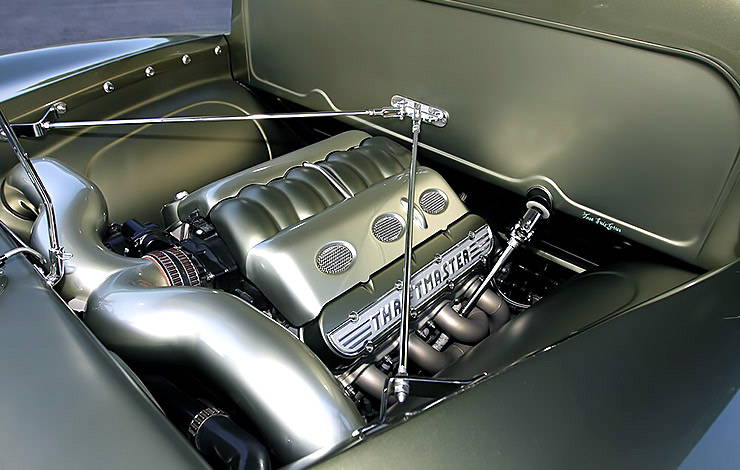 With the ground gear in tip-top shape, an equally performance-driven power plant was needed. A Hotcams 6.0L LS3 crate engine was just the ticket, and Dermie wasted no time making it his own.


In addition to all of the goodies already poured into the engine thanks to GM, Dermie added Spal fans, a Howe aluminum radiator and guides, Vintage Air water pump and alternator, custom intake system using a K&N air cleaner, handbuilt headers with a ceramic titanium finish, custom Clayton MachineWorks valve covers, and a custom 2 ½-inch exhaust with Magnaflow mufflers and a custom tip. The result is right about 500 hp and 475 lb-ft of torque to the crank. Backing the engine is a modern 4L70e transmission with a TCI shift kit and 2,500-stall converter. 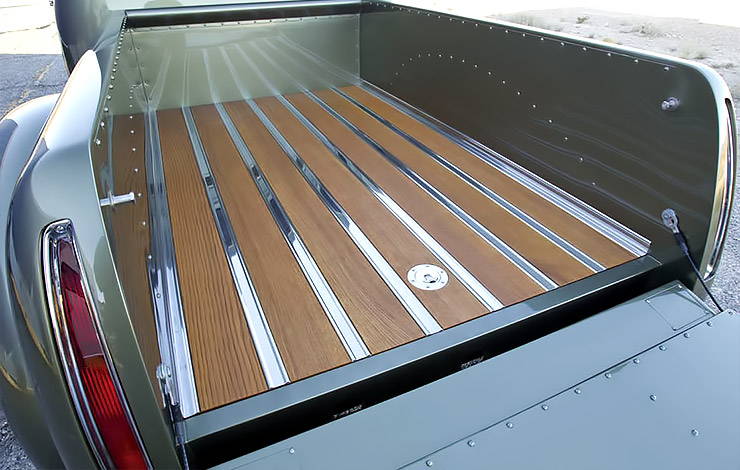 Dermie didn’t want his truck’s performance to outdo its aesthetics, so he focused a lot of time and effort into massaging the truck’s body into the masterpiece you see here. Chevy certainly did this truck justice when it rolled off the assembly line, but Dermie stepped it up a notch, extending the cab of the truck 6 inches through the doors, chopping the roof 3 ½ inches, building a completely custom bed with a white oak floor, pie-cutting the hood and finishing it off with unique touches, like custom bumpers, modified Rock Valley running boards, vintage GM car door handles, Cadillac taillights and Mercedes E-Class headlights. The truck is topped off with PPG Lexus Desert Sand paint and polished to a remarkably deep shine. 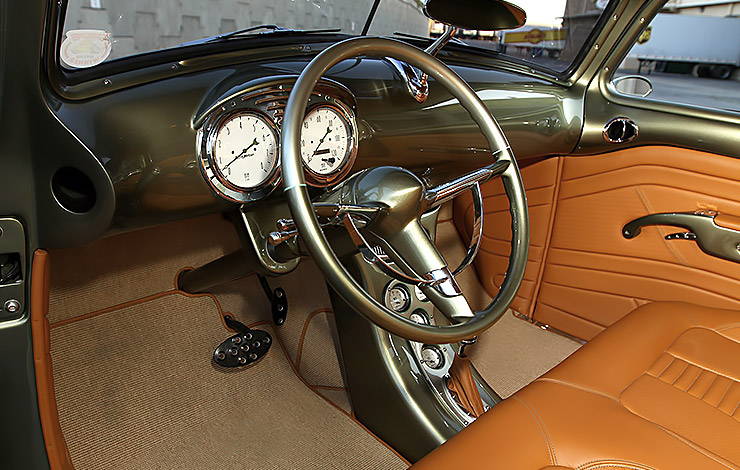 The interior of the truck is just as impressive, featuring a custom stitched leather bench seat and matching door panels, a custom wraparound dash with Auto Meter custom shop gauges and AC vents for a Vintage Air air-conditioning system and a custom body-color center console, which Dermie crafted himself. 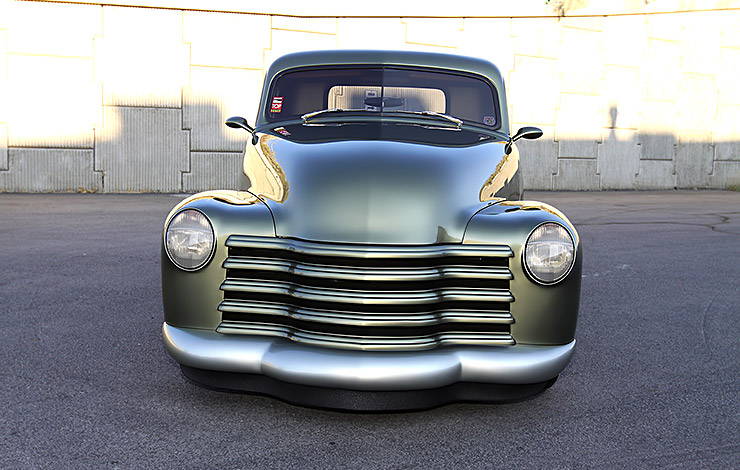 The truck is also fitted with a full Kicker sound system and a number of SoCal and Autolock switches, adding to the modern flare of the custom truck. With such an amazing build in his stable, we can’t help but wonder if there will be another from the talented hands of Mr. Close in the future. Regardless, this custom Chevy 3100, dubbed Project Dream, is certainly living up to its name.