1970 Oldsmobile 442 W-30 was the highest water-mark of Oldsmobile performance. 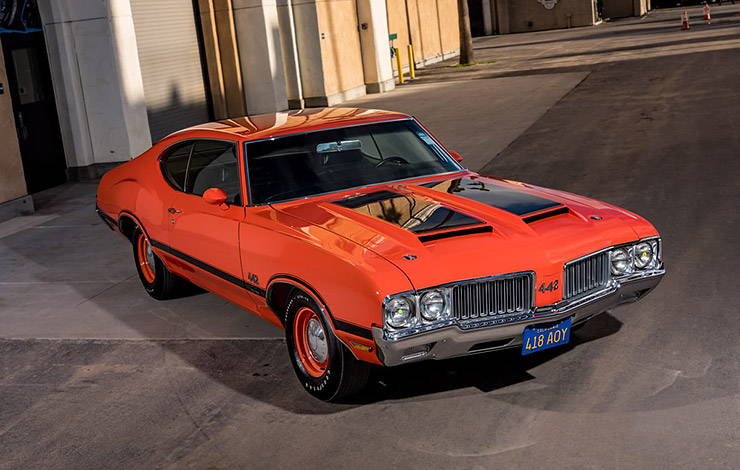 Each of the “Big 3” had their own incarnations of what high performance should be packaged as with each internal division churning out the latest and greatest in renditions of raw horse power and artistic interpretation with the body design.

What makes 1970 so intriguing and special with muscle cars is the lifting of corporate mandates limiting cubic inch displacement (CID) of engines in certain body styles and the soon to be enforced laws in fuel usage and emissions being instituted in 1971. All the manufacturers were placing large cubic inch engines in the smaller body styles in order to achieve the ultimate in horse power to weight ratio. The Oldsmobile division of General Motors was certainly no exception and utilized their own successful selling muscle car – the 442 – having already produced several models it beginning back in 1964.
– 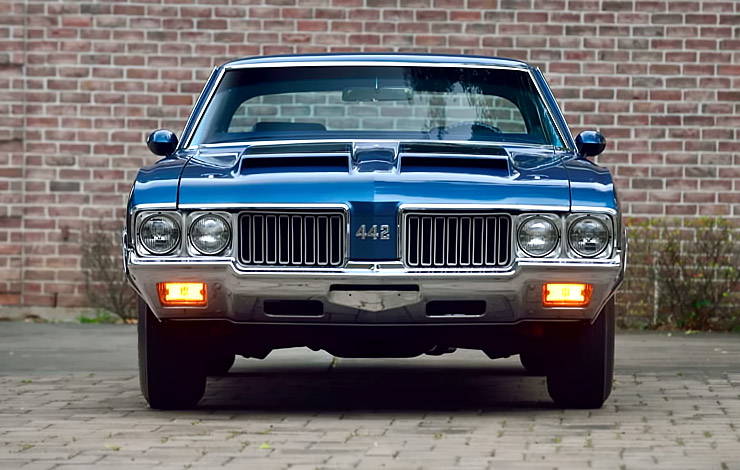 It was with the 1970 model year that Oldsmobile released the ultimate 442 W-30. This was an option package available for those individuals who craved more than just a fast car; they craved a fast looking car that would make all others sit up and take notice. The Oldsmobile 442 W-30 in considered the crowning achievement of Oldsmobile’s saga to garner a younger market. This option included a 455 CID high compression engine, performance cam shaft, specially designed exhaust manifolds, aluminum intake manifold, dual exhausts, tuned Quadra-Jet carburetor, big valve cylinder heads, and more. The W-30 nomenclature was derived from the option code of this particular package and this included the W-25 option Ram Air Hood with air induction air cleaner assembly.
– 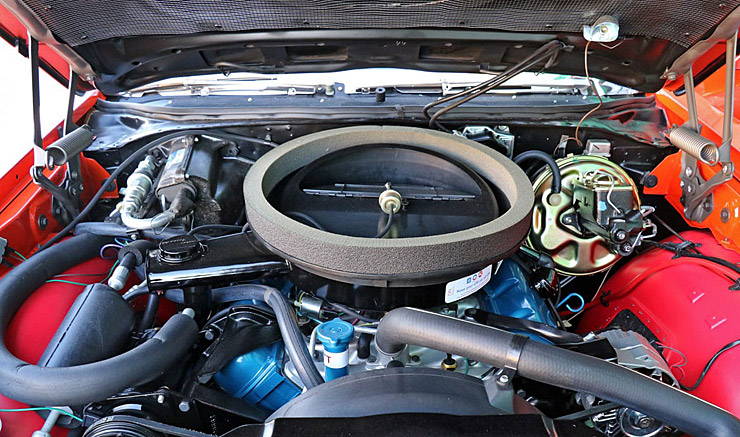 The most wicked (performance-wise) of the 442 W-30’s was the so-called “328” cam interpretation, aptly named after the degrees of duration of the cam shaft, placed in a select few manual transmission vehicles. The transmission was manual because the cam did not pull enough vacuum to make an automatic function properly. In fact, the only thing “power” on this muscle car was the steering. The front brakes were disc but non-power assisted. This configuration also received the “insulation delete” option to reduce weight.

The Quadra-jet carburetor’s primary metering system was removed at the factory due to the lack of vacuum and instead were installed smaller jets without any primary metering rods – in essence, it just dribbled gasoline. The manual shift design was a close-ratio 4-speed Muncie with a Hurst shifter. Additionally, one of the more distinctive features of the 442 W-30 was the red front fender wells. This baby screamed muscle car and high performance. 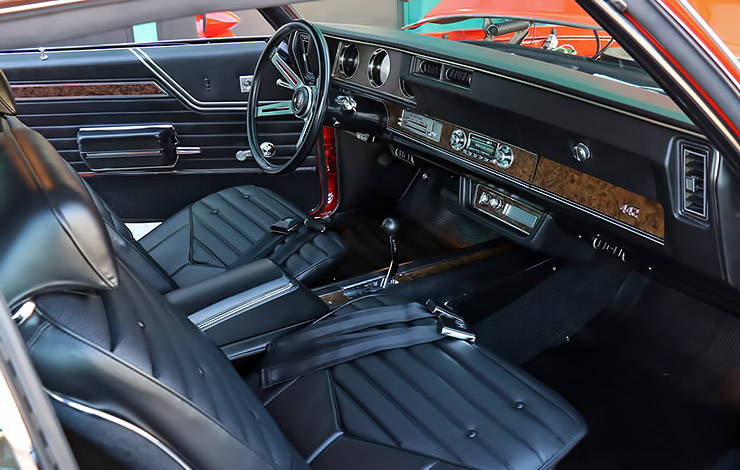 Additional options offered included the W35 (rear wing/spoiler) and the W27 which in 1970 was an aluminum differential and cover. The FE2 suspension package came standard with the 442 and offered a stiffer ride with front and rear sway bars and boxed control arms so not only could you go faster than most, you could also handle with some of the best. The 442 body was the exact same as the Cutlass/F-85 A-body and at that time, was considered a mid-sized car.


The addition of the big block 455 engine brought the overall weight of the 442 W-30 just over 3,700 pounds. The massive engine cranked out 370 hp and a whopping 500 ft. lbs. of torque making this beast extremely vulnerable to traction loss and tire smoke. There are no “certified” or “verifiable” statistics for the 328 cam 442 W-30 but suffice is to say that the horsepower and torque ratings would increase significantly. 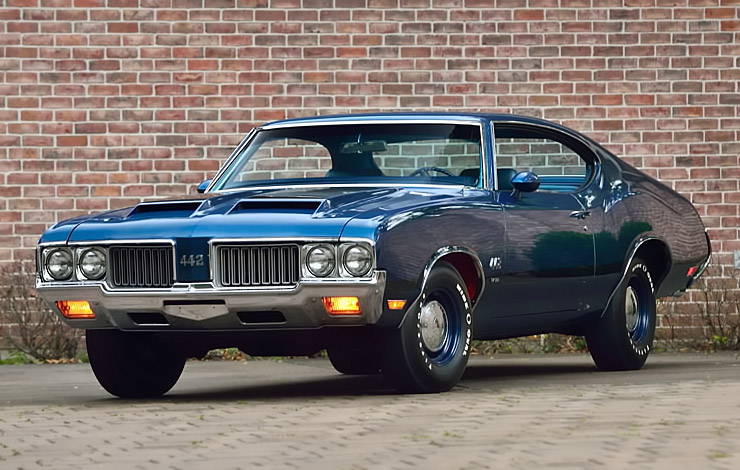 Oldsmobile 455 engines perform better with higher duration cams rather than higher lift. Camshaft lift is the measurement of how much the valve is opened off of the valve seat and is discerned in fractions of an inch. The duration specification is the length of time the valve stays open, thus Olds 455 engines like the valves remaining open longer. However, the longer the valve is open, the lower or reduction of vacuum is incurred making many power assisted features inoperable on the 328 cam 442 W-30. So in order to gain more horsepower, you sacrificed comfort accessories that are taken for granted today. In fact, there aren’t all that many licensed drivers today who could operate a manual transmission, let alone one with an 11″ clutch that is a spring actuated friction type rather than the wishy-washy hydraulics of today. Try holding in that “bad boy” on an incline at a stop light for more than a minute and then try to release it and engage the clutch without rolling into the car sitting behind you. 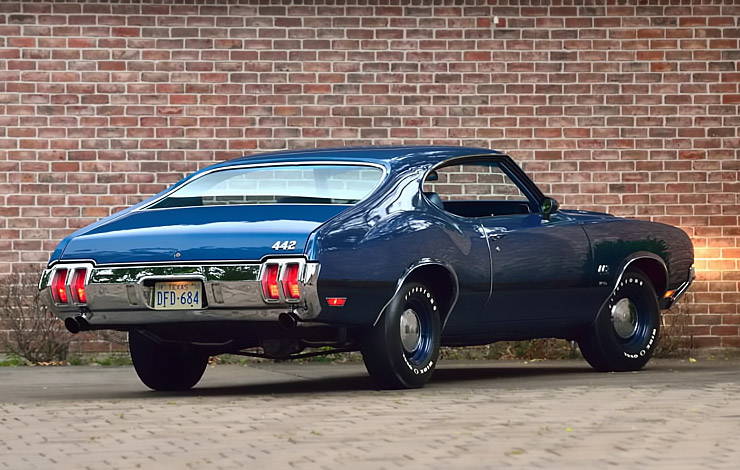 So what was it like to drive one of these muscle car monsters? Sheer delight, exhilaration, and a twinge of fear mixed in for good measure. The 1970 Olds 442 W-30 328 cam car was a sweat bath in the summer but the terror of both the street and drag strip. When your tires gripped, the entire front end would rise up and block your view of the road ahead. The massive influx of air being ducted into the carburetor through the dual hood scoops was a times deafening and amazing to hear; watch and listen to “Demolition Man” when Sylvester Stallone drives off in the 1970 Oldsmobile 442 W-30 and you will get a glimpse of that sound. 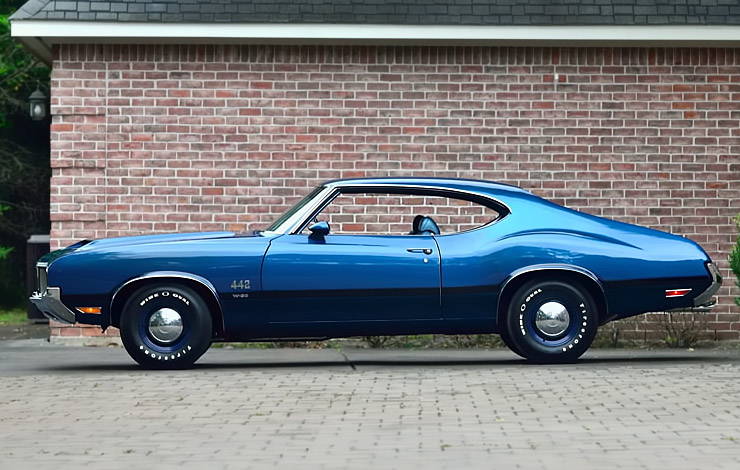 The 1970 442 W-30 was Oldsmobile’s crowning achievement to muscle cars and is considered the most recognizable and distinctive vehicle with the twin scooped ram air hood, body stripes, dual exhaust tips, and rear spoiler. The understated beauty and yet raw brute strength of this machine has never been duplicated. 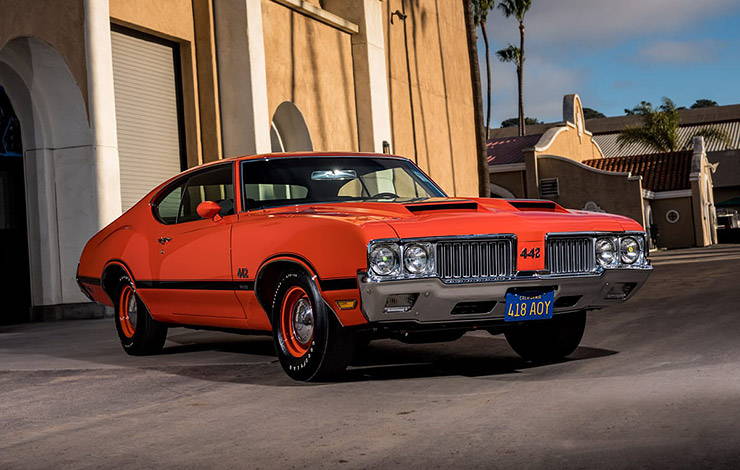 Back in 1970, a 328 cam 442 W-30 would set you back about $4,400.00. This roughly equates to about $30,000.00 or more in today’s economy. Considering the lack of creature comfort features (a/c, power controls, etc.), that is a hefty sum for a stripped down vehicle. But in 1970, anyone who ordered or purchased a 328 cam 442 W-30 wasn’t interested in comfort; they were interested in raw horsepower and speed. This was the only way to go if you wanted an all-inclusive package of great looks, wads of horsepower and torque, and making sure the competition knew you had arrived.