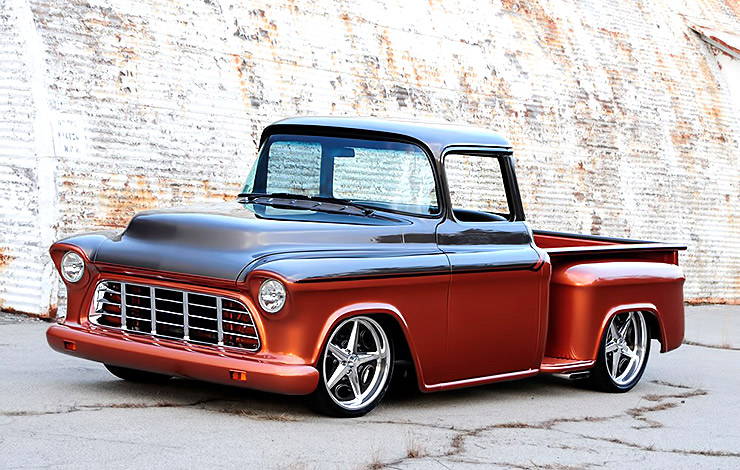 While Chevrolet originally designated their all-new line of trucks (which was the first to feature wraparound windshields) as the Task-Force series back in the latter part of 1955, the collaboration between husband and wife to resurrect one 40 years later is a real task force if you ask us! Ten years in the remaking, the Renaud’s ’56 big-window is not only the couple’s favorite model of classic truck, it’s one fine example of a modernized hot rod classic to boot.

When the project began, it was actually intended to be solely for his wife Elaine as a driver. As things progressed and Joseph got more personally attached, it became a “his and hers” task. With the intent to create a “combination of many street rod build features combined with a clean, classic, contemporary truck flare,” the Renauds also enlisted the help of close friends and fellow car club members to accomplish their goal.
– 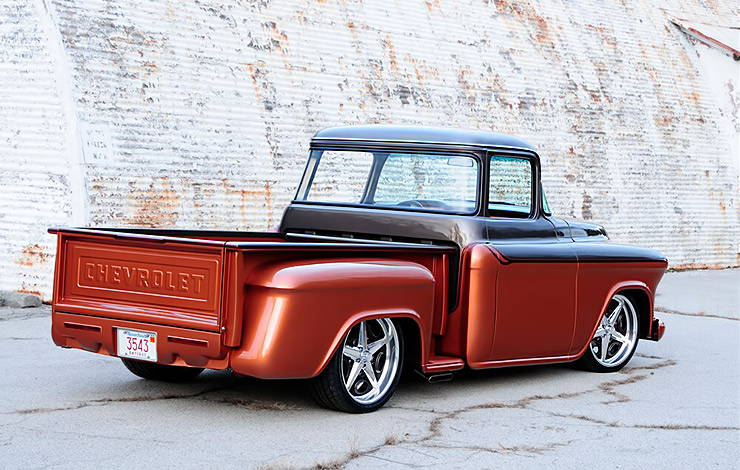 Purchased from a friend who originally intended to restore the truck’s 1/2-ton Stepside’s sheetmetal parts-or what would remain-ended up posing the biggest hurdle, as it was riddled with more rust and so-so attempts to rid the rust than anyone had anticipated dealing with. As it turned out, the only parts that could be salvaged were the basic cab and the hood. That said, plenty of time was spent finding suitable replacement items, be they aftermarket or genuine good old stuff.

With the truck’s externals finally in order, Joseph did his part on the bodywork (including a variety of custom touches here and there) but also utilized the talents of the folks at Creative Speed in Dighton, Massachusetts, to handle the rest. From there, Blair Smith (Hanson, Massachusetts) expertly applied the PPG Amber Pearl Mist paint. Intro’s Sport model wheels in the 17-inch variety were used to help enhance that contemporary flare the Renauds were after. 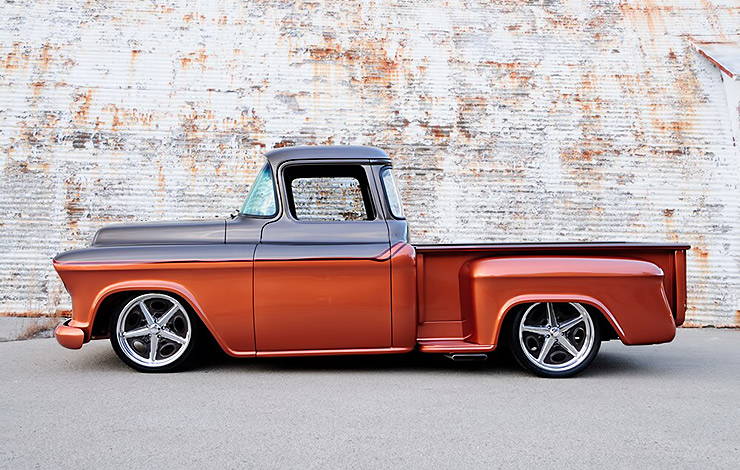 That “flare” was not spared on the inside of the cab, either, as Joseph applied his creative custom touches throughout the interior. Along with the fancy metalwork, including the intricate dash features and center console, the ’56 was outfitted with enough beige twee and leather to provide the couple with ample luxury to not only cruise in style, but in comfort, as well.


Fred Carrello (Warwick, Rhode Island) is credited for creating the theme, which uses a RodDoors seat, custom paneling, and Lexus carpet. A wide array of Pioneer sound system components and Vintage Air were used to help enhance that comfort level the Renauds now take every advantage of. 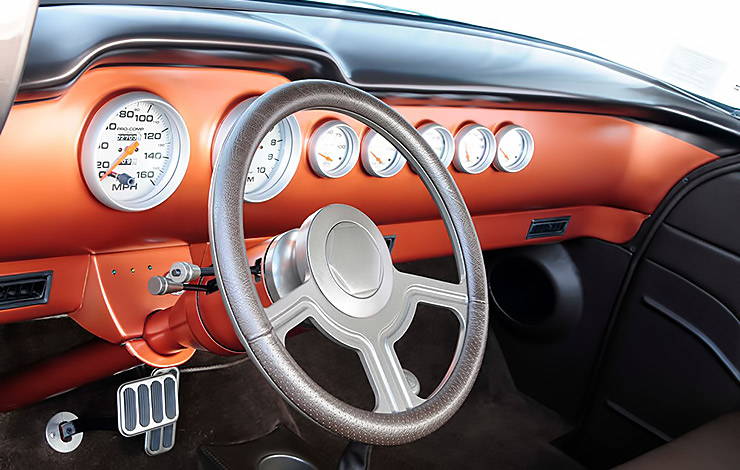 With the bar set at such a high level for all of the Chevy’s visible parts, do you think Joseph would settle for any less when it came to the chassis and drivetrain? No way, nohow. The stock 1/2-ton equipment was swapped out for a Fatman Fabrications IFS, RB’sObsolete parallel leaf kit, and a Ford 9-inch rearend-all attached to a completely detailed (color-matched) frame. 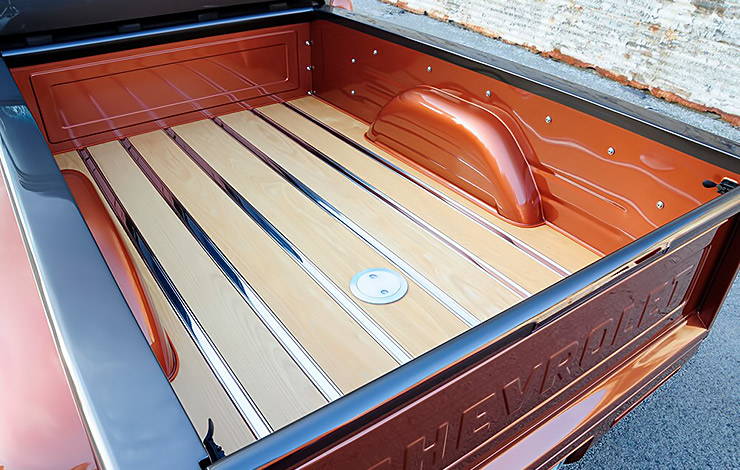 In front of the 3.55-geared differential lies a Turbo 400complete with a TCI converter and a B&M; Shift Kit. The final driveline component is anything but your typical engine fare-try a Gen V 502ci big-block outfitted with all that Joseph could throw at it for flare and performance (Speed Demon 750 carb, CranePowermax cam, Street & Performance air cleaner, and Zoop’s front drive system, to name a few). In other words, like the interior, the truck’s mechanicals look just as good as they perform. 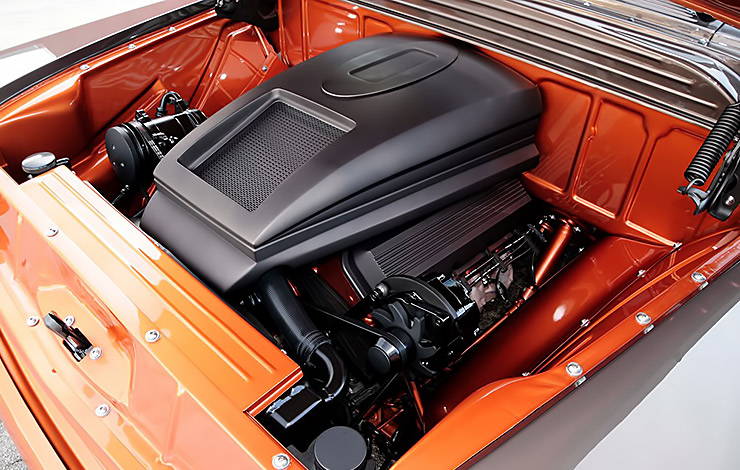 Because Joseph had found that the color of his ’56 Chevy pickup is what first attracts a crowd, he nicknamed the truck “Coppertime.” All we can say is this is one classic Chevy with a decadent vibe, wicked stance, and endless good looks. 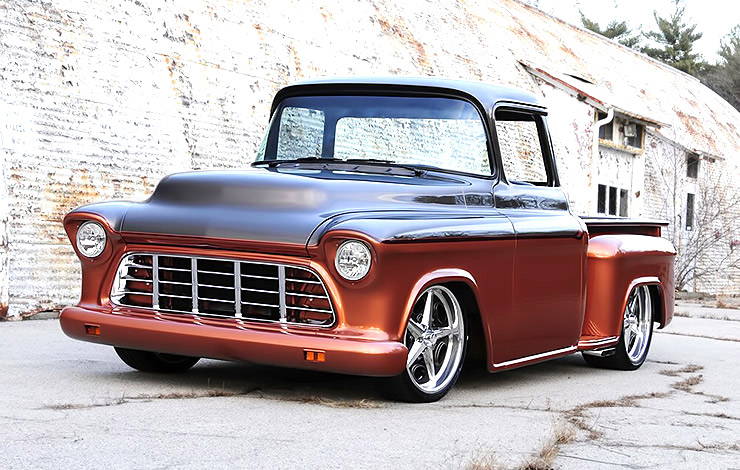