1955 marked the first use of the Crown Victoria nameplate by Ford and it was part of the top-of-the-line Fairlane lineup with a wide stainless-steel band “crowning” the roof.

It can be argued that the world of automakers changed with the invasion of World War II. The business of building cars was stopped as manufacturers devoted their facilities to defense. When the final enemy surrendered in 1945, it took a little time, but soon the automakers were back in the business of producing cars.


At about that time, the attitude of the American people was shifting. Times were good, especially when compared to the economic woes that preceded the war. The automobile was still somewhat of a status symbol, but it was gradually becoming more functional and fun. Trips to the beach, family picnics and even family vacations began to take on new meaning. It seemed like everyone wanted to have a car … or two.
– 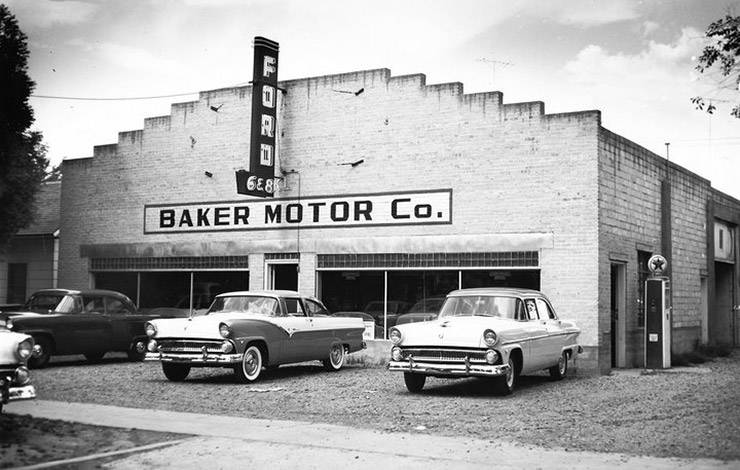 By the mid-’50s, the automakers were keenly aware of the public’s perception of their product. Without becoming outright pedestrian, there was a need for practicality without giving up style. There were plenty of challenges for designers and plenty of forward thinking designers to meet the challenge. Nineteen fifty-five was a great year to be shopping for your first new car.

Some of the most iconic cars of the 20th century were created in the 1950s. The Corvette came about in 1953. Ford had the two-seater answer in the “personal luxury car” they called Thunderbird for 1955. While not a big seller new, Chevy’s ’57 Bel Air has made hearts flutter for decades. There could be many more depending upon your tastes, but the bottom line is that the cars of the ’50s (for the most part – think Edsel) were built for memories. 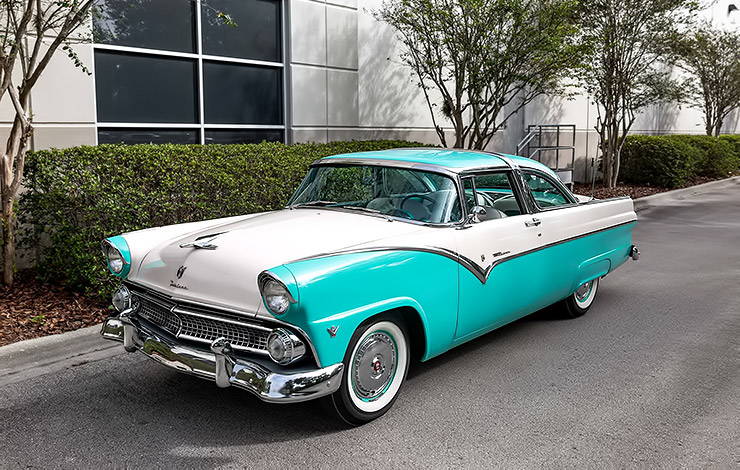 When the Fairlane series was introduced, named after Henry Ford’s home, a somewhat familiar name joined up. The Victoria, released in 1951 on its own, was merged into the group and offered up a new “Crown Victoria” pinnacle within the framework. On its release four years earlier, Ford positioned the Victoria as the first genuine hardtop and, for now, it would carry that mantle. 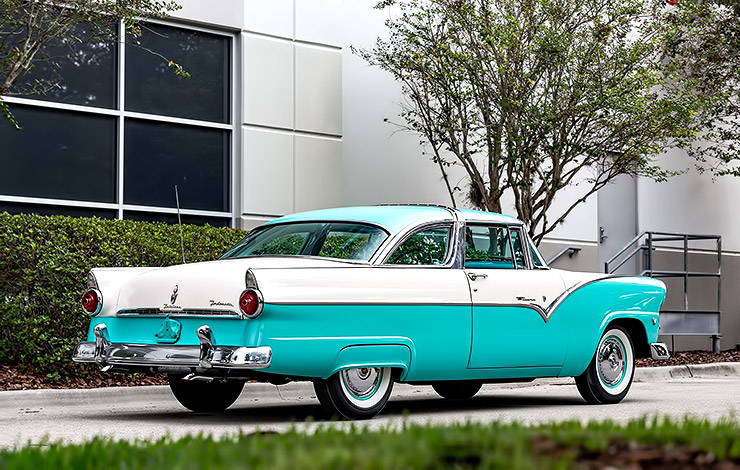 Like many of the cars of the day, the original owner of this 1955 Victoria example took advantage of the two-tone paint palette, utilizing the blue and white combination. Choices were seemingly endless as a walk through the show field even today will often find a half dozen Fords of the era, all with different paint combinations. The more common survivors seem to be blue-and-white, red-and-white and a few other “and-white” combos. 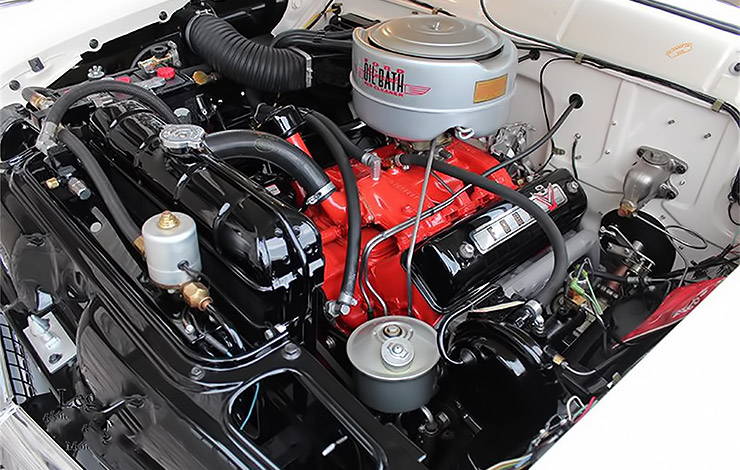 This car is powered by the 272 cubic inch Y-block, generated 162 horsepower with the single Holley two-barrel. Ford had stepped up the commitment to V-8 engines. A 292 cubic inch model boasting 193 hp remained the top option, but this powerplant was a popular choice among new car buyers who weren’t worried about gas being 29 cents a gallon.


Few options can be found on the car. It could have had dealer-installed seatbelts or a Select-Aire air conditioning system, but the original owner wanted none of that. The only option boxes that saw checks were the power points – power steering and power seat. 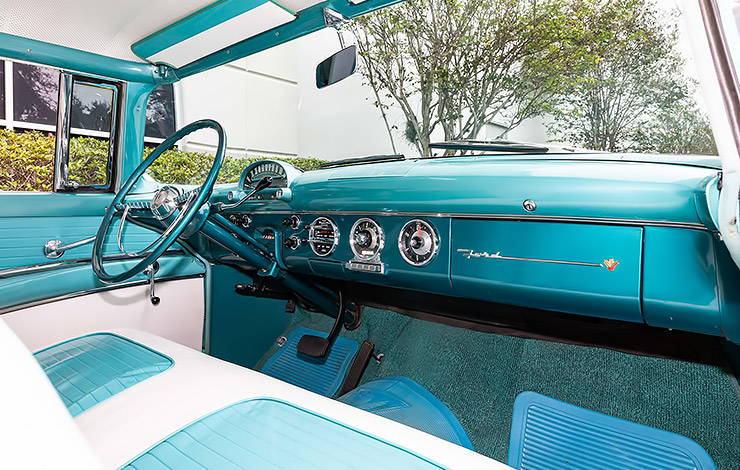 The engine mates to the Fordomatic transmission that is original to the car. The wide whitewalls are symbolic of the period, as are the flying saucer disc wheel covers seen on this ride.

Ford kept the Victoria name, often preceded by “Crown” until 1965. It was brought back 15 years later and carried the Crown Victoria designation from that point forward. 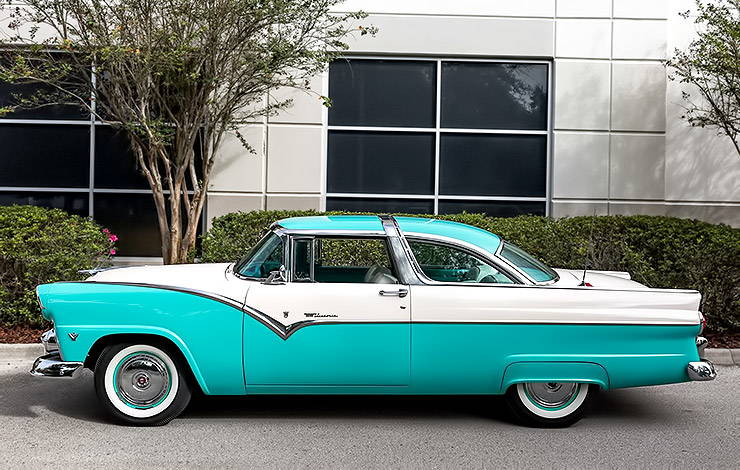 The times were different, but the idea was the same. The consumer really wants a car that can look good, run good and last. In the mid-’50s, surviving automakers got it right as the cars produced have stood the test of time, continuing to earn respect long after the last one rolled off the assembly line. That’s clearly a Victorian victory. 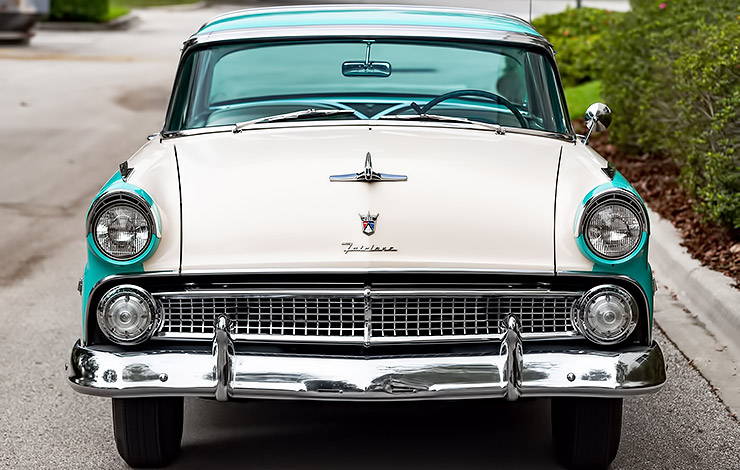