Is this cool or what? Millions of people believe the Ford Thunderbird is the coolest car ever made. 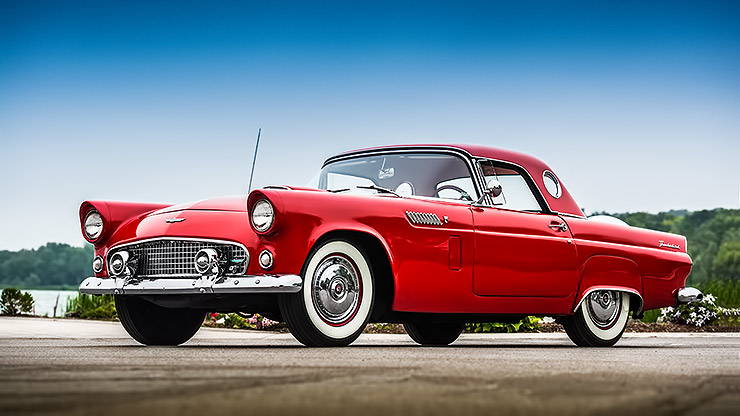 Here’s a car that was created by an auto industry famous for making six passenger boxes on wheels with a little power and even less style. In a flash, the Thunderbird trashed all those conventional ideas and made a whole new set of rules. The T-Bird had plenty of room…for two people.

It was racy without looking like a hot rod and it looked equally proper with its driver dressed in evening wear or racing coveralls. At the time, except for a few hand built roadsters, the US market for sports cars was virtually non-existent.
–
The History of the Ford Thunderbird
–
Chevrolet had broken the ice in 1953 with the Corvette but in  two years they had managed to sell less than 4000 cars. Not exactly the kind of numbers that would lead anyone to believe that Americas were starving for sports cars. But when Ford looked at the Corvette, they didn’t conclude that people didn’t want sports cars. They said, “People don’t want that Sports Car! We’ll give ‘em what they want.”
– 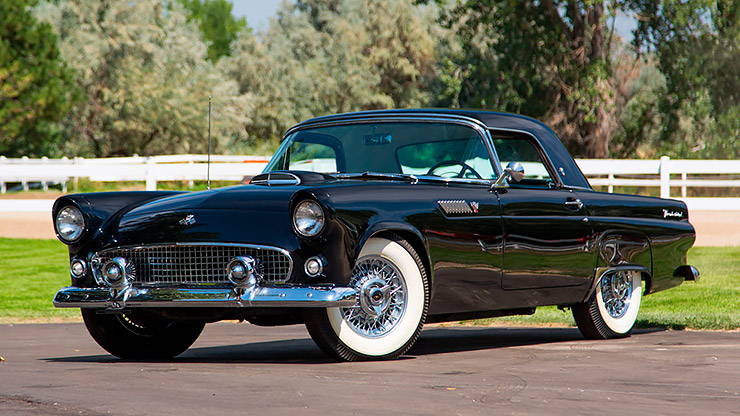 Keith Maney, the editor of Year One’s Restoration Review notes that “It’s important to realize that developing the Thunderbird, there was really no rule book to follow.

I mean, after all, American manufacturers didn’t build two seat cars until, of course, the Corvette came along. Since there were no hard and fast rules that needed to be followed, the engineers and the designers could really go wild. And of course, as everyone can see, they did a wonderful job.” The Ford Thunderbird – A Personal Luxury Car
–
On October 22, 1954, Ford rolled out its version of the sports car and it was American in every respect. Ford called it a personal luxury car, from its deeply upholstered bucket seats to its engine turn dash with a full complement of gauges. The whole look and feel was upscale and sporty. And America ate it up. Comparisons between the Thunderbird and the Corvette were inevitable. 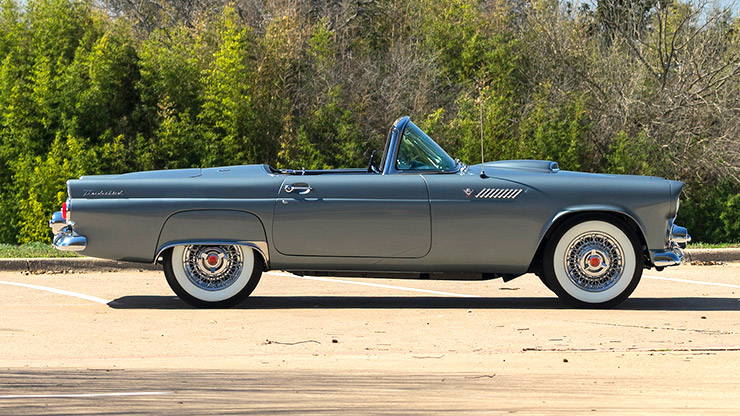 Both the Thunderbird and the Corvette were built on 102 inch wheel bases, but the T-Bird measured in at almost eight inches longer than the Corvette. It was unmistakably Ford from bumper to bumper. Its low stance almost six inches lower than a Ford Fairlane and its lack of heavy chrome and styling contrivances made it refreshingly different from anything else in Ford’s line or anyone else’s for that matter.


Keith Maney goes on: “It’s interesting to see how the Ford designers did such a good job of coming up with a sporty two seat automobile and yet maintained a lot of family resemblance with the other Ford products of the time. If you compare these cars with a Corvette you’ll notice that the Ford has a long hood, a sweeping deck with fins, it’s a very exciting shape. Another big difference, obviously, in the design and style of the Thunderbird as compared to the Corvette is Ford’s choice of body material. They made these cars out of steel as opposed to fiberglass. I think they did that because they planned to sell a bunch of them.” 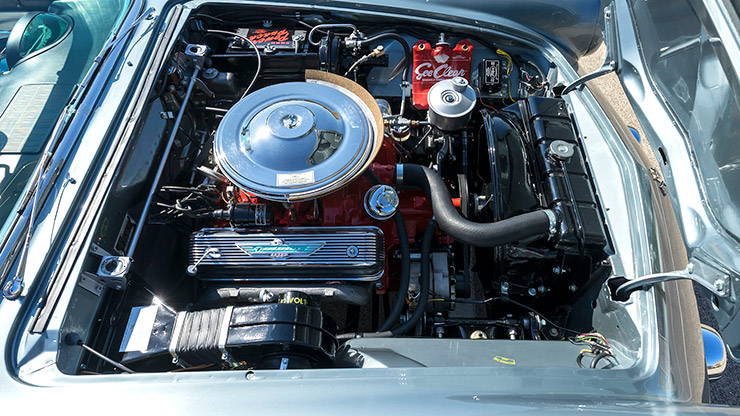 Even though Ford didn’t position the T-Bird as a sports car, they made sure it had enough power to blow the doors off most of the other cars on the road. This little car didn’t just look like it would do 120…it would! One of the T-Bird’s first stops was the speed trials at Daytona Beach, where this cute little runabout quickly established itself as a car with muscle. Ford’s reliable wide block 272 cubic inch engine had been bored out to 292 to create a special engine for the T-Bird.


This Thunderbird sported 8.1 to 1 compression, a single four barrel carburetor and dual exhaust to make 193 horsepower when backed by the standard three speed manual transmission. With the optional two speed automatic trans, the compression was up to 8.5 to 1 giving five more horsepower. When they tallied up the sales figures for 1955, Ford was delighted with America’s reaction to the Thunderbird. 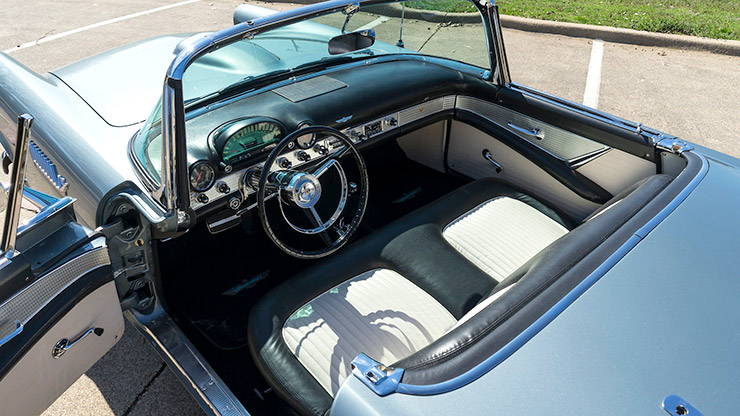 16,155 lucky people became T-Bird owners in the car’s first year, which was just a small fraction of the people who actually wanted one. “They were real, real strong selling and they sold all of them fast. There were very few on the showroom floors and they sold them all just as fast as they came out” recalls one car enthusiast.

Maybe the T-Bird didn’t earn its fame as a tire burning stoplight drag racer like most muscle cars. But the cars we all love and remember are the ones that changed our lifestyles. At the very top of that list is the Ford Thunderbird. Thanks to the T-Bird a generation of Americans, both young and old, started thinking about cars as more than just transportation. But as a symbol as freedom. Because of this, the Thunderbird set a standard of cool that maybe no car will ever achieve again.
Unless it’s another Thunderbird!