This ’55 Chevy was basically scrap metal before Dennis Hansen got his hands on it. 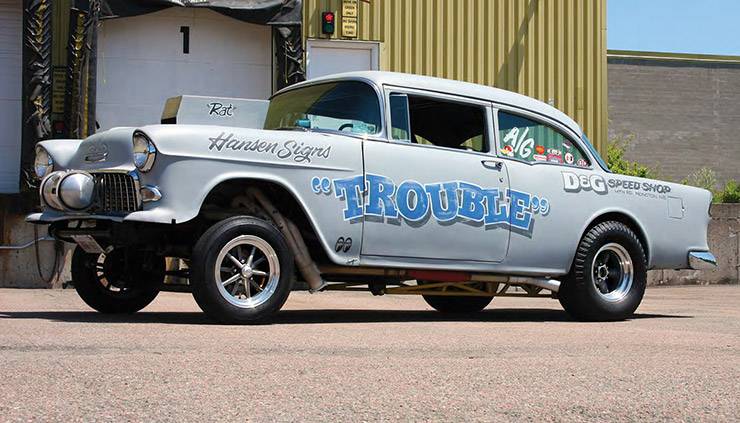 Now it’s a street legal, bare bones, bad ass tip of the hat to a time when straight axle doorslamers were the king of the quartermile. He calls it Trouble and we say this kind of trouble is lots of fun.

Two Lane Blacktop was a commercial failure when it hit movie theatres in 1971 but in the decades since it has become an iconic hot rod movie. Dennis Hansen was always a big Tri-Five Chevy guy and from his younger days he dreamed of building a similar asphalt-shredding, Rat-powered, bare bones car. “I wanted something bad, loud and rough…a car that I didn’t have to wax,” says Hansen. “I never saw the movie until the late 1970s and I just loved it because of the car…I didn’t think it was a very good movie.”
– 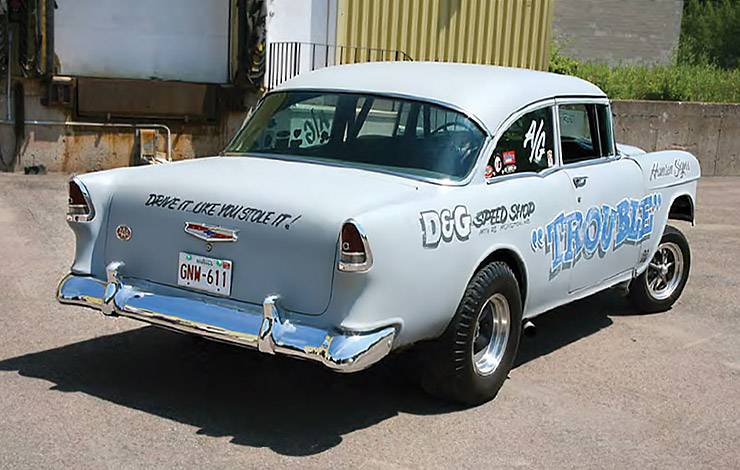 He even had an opportunity to own one of the two surviving TLB movie cars. Three ’55 Chevys were used in the movie. One was a camera car, a second “Hero” car was used in primary shots and a third stunt car was used in American Graffiti and was damaged in the rollover scene at the end of the film. That car was eventually scraped. Hansen’s friend, Greg Murphy, briefly owned the TLB camera car though it was by that time a gentrified street machine with gloss paint and a more lavish interior. “He bought the car out of Ontario and I was supposed to end up with it if he was to sell it but it ended up being sold to the US,” says Hansen.

In 2009 Hansen was introduced to Plan B of his gasser dream, which turned out to be a basket case 1955 given to him by a friend in Bathurst, NB. “There wasn’t much left of it,” says Hansen. The rockers were gone, the floor was gone and half the trunk floor was missing. “I had to use ratchet straps from the door frame to the quarterpanels so it wouldn’t fold up when we loaded it.” But there was more bad news. An earlier loading incident with an excavator had shifted the roof line of the car and the front clip was so rotten it was beyond repair. This fragile shell was perched on a bare ’55 Chevy frame which had to be loaded on the trailer on top of a old Chevy Caprice frame so it could be rolled off once delivered to Hansen’s shop. 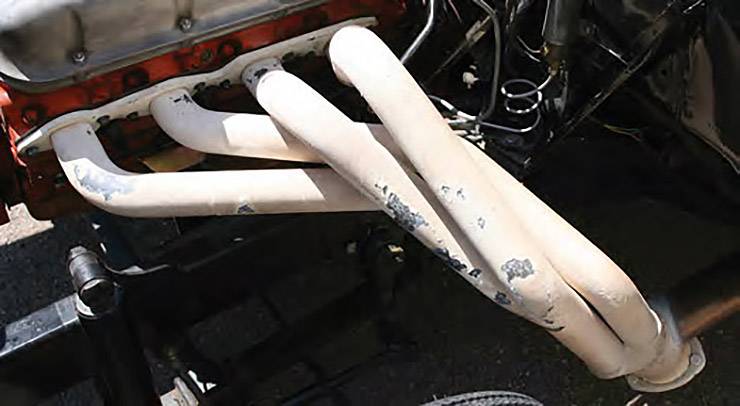 For some this might appear an inauspicious start to a project but Hansen’s been building and restoring cars for years and wasn’t intimidated. He pulled the body off the frame, had it sandblasted then hung it on a rotisserie and buddy Ross Seeley replaced floor pans and trunk pans while he replaced rockers and reskinned the doors and dealt with the misalignment issue. He also radiused the quarterpanel wheel well openings using flat stock for rigidity then tidied up the wheel lip edges using 3/8 fuel line. He found a fibreglass front clip in Cape Breton that came off an old race car. He then fabricated the famous TLB mailbox-style (or Grump Lump for Jenkins fans) aluminum hood scoop and pop rivited it to the fibreglass hood. Hansen spent months doing bodywork and when all the sheet metal work was completed he sprayed the entire car in epoxy primer followed by Dupont grey high build primer.


When it came to the chassis, Hansen bucked off the ’55 Chevy front clip at the firewall and built a lighter, squaretube unit in its place. A 1957 Chevy truck straight axle with parallel leaf springs and tube shocks was used and a Speedway adapter kit incorporated 1969 Chevelle rotors and calipers to the axle. Out back Hansen stayed true to the straight-line bruiser esthetic and used a 1968 Camaro 12-bolt rear stuffed with a posi traction unit and stump pulling 5.88 gears. The original 1955 Chevy leaf springs are still in place but a set of old school ladder bars was welded to the housing then attached to custom inboard frame mounts that allow for adjustments. Up front is a set of 15”x6” ET Gasser wheels shod in 5.65×15 Pro Trac drag radials while out back 15×10 American Racing Torque Thrusts are shod in Firestone DOT approved Cheater slicks. According to Hansen the slicks don’t have much tread left. “Too many burnouts,” he says. Hansen gets boiling and shreds those helpless Firestone’s tires thanks to 468-ci BBC built by Paul Arsenault of P. A. Performance. 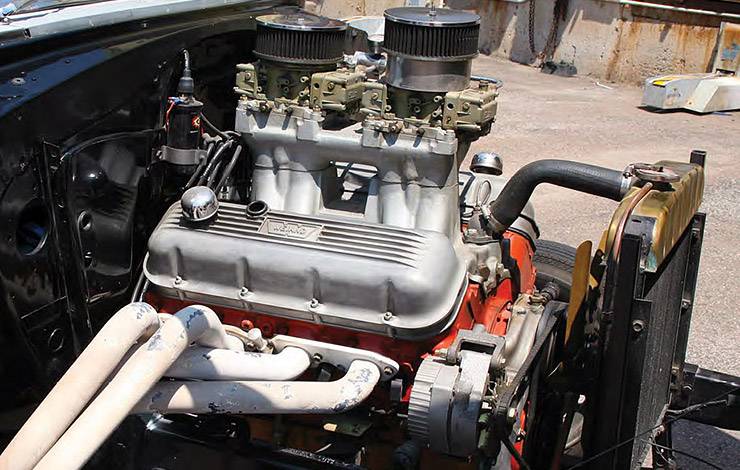 Starting with a 454 block bored .060 over, Arsenault stuffed the block with SRP pistons and bolted on a set of ported and polished Dart 325 aluminum heads for a hefty 13.6:1 compression ratio. Valve timing is courtesy a Comp Cams solid roller camshaft. Twin Holley 660cfm centre squirter carbs are perched atop a Weiand tunnel ram intake. The engine dyno says the combination is good for 750hp @ 7,200 rpm and 685 ft-lbs of torque @ 6,100 rpm though that was with a single, 4-barrel 1080 Dominator. Spent gasses exit the big block via a set of capped fender exit Heddman Hedders which also flow into 3’ pipe and through a set of Cherry Bomb mufflers and Heddman glass pack mufflers before dumping out just ahead of the rear tires. Capped or uncapped, driver or bystander, you’re going to hear this car coming. “The radio doesn’t work and it never will,” says Hansen. “I love the sound of that engine and the winding of the “Rock Crusher” tranny.” 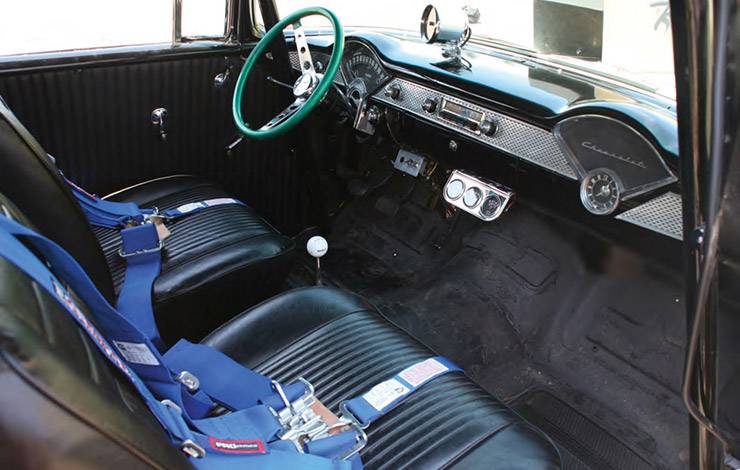 A spartan interior means that sound is amplified by all the uncovered tin. There is a headliner and tuck and roll door panels, but no sound deadener or carpet. A 6-point roll cage, pair of 5-point harnesses and a pair of Corvair bucket seats are interior highlights. A modified Chevy steering column is topped by a Superior style metal flake wheel and the column is linked to a 1951 Ford manual steering box. Hansen says it took a while to get used to the strong arm steering but now he enjoys the workout. 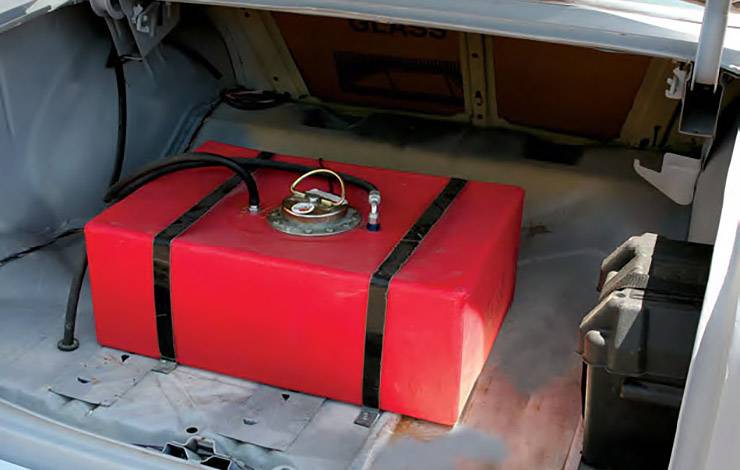 Hansen nailed the stance and the drivetrain for his gasser dream build but thanks to his sign painter brother, Brian, the car’s cool factor was increased 10-fold after a clandestine art endeavour. “I had the car ready for finish and was going to do it the next day when I walked into the shop and there was Brian finishing the lettering job,” says Hansen. “He had been there all night and I didn’t even know.”


Seems Dennis developed the nickname Trouble over the years, we can’t imagine why, so that was painted on the Chevy’s side along with Dennis’ company name, Hansen Signs, on the front fenders and D&G Speed Shop on the quarterpanels. The D&G lettering is an ode to a well known Moncton speed shop owned by Gil Tremblay that dominated the performance scene from the 1960s to the 1980s. “I remember it used to have a 1969 427 COPO Camaro parked out front and my friend Greg owns that car today,” says Hansen. 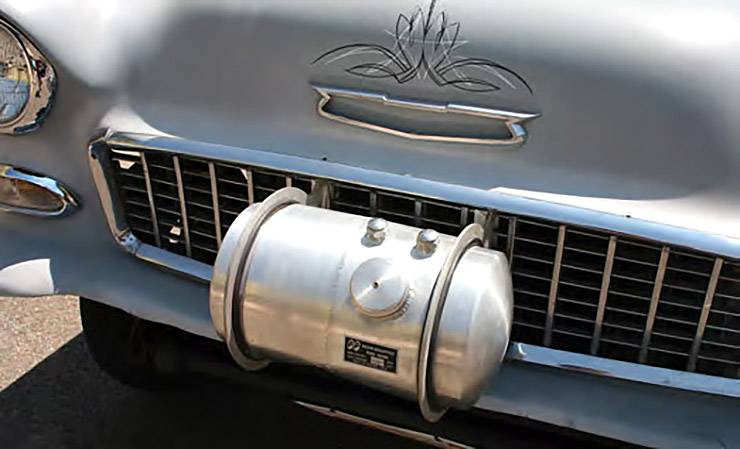 Hansen owns more refined, deadly cool cars, including a pair of 1955 Nomad wagons and two 1957 Nomad wagons, but says he can’t get enough of Trouble’s Rat-infested, primer smeared charisma. The brute force of the BBC and M-22 tranny’s whine creates an intoxicating cacophony that acts like a drug. He no longer thinks much about the TLB ’55 Chevy that could have been his.
He’s created a car that’s just as cool and more reflects his own personality and that’s priceless in a way a movie car can’t be. 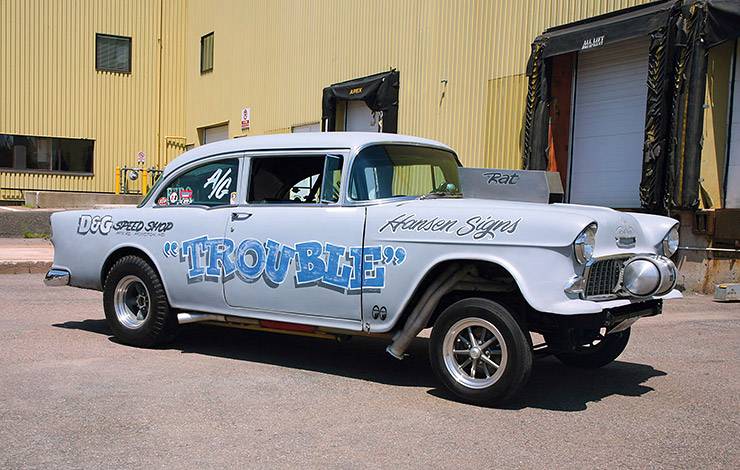