This attractive mid-1950s dream car is one of the few that did become a reality, no matter how short-lived its production run. 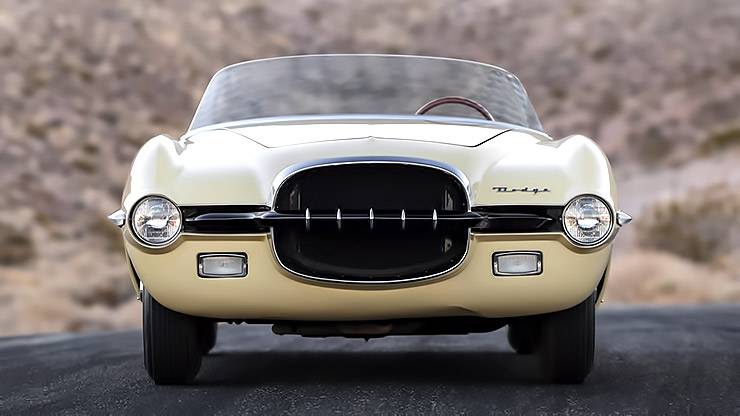 Small, sleek and sporty roadsters and coupes were the hot body styles with which American manufacturers wowed the crowds at the auto shows in the early to mid 1950s. Chevrolet already had its Corvette in production, albeit in very limited numbers; and it was this type of car, the small, nimble “personal” car, that seemed to be on the minds of designers and stylists in all the studios.

The wildly futuristic design elements that would become the norm at the auto shows in a few short years were not present in the concept cars yet. Instead, most of the offerings in 1954 were very realistic interpretations of the sporty personal car.
– 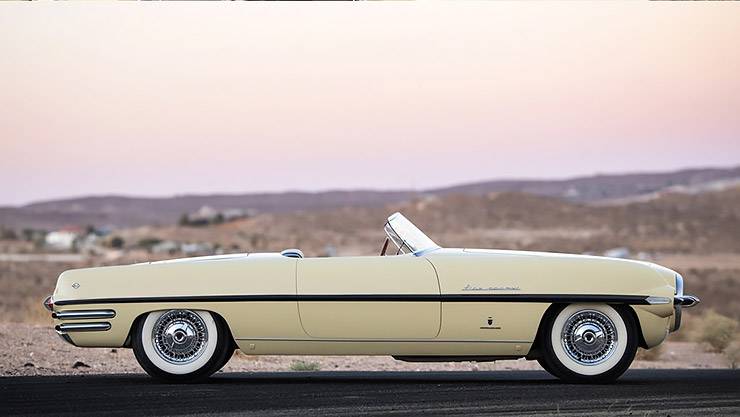 Oldsmobile showed its open roadster, the F-88 of Corvette dimensions, along with a 188-inch-long Cutlass powered by a Rocket V-8. Pontiac’s Bonneville Special, a Harley Earl creation of which two were built, also came out in 1954. Buick had a new version of its Wildcat, the Wildcat II, with a unique open-wheel and flying-wing front-end treatment. Ford perhaps ventured into the unknown the furthest with the FX Atmos, a 3-seat affair with a clear bubble-top roof, high-flying fins at the rear and needle-equipped bullet-shaped protrusions off the front fenders.

Then again, GM also went way out there with its Firebird I, a single-seat concept that was little more than a metal cigar with wings and a vertical fin with working gas turbine engine and joystick controls. Even Cadillac had a pair of show cars in the sporting theme in its open La Espada two-seater and closed-top El Camino. Then, of course, there was Packard’s Panther Daytona, the story of which you can find in our “Oddies but Goodies” archives. 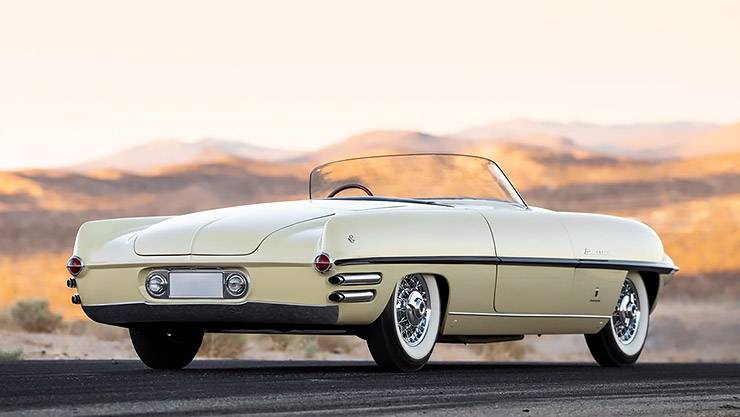 The Chrysler Corporation’s divisions were not about to overlook the idea of creating their own versions of what the ultimate fun little car should be. Plymouth had its fiberglass-bodied Belmont built on a 1954 Dodge chassis and a two-place fastback-styled coupe, the Explorer. Even De Soto was in on the act with its highly aerodynamic Adventurer II. The venerable Dodge nameplate hit the show scene with not one, but four versions of its Firearrow. 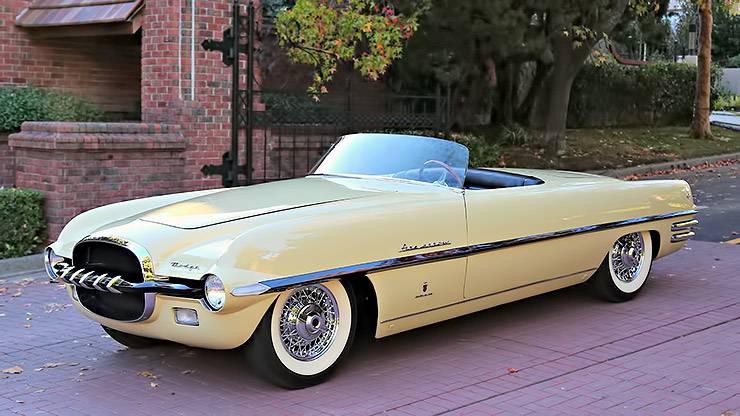 The first two of these were open two-seaters with very smooth overall body shapes accented by a single large trim piece running tip to tail. The third Firearrow was a closed sport coupe, again a two-seater, that went on to earn driver Betty Skelton the Women’s Closed Course World speed record with a 143.44-mph run around the Chrysler Proving Grounds’ high-speed test track.

The fourth Firearrow was a convertible, with styling nearly identical to that of the coupe. Though designed within Chrysler’s studios, all four of the Firearrows were built by GHIA of Italy. At the time, Ghia was under the direction of Luigi Segre, who had succeeded Mario Boano. 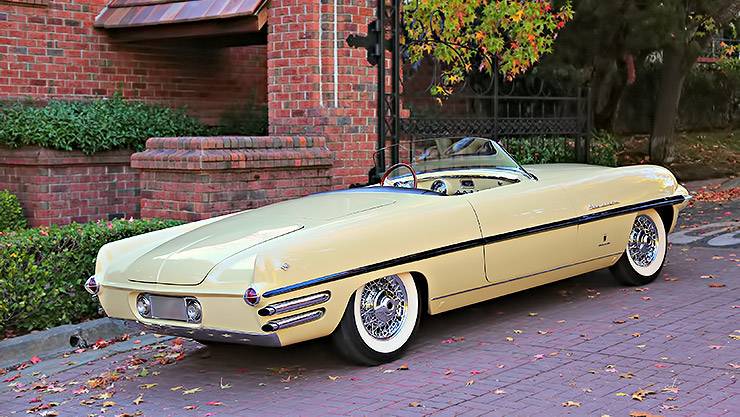 Segre is generally credited with being the person responsible for Ghia becoming involved with the construction of various specials and one-offs for various American automakers. For Chrysler Corporation, the first show car that Ghia built was the Virgil Exner-designed 1951 K-310.


The Firearrow convertible as shown here is unchanged from the form in which it appeared at the auto shows. Like the other Firearrows, it was based on the basic 1954 Dodge running gear. 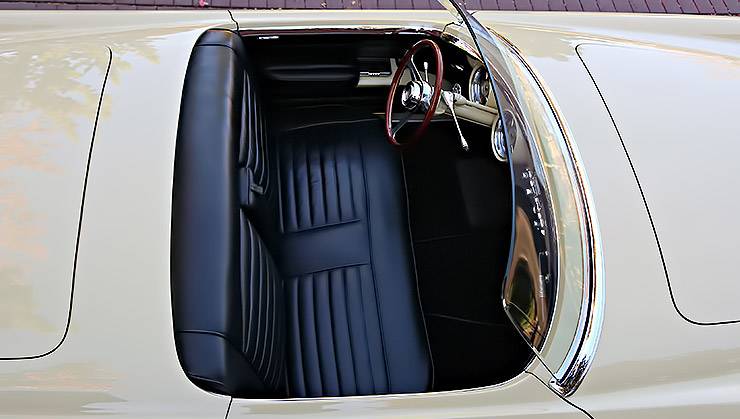 Among its features were adjustable bucket seats, with the rear seats being removable to allow access to a mahogany luggage platform. Of all the previously mentioned show cars of 1954, the Firearrow convertible perhaps proved its worth the most, which inspired a limited production run of automobiles. 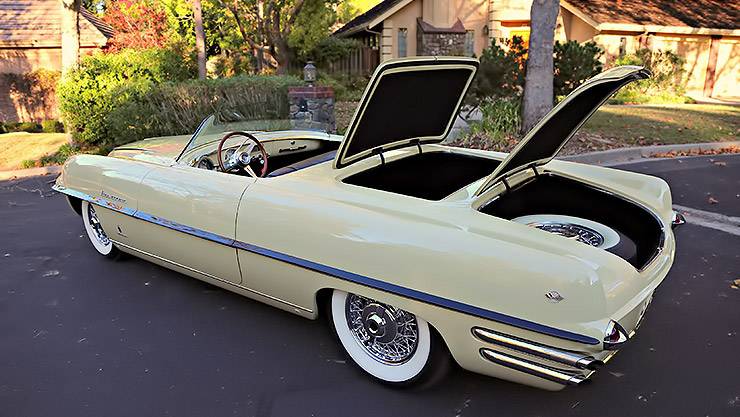 Having seen the Firearrows on display, Gene Casaroll, the owner of an automotive shipping company, negotiated for and acquired the rights to put a car of very similar design into production. Organized as Dual-Ghia, Casaroll’s company had Ghia construct the cars on modified Dodge chassis with D-500 V-8 engines and Powerflite transmissions. 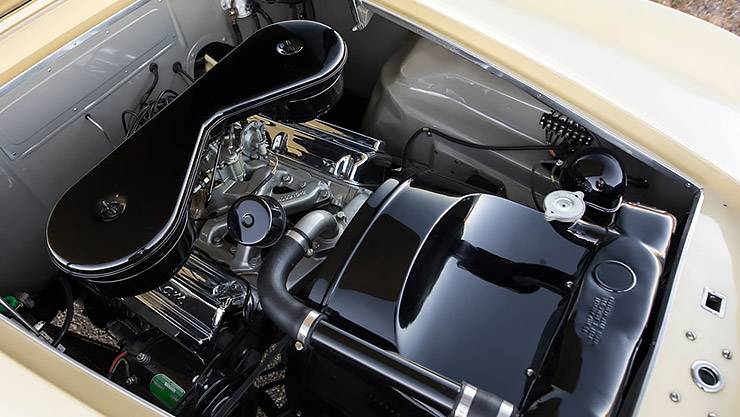 Production spanned 1956-1962, with the original Firearrow styling only mildly changed during the initial production run; later, the styling was revamped, giving an even more Italian look to the front end. All told, some 117 Dual-Ghias were built. Few and far between are the show cars that have gone from creative concept status to actual production. Dodge’s Firearrow convertible can make that claim.