You’ve always wanted a vintage camper with all the modern amenities in it? So do Russ Moen from Vancouver, British Columbia.

Did you know that American business magnate, record-setting pilot and engineer Howard Hughes build a camper on the back of a Chevrolet cab-over truck? No? But Russ Moen knew that and he thought that it was a brilliant idea, which is why he transformed a 1954 Chevrolet cab-over truck into the Tourliner – all alone, at home. Is that incredible, or what?
– 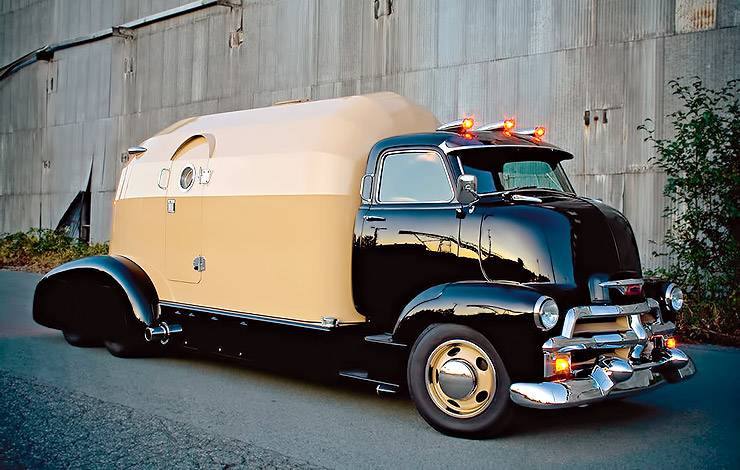 It all started with joining together a travel trailer with a cab-over truck; but, that plan failed, which is why everything had to be built from scratch. Inspired by the Bowlus trailers, Moen went ahead and put Mike Pearson to work, but not without tweaking the hell out of the design. Then there was the issue of weight: Moen had a cab in hand and a camper in mind, but it all started to get a little too heavy.

So, it made sense to start with something built heavy to begin with, something like a 1985 Elite motorhome. As such, a big engine was needed, and Moen’s choice was a 12-valve Cummins, built by diesel drag racer and owner of Harbor City Diesel, Malcolm Cross. He O-ringed the block, upgraded the head studs, and fit a BD Power Super B turbo on an aftermarket manifold.
– 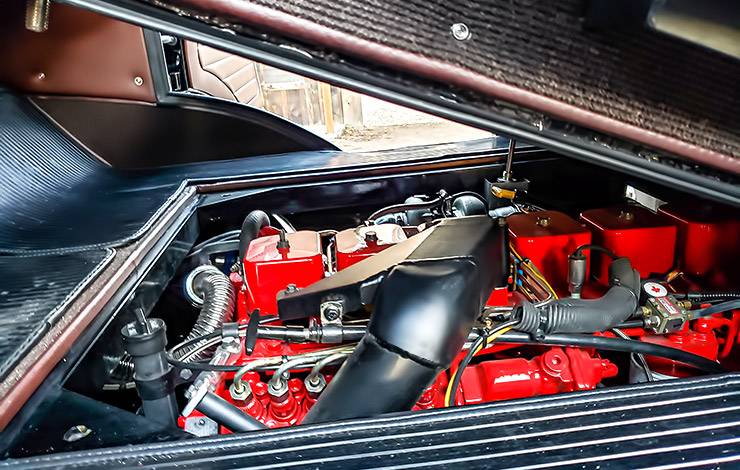 The transmission was built by the people at BD Diesel, in Vancouver, and is more than capable to handle the incredible torque of the engine – 800 lb-ft at 1,700 rpm – with a price-tag to match. Four heat exchangers had to be fitted to keep that engine cool: the radiator from the Dodge, an intercooler, an over-sized oil cooler and the transmission cooler in the radiator tank. Let’s not forget about the Vintage Air SuperFlow condenser. 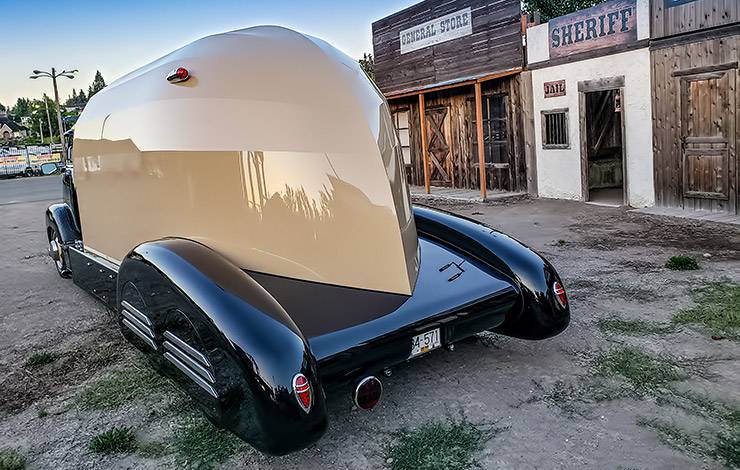 And now, we get to the camper, which Meon wanted to look like an upside-down boat – enter Karl Foeshe. He worked out a CAD design and trimmed 3/16-inch-thick aluminum sheet into strips. Randy Langille and Rick Granneman from R&R Boat Refit and Repair got involved, and built those two mesmerizing fiberglass fenders, with an aluminum apron spanning the gap between them. 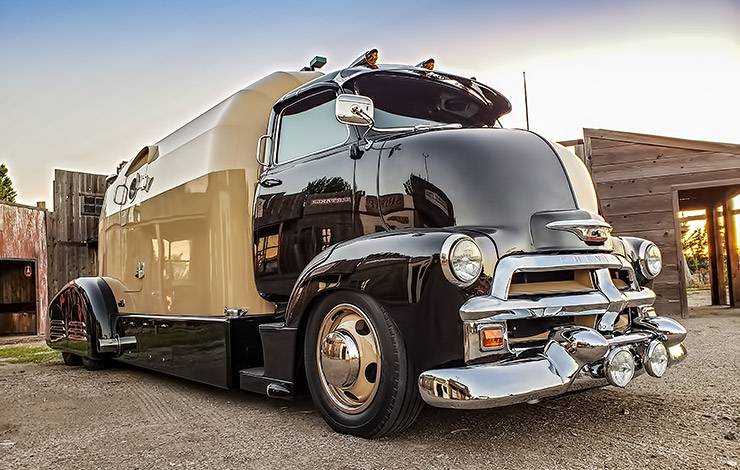 There are various details and components that add to the overall charm of this ‘camper’, such as the extended cab’s rear window, a windshield visor, a ’51 Cadillac bumper and chin pan. The DuPont Chroma Black paint-job is definitely a head-turner. 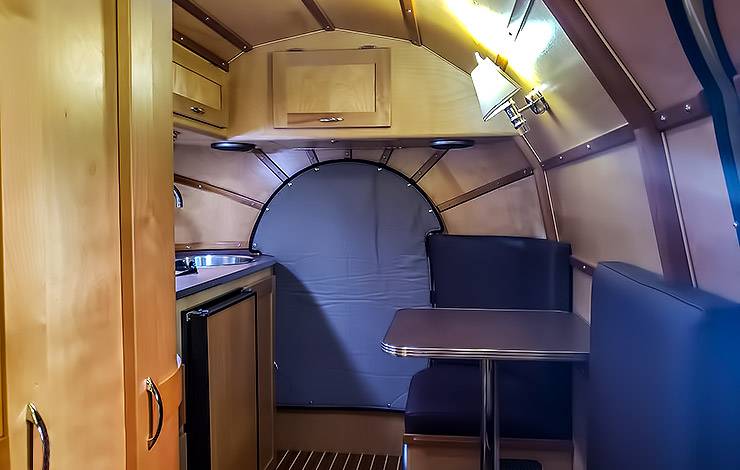 While on the road, this camper will keep Moen completely satisfied; it boasts a seamless shower, a vacuum-cassette toilet, a 75-gallon freshwater tank, and a 20-gallon gray-water tank. At the back you’ll also find climate control, a self-contained Dometic unit, allowing him to really cool off.


Randy Langille and Rick Granneman also laid the teak and maple floor and built the birch and cherry cabinets, which hide a Wallas diesel stove/heater, a Nova Kool refrigerator, and an electric hot-water heater. Nothing but the best, adding to the self-sufficiency of the 1954 Chevy Cab-Over. 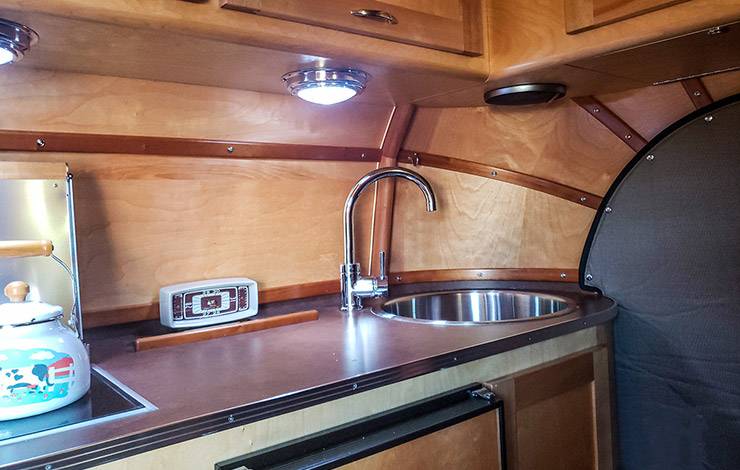 The cockpit features a Dakota Digital combo and solo gauges, an RV steering column and a Vintage Air Gen II Super Cooler, with a Painless Performance harness distributes power. The rod-looking cabin is complemented by futuristic technologies, such as Vision Tech cameras: two mounted in 1939 Chevrolet taillights at the front steps and a third at the back – no more mirrors for this vehicle. 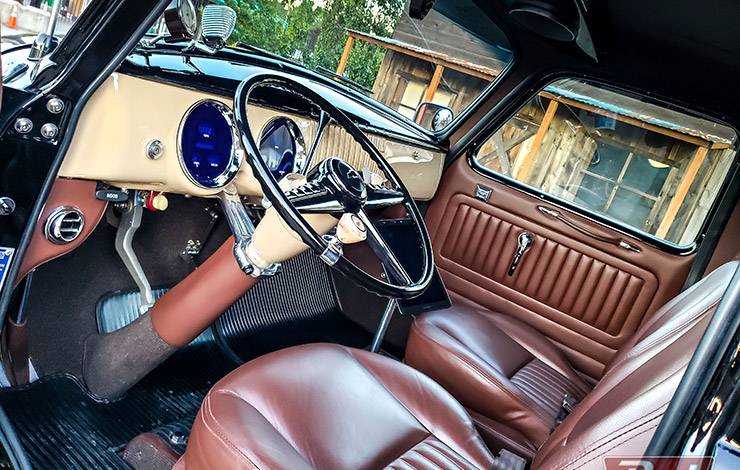 A four-channel Pioneer amplifier drives Pioneer 6-3/4-inch component sets and a 10-inch sub-woofer in a seat base in the camper, meaning there’s always room for a party. Finishing off this project are Ford Windstar cargo seats, square-weave carpets in the cab floor and a set of standard GM 19.5 x 6 wheels, with stainless trim rings and 1949 Mercury caps.


The 1954 Chevy Cab-Over is stunning, to say the least, enjoyable as well as practical. I doubt resting is possible since everywhere you’d go, people are going to stare at it and knock on the door to ask questions and see the interior. But, I guess that’s a small price to pay for driving the most awesome ‘RV’ on the planet. 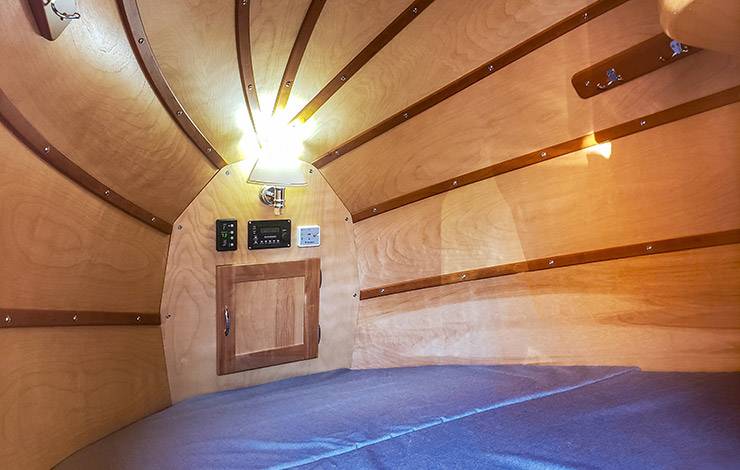 Check out the video below to hear Moen talk about his motorhome in his own words.