With the post—World War II car buying craze, many new car makers entered the market: Kaiser, Tucker, Davis and Playboy to name a few. Playboy attempted to fill a niche in the market for an inexpensive smaller car with superior performance and fun to drive. 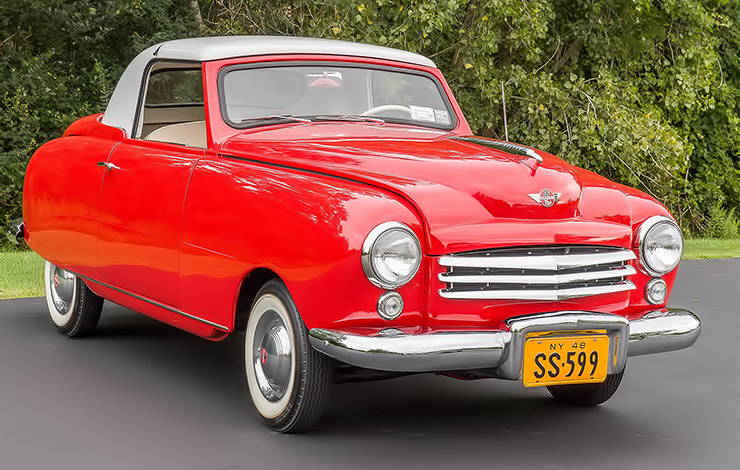 This endearing little convertible was a creation offered by two enterprising New Yorkers who formed the Playboy Motor Corporation in the years immediately following the end of World War II. At the time, Playboy was one of many small car companies going up against the major automakers for an entirely unproven market – the sub-$1,000 car.

The majority of these efforts featured tiny cars with small engines that were cheap to buy, run and maintain. Though sound reasoning, the economic reality of the time was that if a person or family couldn’t afford a car that cost more than $1,000, then it couldn’t afford one at all. The lack of an interested market, combined with a scarcity of materials, caused nearly all companies that attempted car production based on this theory to fail, many before even a single car had been sold. Perhaps the lone exception to the rule was the King Midget Company, the story of which can be found in the “Oddies But Goodies” archives.
– 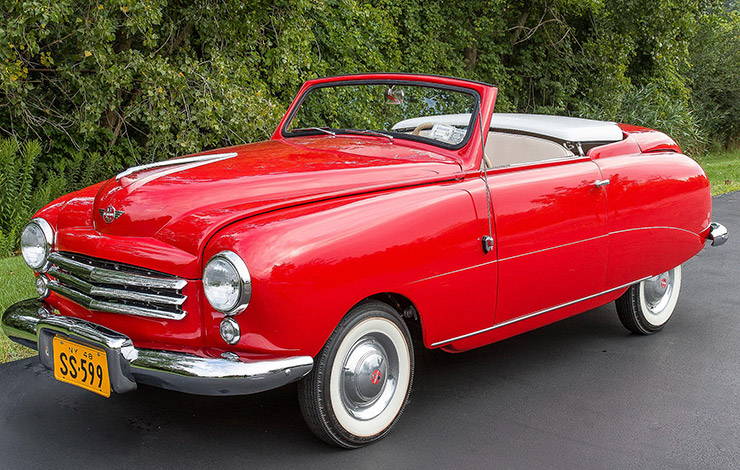 Louis Horowitz, Charles D. Thomas and Norman Richardson originally founded the Playboy Motor Corporation as the Midget Motor Car Company. Horowitz, a former Packard dealer, and Thomas, a onetime Pontiac engineer, came up with a very affordable lightweight convertible for fun motoring. It seated three, had a manually activated retractable metal top that stowed behind the seat and was powered by an inline four-cylinder engine. 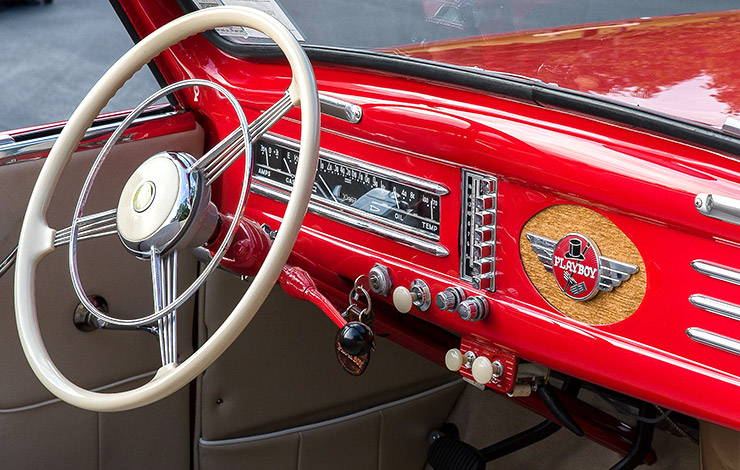 In May 1947 Playboy Motor Company started production of a pilot model with a unique all steel convertible top. At the car’s premier showing in Chicago in August 1947 the Playboy drew so many offers to buy the car that many spectators were begging for dealerships. In order to sell their cars and to raise cash the company sold over 700 dealerships around the country. 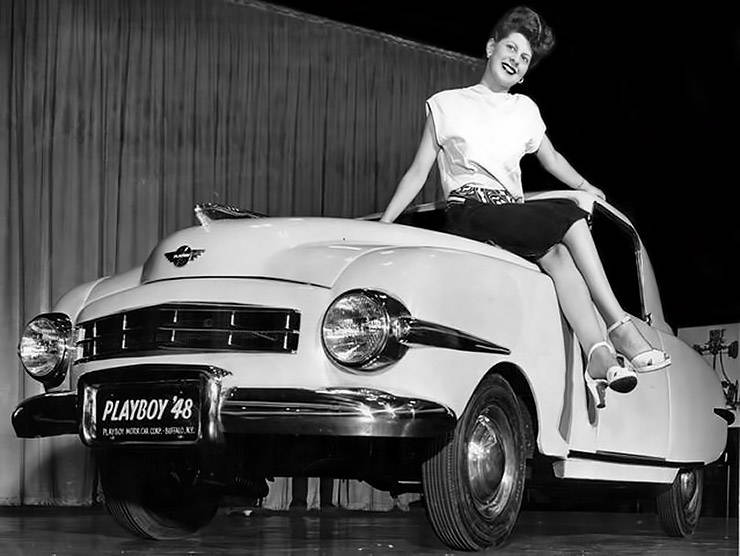 Playboy had a goal of producing 100,000 but because of the Tucker scandal of 1948 and their inability to sell shares of stock, but only 97 “dealer samples” were ever hand-built at the old Brunn body factory in Buffalo and later at Playboy’s factory in North Tonawanda, New York.


Its initial price of $985 must have made it very attractive to those who could afford a second car for leisure-time drives or household errands. In fact, its intended market was as a second car for the suburban housewife. 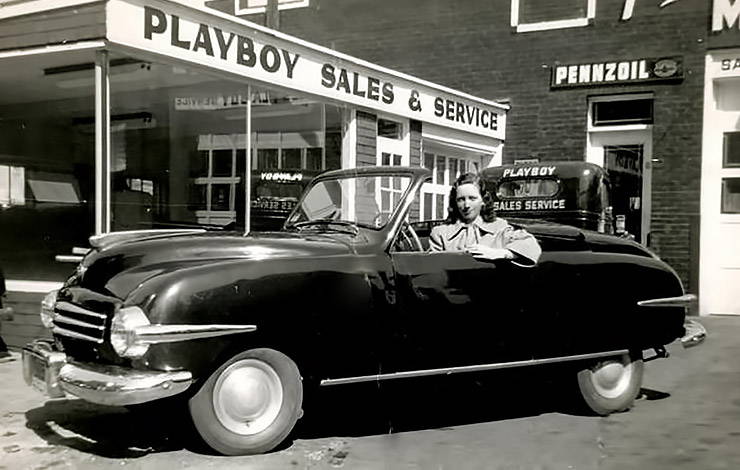 Weighing just a little over one ton, it was powered by Continental Fours of 40 hp, and later by Willys Fours of 72 hp linked to a three-speed manual gearbox. Later, overdrive was offered as an option. With a 90-inch wheelbase and 155-inch overall length, it was a cute little looker and it received widespread acclaim from both the news and automotive press, thanks to the company’s hired promotion agency. 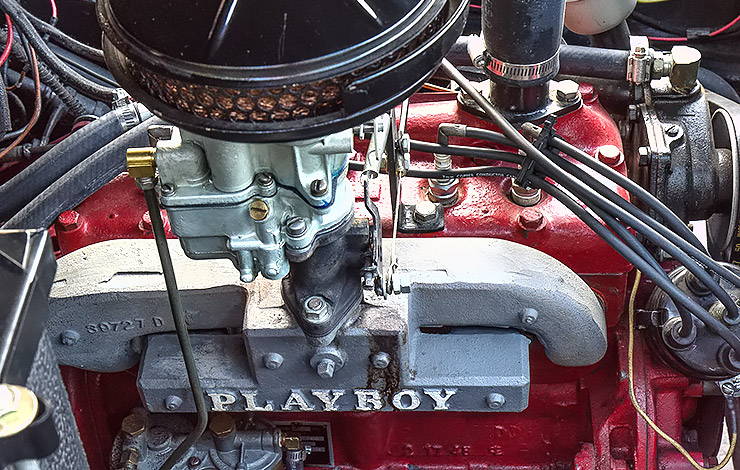 Much like the Tucker, the Playboy was financed by dealer franchise sales and stock offerings, which unfortunately arose at the same time that Preston Tucker was under investigation by the Securities Exchange Commission. From there, the company’s assets were sold off to a holding company that was run by a group of Chinese Nationalists. Enter another failed stock offering and Connecticut businessman Alvin Trumbull who picked up the pieces. In 1952, Trumbull attempted to revive the Playboy, with Preston Tucker’s aid – without success. During those final years, the incomplete dies for stamping the Playboy’s body panels that would have made mass production possible were hanging in limbo because no one came forward with the money to put everything into production. They were finally destroyed in 1959. After shopping the Playboy around to various companies in a fiberglass-bodied sports roadster form, Trumbull finally gave in to the inevitable and sold off his remaining Playboy inventory to a collector, in 1965.

There are believed to be fewer than 50 Playboys in existence today.