They rooted around in the back of the garage, where Tony still had the 496 motor, and they set to mocking it up. The setup looked like it would fit. So Radar commenced to cutting tubing. As to the motor itself, they knocked the compression of the 496 down to 9:1, courtesy of some Ross aluminum pistons, and kept it from going hungry with a pair of 450 cfm 4160 units. Jamming atmosphere and endangered species into all that are a pair of Borg-Warner 64mm turbos.
– 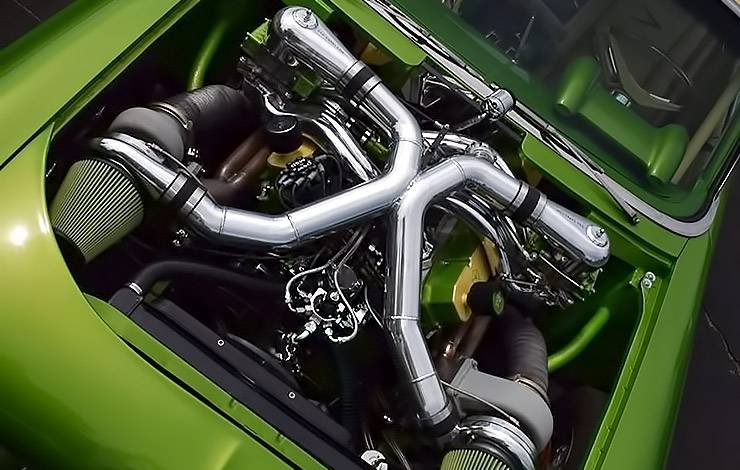 By the time they got done tuning, those little windmills were jamming something like 10 more psi into the intake than the troposphere would have provided. On the back end of that process, Radar fabbed up the exhaust out of Spintech 4.5-inch oval tubing, and it goes out the side. Other than inspection, they didn’t do anything to the existing Eagle crank, Eagle rods or Indy heads, which made Tony’s accountant collapse in relief, right to the bottom of his hot tub in Boca.

The torque numbers sound almost agricultural: Cummins, eat your heart out, No-Page has 900 ft.-lbs. And it probably explains why the front end bears more than a passing resemblance to a Massey- Ferguson combine harvester, at least when the air bags are dropped to their lowest setting, which puts the bumper one American inch off the topsoil.
– 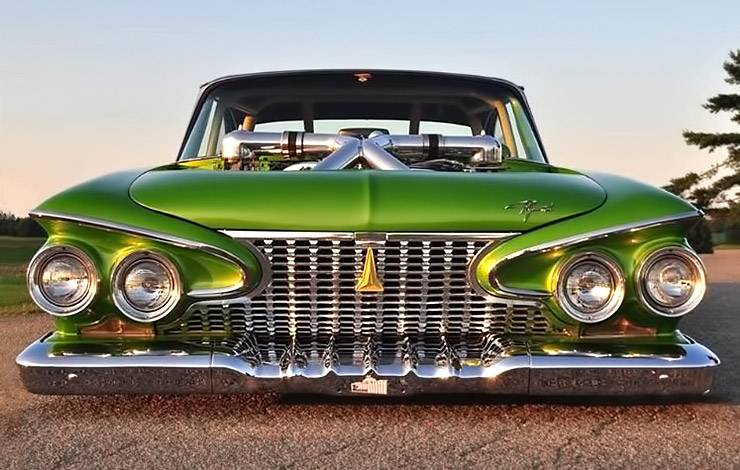 But to keep passing farmers from trying to buy it off lease, No-Page Tony went to Markymark Detoffol for a brutally Viperesque paint job. Tony points out that because it’s a stock color, Snake Skin Green, which was used on the 2010 Viper, he can walk into his local auto parts store for touch up paint. And boy does it pop when out in the sun. As to the rest of it, Radar was as spooled up for that as his turbos, and he began jamming things into the Bel. He backhanded in an aluminum radiator with electric fans. He dropkicked in a PTC 9.5-inch converter. He pulled a fading away hook shot with a 727 from Dave’s Automatic in Duluth, Minnesota. Then he slingshotted in a custom chrome-moly driveshaft, and used a trebuchet to launch in a 9-inch 35-spline unit with 4.10s and a Richmond spool. He also hacky-sacked in some Budnik Diamond Light wheels and some Hoosier Quick-times.


As to the great indoors, No-Page Tony went to Tea’s Design for the seats, with the most recent round of upholstery done by a guy named Bill Ion. Note the Virgil Exner “Forward Look” emblems. The gauges are Autometer Phantom and the shifter and cup holders are Pentastarshaped. But maybe our favorite part of the interior is the ancient, really-hard-to-find, NOS “Aero-wheel”: it’s a clear-and-glitter steering wheel that screams “1961.” 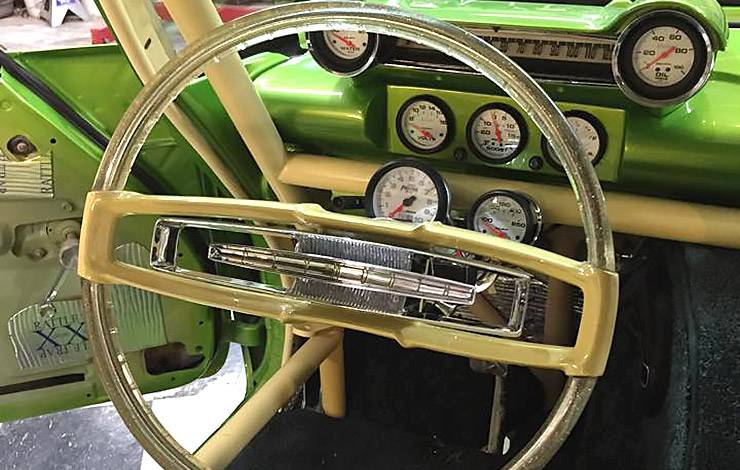 We applaud Tony for many different reasons. Not only did he stay determined to create this badass Belvedere even though it took him almost 20 years to complete, but he also drives the car on a regular basis. I take my hat off to No-Page Tony.
Now check out the video below.