It’s not everyday that you come across a fully tricked-out delivery truck that’s been equipped to hold enough heavy artillery to make any second amendment activist or post-apocalyptic zombie survivor wet his pants. Though it looks battle ready, the initial idea behind this vehicle started out very much unlike what you see on these pages. 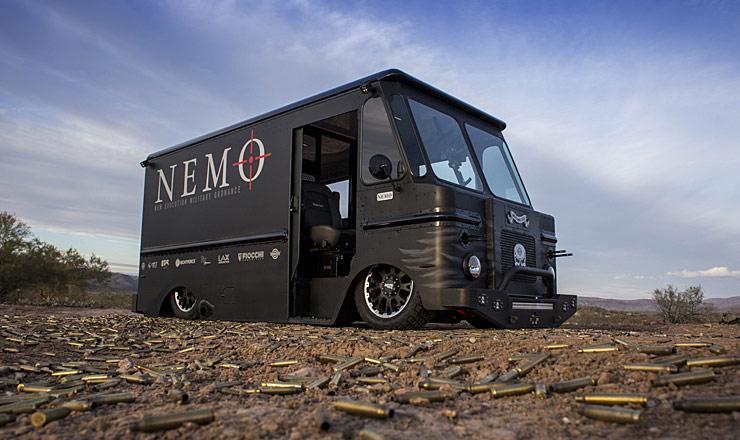 It was first conceived when Clint Walker noticed how frequent and troublesome trips to the firing range had become. Clint is the president of NEMO Arms, a leading manufacturer of precision long range AR-type rifles, including the world’s first .300 Win Mag AR and US Military Tier ONE operations. He quickly came to the realization that making 45-minute trips to the range to test new products would be easier with a proper vehicle to haul them in and all of the tools and supplies he would need.

At first, Clint decided it was time to step things up by purchasing a mail-type truck that could be modified to hold his company’s product. Since he wasn’t too familiar with these types of vehicles, he gave his old friend Jeff Davy of Devious Customs a ring to look at options for his new project. From there, Jeff searched around and found this 1966 Grumman Kurbmaster that was very local to his Riverside, California-based shop. After a short trip to go check it out, he ended up taking it for a reasonable offer and hauling it away in order to get the ball rolling.
– With missing floor sections and a transplanted Cummins-powered drivetrain, this truck was already a work in progress that was in need of some love.

Since Clint use to write for a few automotive magazines in the past, he’d become familiar with the lowered truck scene. So, instead of just fixing the newly acquired delivery truck, he decided that he wanted to let Jeff have his fun with it and fully deck it out. From there, Jeff and his crew, including Jeff Johnson and Nathanial Dray, started the disassembly of this sizable beast. First thing on the list of modifications was to plant the ride flat on the pavement. Like most vehicles, this truck and its chassis were never designed to sit shockingly low. To handle this task, the Devious crew dropped the frame from under the body and created a new one out of 2 x 8-inch steel tubing and a front clip salvaged from a 1989 Chevy Suburban. On the front, a new set of control arms was fabricated and a pair of Western Chassis dropped spindles was attached.


Then a pair of 3,200-pound ContiTech airbags was mounted, while the sway bar was adapted to the adjustable suspension. On the rear, a parallel 4-link and Watts link keep the rear end from a Dodge 2500 truck in place. A rear cantilever linkage was made to lift the truck up with the use of a matching set of airbags. Helping to keep this truck from tipping over on the road is a torsion-style sway bar made to fit the rear.

Learn more and watch video on the NEXT PAGE