The designing process was assisted by Ferruccio’s two sons: one an electronics engineer and racing driver, the other a mechanical engineer. He also managed to pull together a lot of big sponsors: Pirelli (tires), Brembo (brakes), Bosch (electronics) and Momo (airbags). However, the biggest sponsorship came from a different field, literally — PMI, one of the largest tractor makers in Italy, which contributed its assembly line for the planned production run of 20 cars per year.
– 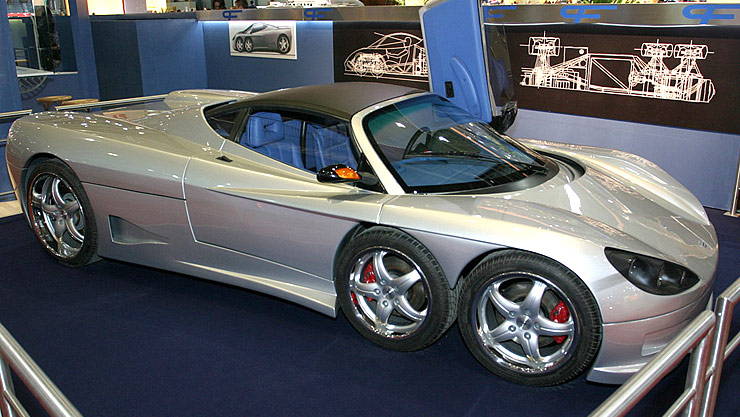 The first prototype was introduced at the Geneva auto show in 2005, shocking the automotive world almost as much as the Tyrrell did in its time. The power plant is an Audi-sourced 4.2-liter V8 that has been tuned to 440 hp and coupled with a six-speed manual gearbox. The chassis is tubular steel, while the body is made of a combination of carbon and fiberglass, with a retractable plastic hardtop. Aided by a curb weight of just 2,535 pounds, the C6W promises to hit 62 mph in less than 4 seconds and climb to a top speed of more than 186 mph. Customization can also include a V12 engine with over 900 HP.

Six and the City
Sitting low and snug in the passenger seat, you can’t help but notice strange stares everywhere you go. These are not your typical “that lucky bastard” glances most exotic-car owners are used to, but a double-take “I need new glasses” kind of stare.
– 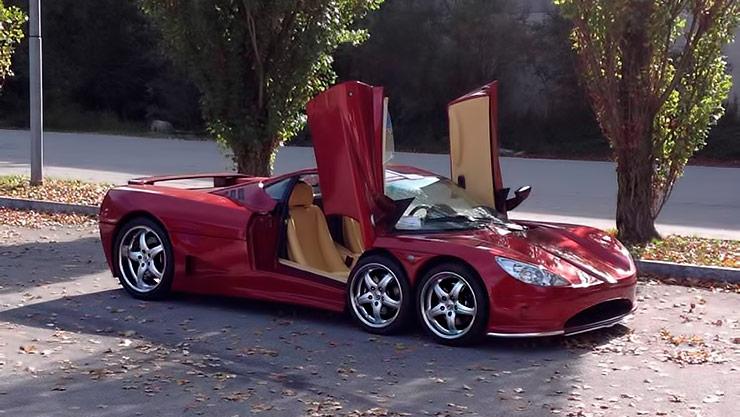 It’s hard to sympathize with that visual shock from inside the car, though, not only because it feels very ordinary, but also because the cockpit is extremely unattractive. The lines are too simplistic; the dials look like something from the Starship Enterprise and that light blue color scheme is, well, plain awful.

Naturally, you expect a four-wheel unassisted steering system to be overly heavy, but the C6W’s steering is relatively light and has very quick responses. Ferruccio says they, too, were surprised and continues with a fiery speech about the advantages of the car’s unorthodox mechanics: “Every 15-inch front wheel weighs half as much as the rear 20-inch wheels. Also, because there’s so much rubber on the road, there’s more grip, especially on imperfect roads. It also increases braking capabilities, even before considering its six disc brakes, and aids passive safety — less aquaplaning in wet conditions and enhanced stability in case of a front wheel puncture.” 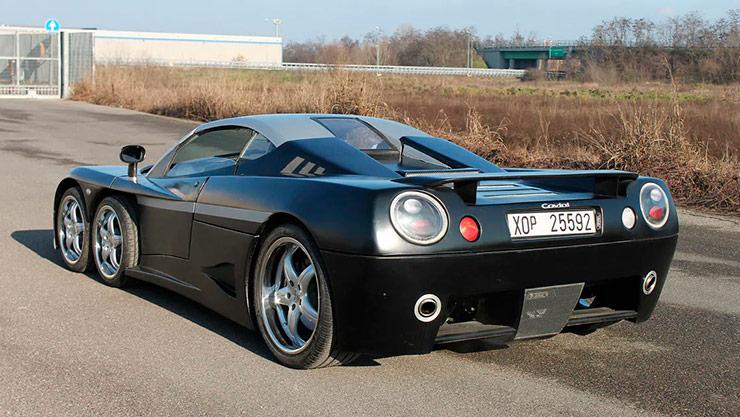 It sounds too good to be overlooked. In theory, anyway.

In Practice
On the road the six-armed monster feels very tame and familiar. Besides the tiny, useless side mirrors and the notchy gear change, all the controls are very easy to use and the ride really is very well sorted. The only extraordinary sensation comes from the fact that the nearest wheels are, indeed, very near — almost at driver’s knee line. This results in ultra-sharp turn-in and a sense that the car is pivoting around you. 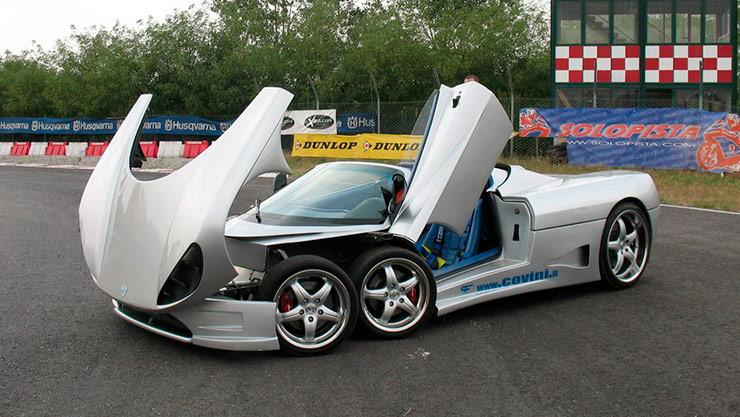 Despite all its tiny flaws, this car really works great. It’s accurate, tight and very composed in the bends. The steering provides superb feedback and there’s lots of front-end grip. You can even get it going sideways with a very progressive transition from grip to oversteer. And there’s nothing on earth that looks like this machine in a slide. Where else does one see four wheels in opposite lock?

In other words, it’s got all the essentials of a good sports car.

Ferruccio Covini, like the designers of the Tyrrell P34 and other visionaries before him, has shown us that thinking outside the box can lead to creative solutions. And he has proved once more that there’s only a fine line between insanity and ingenuity.