How to Build a FWD Car Hauler.

We’re not advocating trailered hot rods and customs here. There are plenty of other reasons a relatively inexpensive vehicle transporter would be a handy piece of equipment to have around. You might need a way to get an inoperable project car from an isolated pasture to your garage. During construction you might have to take it to one shop or another to get work done. You may have a surplus vehicle to take to a distant swap meet. And, yes, once it’s finished you might choose to do the heavy clean-up work ahead of time at home and transport it to a show.
– 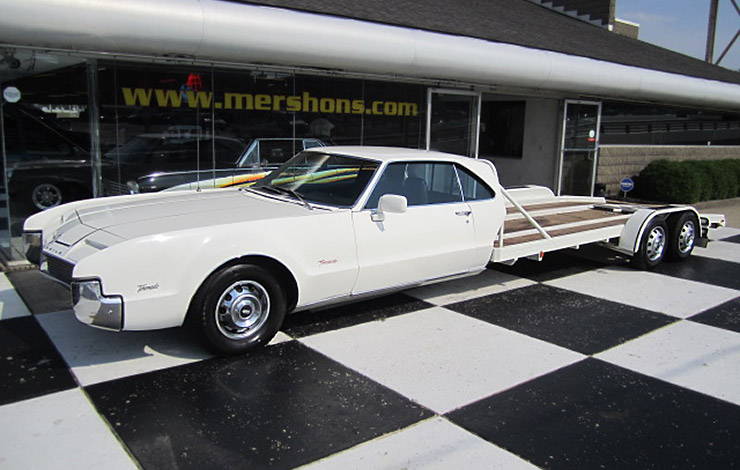 Whatever reason there may be, when we saw this Olds Toronado-based rig, we were anxious to find out how it was built and how well it worked, and to share that information with you.

Don Edwards of Beatrice, Nebraska, uses this ’77 in his business, Custom Auto Sales. Buying and selling used and vintage autos often involves transporting them from one place to another.
–
The principle is simple: Early Oldsmobile Toronados from 1966 until they were downsized in 1979 (and Cadillac Eldorados from 1967 through 1978) are heavy luxury cars powered by large, torquey V-8 engines and featuring front-wheel drive. Being pulled from the front means you can add anything onto the rear end, like a low trailer bed, without hasseling the drivetrain.
– 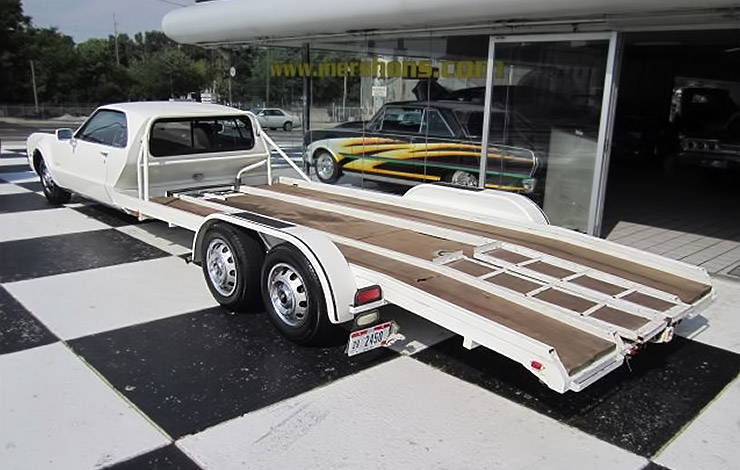 Placed as nearly as possible under the center of gravity of the hauled vehicle, the rear axles will bear almost all of the load without putting too much of a strain on the joint where the bed attaches to the car frame. 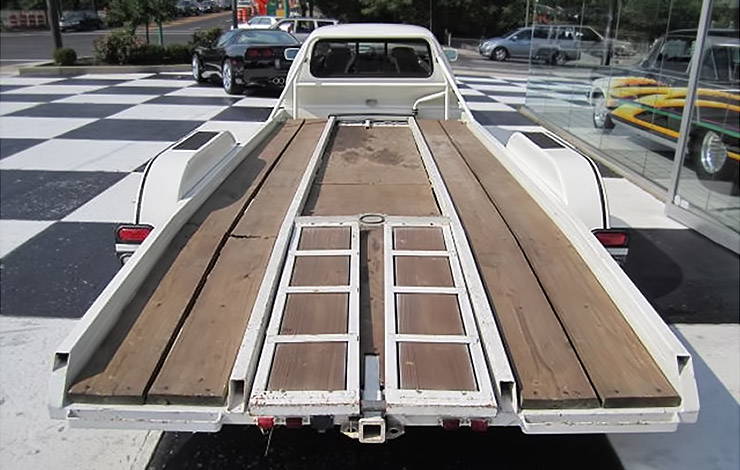 In constructing this hauler, Mark Setzer (Setzer’s Manufacturing) used Tor-Flex axles, which are designed for trailer applications. Each axle consists of two independent shafts mounted in rubber inside a single tubular housing with trailing arms and spindles attached to the outer ends. Each wheel moves independently. As load is added, the shafts twist, compressing the rubber and gradually stiffening the suspension as the weight or force increases.


Two Tor-Flex axles, each with 3500 lbs capacity are mounted in tandem. The bed itself weighs approximately 1,800 pounds, which leaves a remaining payload capacity of 5,200 pounds. Dico electric brakes are mounted on all four wheels. The Keystone RV wheels mount P235/75R15 BFG radials. 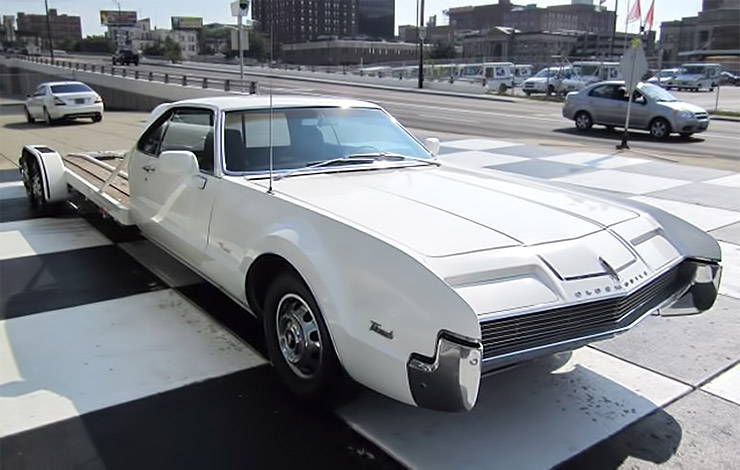 The bed framework is of 3/16-inch wall 2×5-inch rectangular steel tubing. Two full-length runners tie into the Toro frame rails. Additional longitudinal runners form the outside perimeter of the bed. The runners are tied together by crossmembers of the same 2×5 tubing, and 14 gauge diamond plate steel forms the deck. Loading ramps fit into a channel across the back, adjusting to any tread width, and store in racks underneath.

The Olds frame was cut off at about the top of the rear axle arch. The bed frame tubing runs inside and even with the top of the Olds frame rails and overlaps some 20 inches. A second length of 2×5 tubing goes below the first, running even with the bottom of the Olds rails. All are solidly welded together with steel plate gussets at stress points.

A crossmember is also welded in to tie together the Olds frame kick-ups. To cover the joints and finish off the gap between the cab and bed, Setzer welded together a locking tool box, which also encases a winch to assist in loading inoperable vehicles.


The Toronado body was cut off behind the doors. A new rear wall constructed from a Chevrolet pickup panel hides a Chevy pickup gas tank with a Kawasaki filler door. A Hillman Minx provided the rear window frame, which an accessory sliding window fills to perfection. The original Toronado moon roof was left intact. John Cerveny upholstered the interior in fawn velour. The exterior finish is Oldsmobile white with maroon lettering. 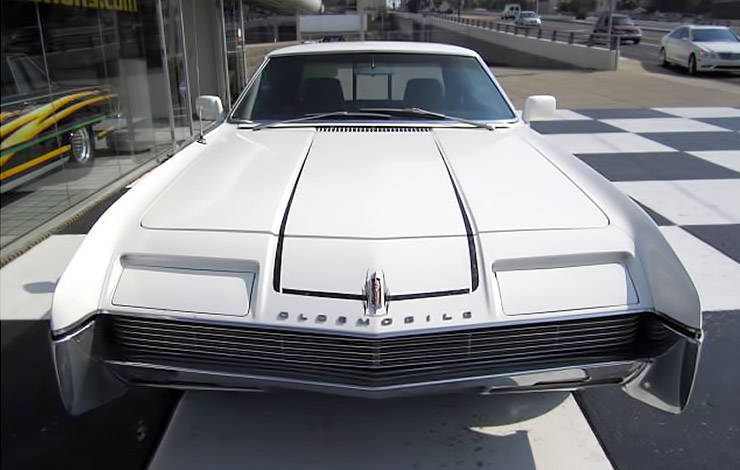 The 403-inch V-8 and TurboHydramatic transaxle has been ample for all hauling tasks so far. Although Don normally transports only one vehicle at a time, the Toro is capable of carrying one on the bed and towing a second on a dolly behind. 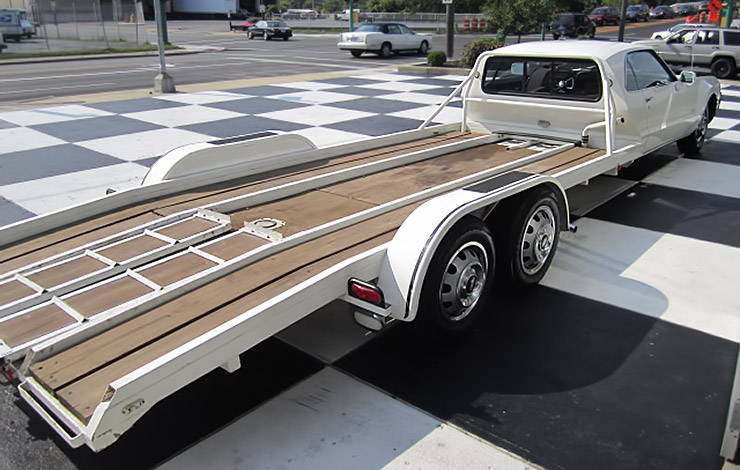