The 1973 Plymouth ’Cuda was never optioned with a Hemi, which was due to the trifecta of performance-crippling gas shortages, huge insurance rates, and chokehold-type fuel economy standards.

The factory chose death rather than castration, and while some of the crazy color schemes and graphics remained, the luster was gone. Somewhat now an orphan, the body design made famous by Swede Savage and Dan Gurney was nearing its end. Ten years to the day since its introduction as an A-body, the last ’Cuda rolled off the production lines on April 1, 1974. The party was over.

Since then, many of us have struggled with the major dilemma of owning a car that was made exactly the way we want. If you want OEM, you have very limited options. You might find one fairly close to what you want, but it likely will cost a ton and is never truly right. Moreover, technology has changed for the better since those days. For custom car builder Telly Violetto of Violetto Autoworks in Montello, Wisconsin, the choice was clear. He wanted it all on his handbuilt ’73 ’Cuda, which he has nicknamed “Blackend.”
– Violetto is one of those guys who combines classic styling with modern creature comforts in a way the old behemoths never did, all while making it look worthy enough to roll up to a red carpet. The car hosts many custom little touches that can’t be readily pointed out. People don’t notice the custom front bumper made from a combination of no less than three ’69 Camaro bumpers (hey, what are junkyards for, anyhow?) to get it tucked in just right. The rear bumper is also tucked in closer, the side markers have been shaved, and the firewall is smoothed out. What most people do notice is the bodywork – four base coats of BASF Diamont Black paint and five glossy coats of clear. Making black-on-black work is probably where the majority of the 1,300 hours of build time went.

Lift that hood, and yeah, it’s gotta Hemi all right – a modern 6.1L purloined from a Dodge Charger with ultra-low miles. Lightly breathed on, the OEM package sports its 425hp/420 lbs-ft of torque helped with a set of tti headers, a three-inch mandrel-bent exhaust and a DiabloSport tune. This is backed with a four-speed Allison 545RFE automatic transmission borrowed from a truck, and the ’Cuda has the everyday characteristics of a daily driver with the power of a weekend ground pounder. 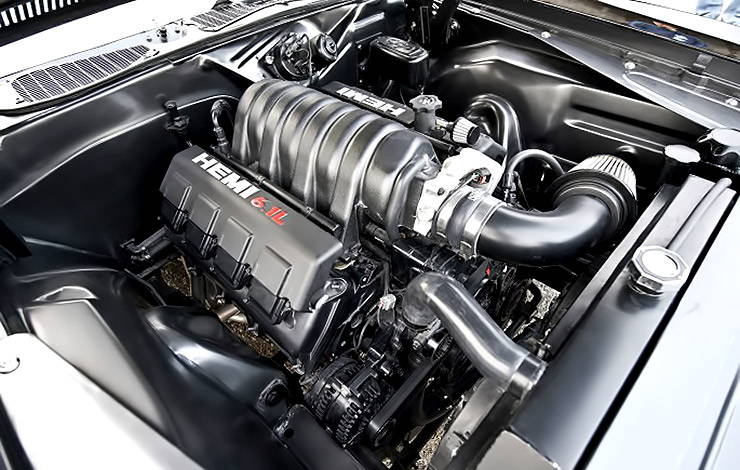 The front end gains traction from a RMS AlterKtion suspension kit combined with an Air Ride Technologies airbag system, while the rear is helped by an Airbar four-link provided by Air Ride and its matching airbags connected to a Ford 9-inch rearend carrying 3.55 gears and Moser axles.


Custom-cut-and-shaped frame connectors Violetto fabbed out of 1½- by 3-inch rectangular tube lessen the body flex, and the final touch was Budnik wheels measuring 18×8-inch in the front and a massive 19×10-inch in the rear, wrapped in NT555 Nitto tires (235/40/18 front, 275/35/19 rear), with four Wilwood 12.19-inch drilled and slotted rotors and forged Dynalite calipers stopping it all. 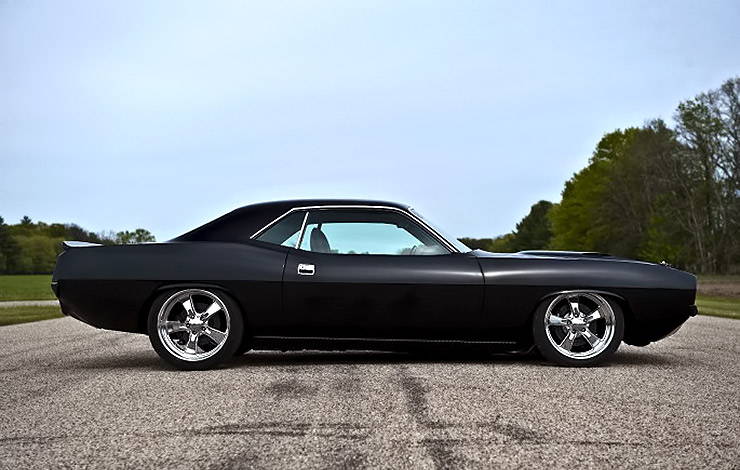 Inside, Jim’s Auto Upholstery in Madison, Wisconsin, provided the custom Ultraleather two-tone look, while Violetto added the Nordskog digital gauges to keep an eye on all the vitals. The interior has been fully quashed by Dynomat’s Xtreme Fatmat sound deadener. It’s not just anybody who can prep and chef a fish this well. Telly’s goal when building this car was to create a car that would show off his talents, and his handiwork can be seen all over it. Fixed this hot and spiced to perfection as the final ’Cudas arrived for American consumption, this one lives up every superlative. It is indeed … Blackend! 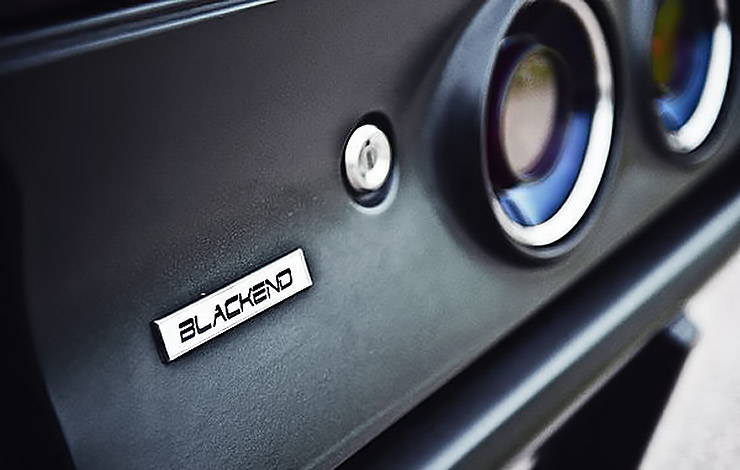 –
Have you ever seen a more high-end, every-trick-in-the book, custom E-Body show car? This ‘Cuda “Striker” isn’t some ordinary show car though. Check it out.
– 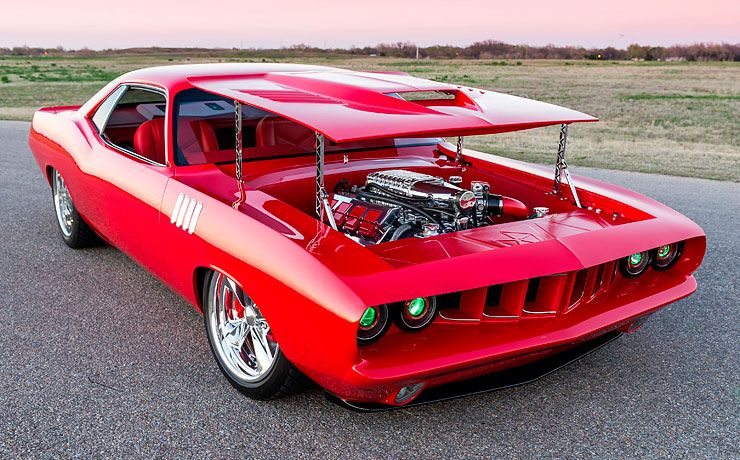