The little Trabant 601, a car which was popular in the countries of the former Eastern bloc with respectable 3.7 million produced pieces in the period from 1957 to 1991, can still be seen on the roads in Germany and Eastern Europe, but less frequently.

Of course it’s been a long time since it served as a primary vehicle. The owners keep it because of nostalgia and love for the car with which they passed their first kilometers.The original model was produced from alternative materials obtained by recycling, the engines had little power but it was enough for the light body and the single purpose – to be as cheap as possible. Today, Trabant is the object of worship among a group of people who do not save their effort and time to make their favorite car as they wanted it to look like when they bought it, but some of them went a step further.


One of them is a Polish enthusiast who bought the car 14 years ago. Even then he replaced the original two-stroke engine with a 1.1 liter petrol engine (built in the latest version of the Trabant, taken from WV Polo). Shortly after that, in the Trabant was built an engine of 1.3 liters, later an engine of 1.8 liters and in the end the 2.0-liter engine taken from the Golf GTI. 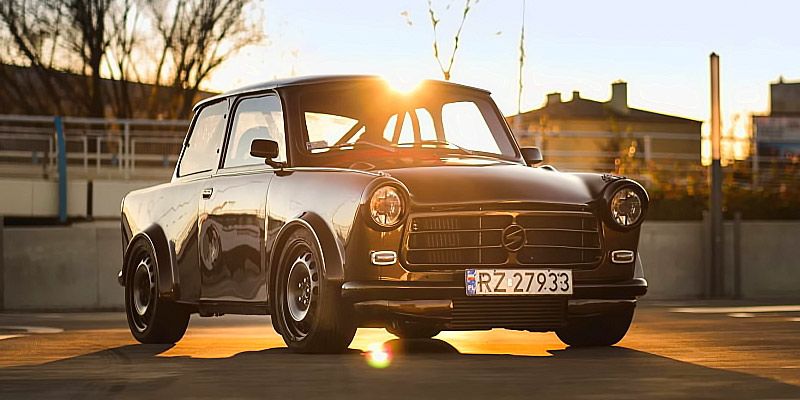 In the meantime, its owner destroyed his Audi TT in a car accident and decided to use the components of the car to and to put them in the Trabant.

The owner wasn’t thinking only about how to achieve greater speed, but also how to stop this little rocket, so he embedded the brakes of the Audi TT with a diameter of 312 mm in the front and 256 mm in the back. What is interesting is that he managed to fully incorporate the functional ABS and EPS systems in the Trabant.