When’s the last time you saw a car on the road with both a parachute and a license plate? 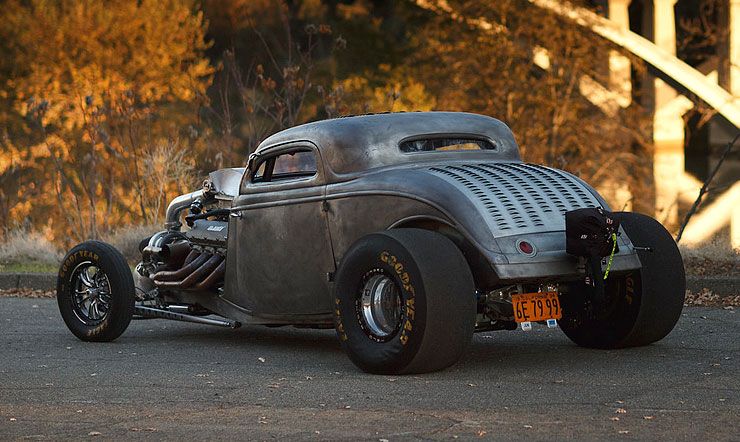 Is it a menacing street rod or a dragster with no trailer in sight? Let’s see: no radiator, no water pump, a tall-deck big-block, and twin 88mm turbos for a grille; come on – there’s no way this car can be driven on the street. But, builder Ed Umland swears owner Rich Feicheer drives this 1934 Ford on a regular basis. Seriously? Seriously.

Everyone’s definition of a “daily driver” is different. Rich’s definition is just on the outer threshold. Fiechter is a drag racer from way back, having run Super Compand Super Gas cars in NHRA’s Division 7, so he enjoys blasting through the timing lights as much as cruising the boulevard. When he got the idea to build a 1934, he wanted a car that could do both comfortably. Fiechter approached Umland with the idea and they sourced an abandoned project from one of Umland’s other customers to start the build. Fiechter originally wanted the 1934 to easily clock 9-sec. quarter-mile times. The more Fiechter and Umland talked about the project, the faster Fiechter wanted the car to go, but still remain streetable. Eventually Fiechter decided he wanted to run in the mid-7s in the A/Gas class at the track. Those discussions and the problems and solutions they created dictated the kind of car that Fiechter would drive out of the shop when it was all done.
– The blower concept was scrapped in favor of a big-block turbo engine. Using turbos allows for a low-compression motor that can run on pump gas when just putting around town at low rpm. At those speeds the turbos practically freewheel, giving the set up a very streetable driving characteristic. At the track with the octane, boost and rpm’s turned up, the setup can deliver the power needed to meet the ¼-mile time requirement. Motor Machine built a 598 Big-Block Chevy running 9.5:1 compression with Big Chief CNC-ported heads using some very large valves and spec’d a pair of 88-mm Comp Turbos. The traditional hot-rod grille shell was scrapped so that the turbos could be positioned at the very front of the car to take advantage of the uninterrupted airflow.

Once the turbos and motor were in place Umland set about fabricating up the plumbing needed to feed the massive mill. Headers, waste tubes, intake runners, intercooler and plenum soon adorned the front of the 1934. Keeping it somewhat traditional looking, a Moon tank caps off the front end and serves to feed ice water to the intercooler for high HP runs. All this hardware up front meant that the radiator had to go to the back. Fed by an electric water pump and hidden under a louvered trunk lid, the aluminum unit provides more than enough cooling for extended street cruising or fast passes at the strip. 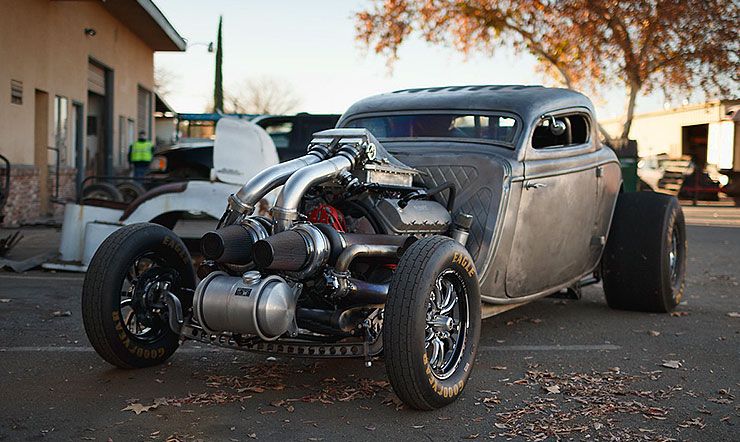 The mechanical bits aren’t Ford, they’re Ed’s invention, with all sorts of moving levers and pivots that apparently open the doors and roll down the windows. Of course the dimple died brace that now trims out the door was custom made, and that louvered roof filler is pure hot rod too.

There’s a full set of gauges inside, plus a trick bead-rolled dash: things you wouldn’t usually find in a drag car. 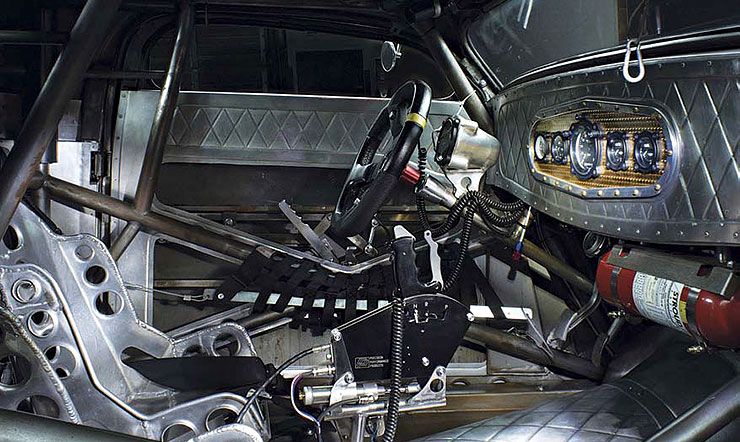 The car was dynoed at 1240 bhp at the rear wheels running 14 lb. Of boost on pump gas. Umland estimates the current setup is good for approximately 2500 bhp at a jaw-dropping 30 pounds of boost.
In case you are wondering the best time at the quarter-mile was 8.3 seconds at 167 mph. That was accomplished with the boost turned all the way down.