The Dodge Viper, Hellcat Challenger, Hellcat Charger and the rest of the many Hemi-powered vehicles in the brand’s lineup makes it the leading American brand in terms of high performance vehicles and in their newest advertisement, the company shows off all of these powerful vehicles as they storm through the streets of Detroit.

While the Dodge Viper and the Hellcat Challenger and Charger get the vast majority of marketing attention these days within the brand, Dodge offers one of the most expansive lineups of high performance V8 vehicles in the US market. After the Hellcat Challenger/Charger at 707 horsepower and the Dodge Viper at 645 horsepower, the Challenger has three trimlines with the 485hp 6.4L Hemi and two trimlines with the 370hp 5.7L Hemi while the Charger has a pair of 485 models and a pair of 370hp models. There is also the Dodge Durango, which is powered by a 360 horsepower version of the 5.7L Hemi.


Some automakers might offer one or two competitors for the high performance Dodge models, but no brand can go toe to toe with all of the go-fast Dodge cars and SUVs with a real chance of winning. With that in mind, the Chrysler Group is marketing Dodge as more of a high performance brand and with the latest 30-second spot, the company goes so far as to come up with a name for a group of high performance products – a Rumble of Dodges. 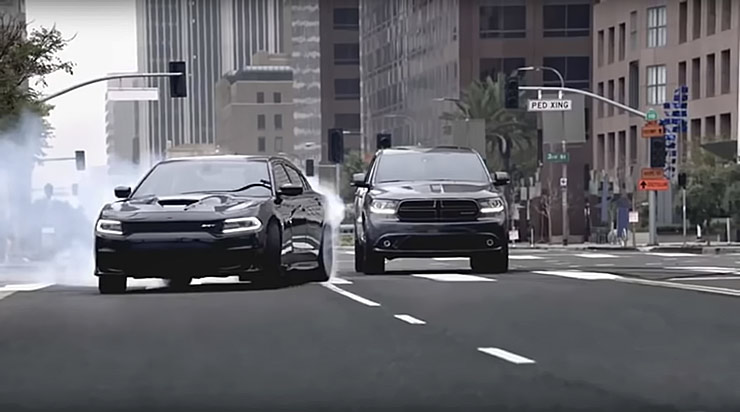 Rumble of Dodges Ad
The newest commercial for the Dodge brand once again features the modern likeness of Horace and John Dodge – this time using a pair of new Dodge Viper ACRs and an old timey loudspeaker setup to summon their pack. The ad explains that different packs of animals have different names – such as a pack of wolves or a pride of lions – but in the case the high performance Dodge vehicles rushing to meet up with the brothers and their Vipers – this isn’t a pack. The commercial declares that a group of Dodge vehicles running together are to be known as a rumble and based on the fact that the scores of Hemi and V10-powered Dodge products all have a lovely rumble to them, that seems like a very fitting name.

Not surprisingly, the Viper, the Hellcat Challenger and the Hellcat Charger are the most heavily featured vehicles in this new Dodge commercial, but we also see a large group of Challenger and Charger models in other trimlines, as well as the Dodge Durango. The video is chock full of quick shots of these vehicles sliding around corners with the tires smoking and racing through the streets of what appears to me to be Detroit.

In the end, we see the huge rumble of Dodges collect around the Dodge brothers atop a parking garage and in that one shot are some of the most powerful American production vehicles ever offered for road use.