Southern California police are searching for a motorcyclist who was involved in an alleged road rage incident that injured one person.

The incident happened on State Road 14 near Newhall Avenue in Santa Clarita, California, about 30 miles north of Los Angeles, and prompted a 30-minute closure in the area.
–
Chris Traber, the 47-year-old man who shot the video, says the car was in the carpool lane before swerving to the right to enter the fast lane, almost hitting the motorcyclist. After that the motorcyclist appears to try to kick the sedan on the right.


In response, the sedan veers to the left and briefly collides with the motorcyclist. The motorcyclist somehow stays upright, while the car loses control and hits the concrete highway divider wall with a fiery impact.
– 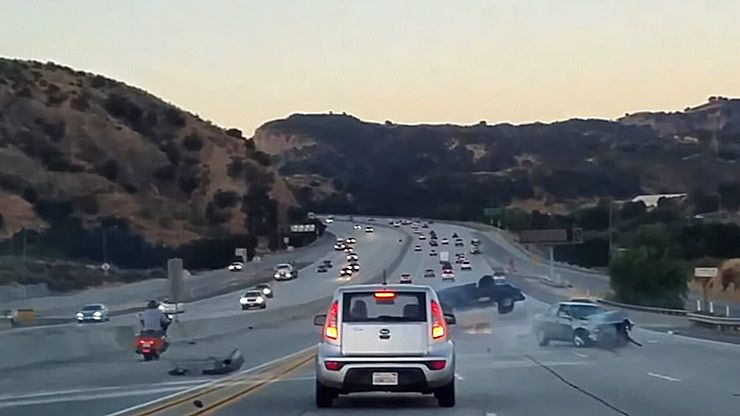 The momentum from the crash sent the sedan toward the middle lane of the highway, where it collided with a white Cadillac Escalade EXT pickup truck, causing the truck to overturn.

“The driver of the truck suffered “moderate” injuries and was taken to a local hospital for treatment. The driver of the sedan stayed on the scene and was not issued a citation” CHP public information officer Joshua Greengard said.

After the collision, the motorcyclist continued driving southbound and did not stop Greengard said, adding that police are actively following leads that may reveal his or her identity.