Baddest Chevy C10 in the world?

The Chevy C10 pickup has always had a strong following, but lately it seems as though the model is becoming a very popular choice for all-out pro touring builds. The most extreme of the bunch could well be Bob Bertelsen’s Orange Rush. This truck is top notch and can easily win awards at a car show, then lay down the rubber on the track. Though Bob Bertelsen has been on a hot streak with a few car builds, he still remains a truck guy at heart. While having dinner one evening with friend Pascual Marquez of Marquez Designs, Bob decided to tackle a C-10 truck build. Fortunately, Pascual knew of a rust-free project truck that would be perfect, and soon enough it was sitting in Bob’s driveway. After several weeks of bouncing ideas back and fourth, Bob settled on the concept of making it a cutting-edge autocross-style truck.
– Once home, Bob started building and welding in all of the cross members and suspension brackets. Bob placed the cab on the new rigid frame and fabricated the body mounts.

Next, neighbor Tom McKenzie helped Bob build the full roll cage that ties into the bed and custom frame. Bob bought a hydraulic bender so that he and Tom could quickly fab the roll cage. With the roll cage secure, it was on to mounting the body panels. First up was the tilt front end. Bob started with a US Body tilt front end, and then used his new bender to shape some 1-inch square tubing to fashion supports for it. With a lot of CAD design, he was able to figure out where the hinges needed to be in order for the front end to tilt with a ½-inch aluminum splitter under the front bumper. 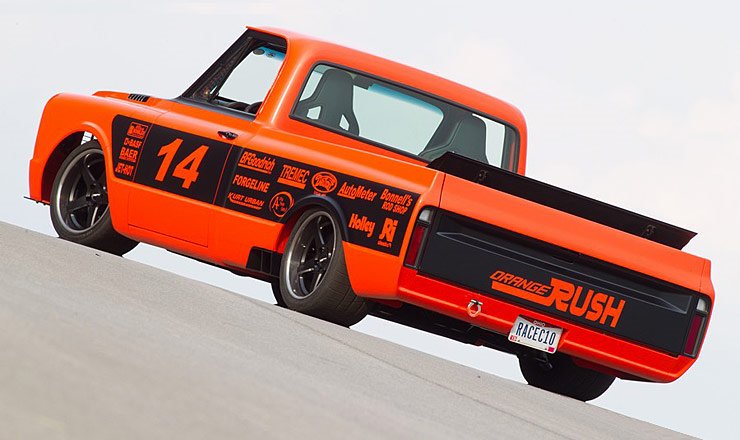 Once this was set up, he started modifying the bumper section of the fiberglass front end for the lower opening.

The next modification was the heat extractors on the hood, which was a tricky issue. He made cuts in the hood and used wood to fiberglass the pockets. Then he cut out the center grille section and replaced it with a grille made in CAD and cut with a water jet.

Read More and Watch Video on the NEXT PAGE