The year was 1960; the car was Challenger; the driver was Mickey Thompson, and the moment was the record-breaking peak in the history of the American speedtrack. Mickey Thompson was one of racing’s greatest innovators, the daredevil driver who created a revolution in the production of the racing car. He was a genius/madman engineer that tested the boundaries of automotive innovation and logic.
–
He had built the first-ever dragster in the early 50′s, and he was one of the first to build a twin-engined dragster which was successful both in drag racing and at setting a record at Bonneville.

In his long pedigree of motorsports projects, one stands apart from the others, a four-engined Pontiac Streamliner. His newest challenge in 1959, was to break John Cobb’s long-standing Bonneville record of 394.19 MPH as well as to break the 400 MPH barrier.
– 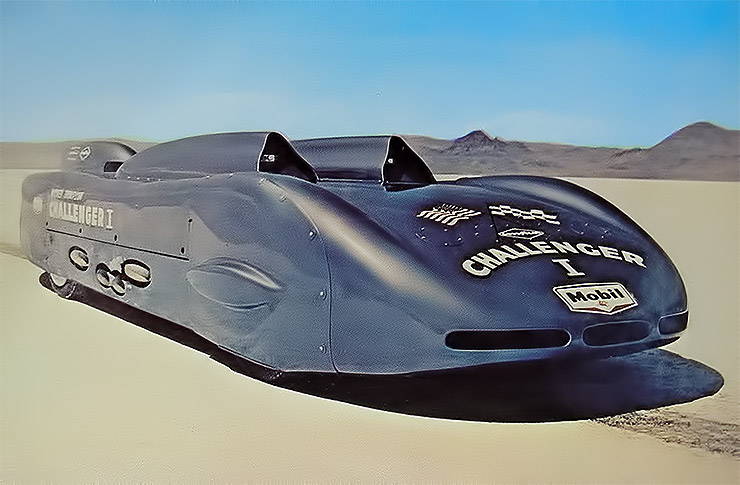 In order to break this record in early 1959, Mickey began construction of his Streamliner which he nicknamed Challenger I. The first thing that had to be done when constructing Challenger was finding tires that would be capable of handling speeds over 400 MPH. This ended up being much harder than he had originally thought!  Most of the major tire manufacturers had no interest in sponsoring Mickey or producing tires for his Bonneville record attempt.

However, when Mickey went to the Goodyear Tire company, the executives listened to his proposal, figured it would be a great marketing deal and sponsor him and make his tires when they said “Ok, we’ll build them.”

Finding tires wasn’t the last challenge for building he had to face while building Challenger. The next challenge was finding the right engines that would be capable enough to make enough power to reach 400 MPH on land. 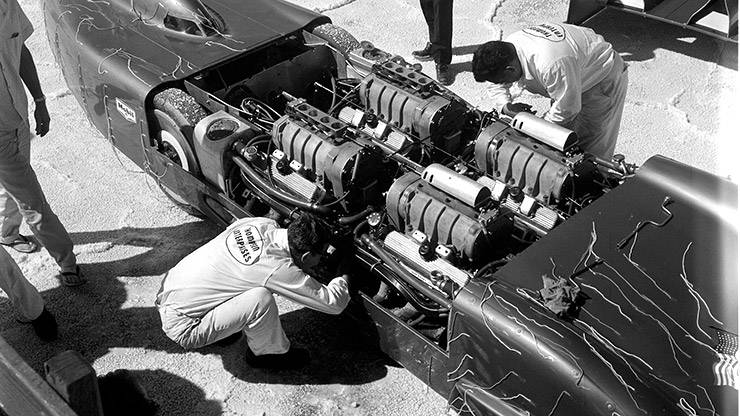 The body was next part of the build that had to be done. To ensure maximum aerodynamics the body had to be as streamlined as possible, to ensure this the Body was given sweeping curves. 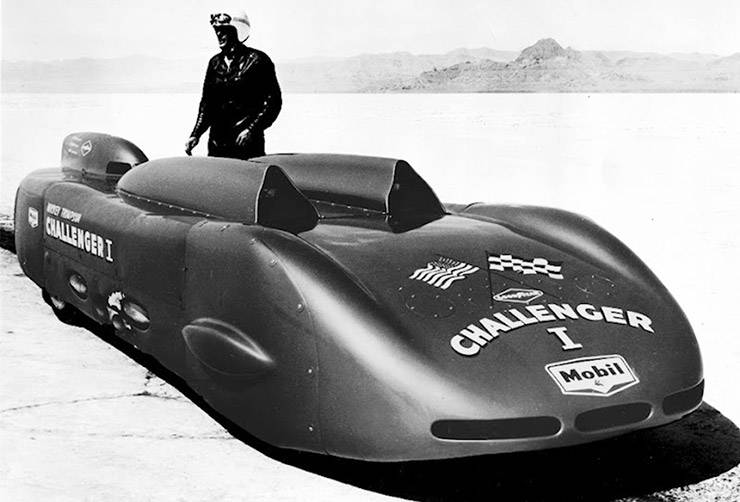 Challenger was soon completed and ready to make a pass at Bonneville. However, Mickey did not want to head out to the salt flats with her untested. In the early days of the summer of 1959 Goodyear tires was able set up a test for M/T at Edwards Air Force Base. During this test, Mickey would reach 250 MPH before spinning out on the runway.


However, Goodyear would continue to support him and on October 6, 1959, the long-awaited day had finally come. M/T and his team drove Challenger out to Bonneville on an open trailer that was hitched to his 59′ Pontiac. 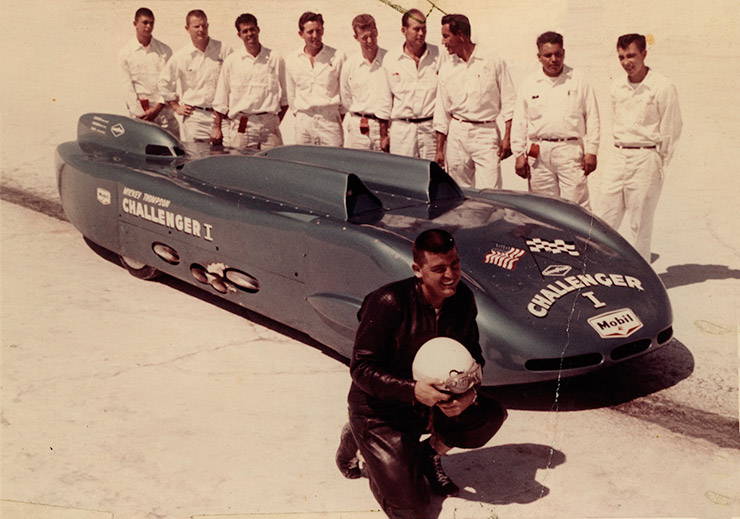 M/T was ready to make the run of his life and get Challenger to push the envelope and break not just the 400 MPH barrier but John Cobb’s long stand 394 MPH record as well!

Disappointingly, 1959 would not be Mickey’s year to achieve this feat. Sadly the fastest Challenger was able to go was 363.48 MPH which did set a record in the A/BFS class that would stand until 1990. However, this was not the 400 MPH goal that he wanted to reach. He wasn’t ready to give up on his goal of 400 MPH and his plan was to try again in 1960. During the next year he would make several changes to the car including dramatically redesigning the nose and tail to reduce drag and make the car even more aerodynamic than before.


He also realized that he would need more horsepower if he was going to reach 400 MPH. He would add a 6-71 GMC supercharger to each of the Pontiac motors which brought the horsepower up to 750 per engine!  Since the engines were now supercharged hood scopes had to be added to the body, which had to be as aerodynamic as possible since they would disrupt some of the aerodynamics in the body. 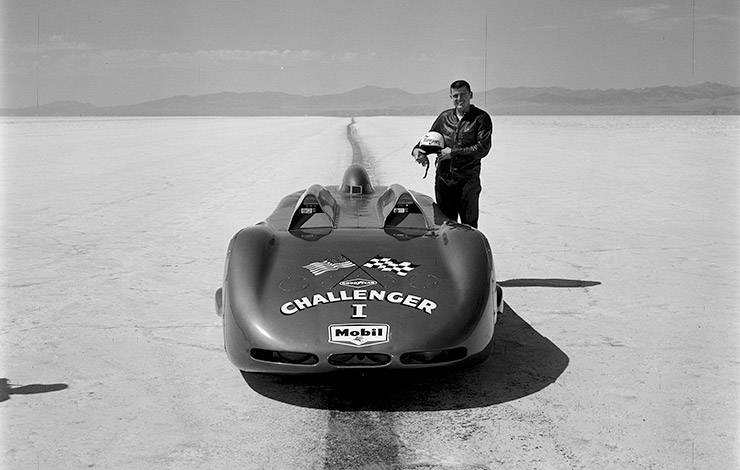 On September 9th, 1960 it was time for Mickey Thompson to make his faithful run for 400 MPH on the salt flats. He and Challenger were ready to go down in the Hot Rod and Land speed record books. On his daring run he would not only break the 400 MPH barrier but he would be able to carry Challenger I to a speed of 406.6 miles per hour!

Sadly, mechanical troubles prevented him from making the return run that is required to get the official record. However, on that September day in Bonneville Utah, Mickey Thompson may have only set an unofficial record but he did go faster than any hot rodder in the world and faster than any man on Earth! 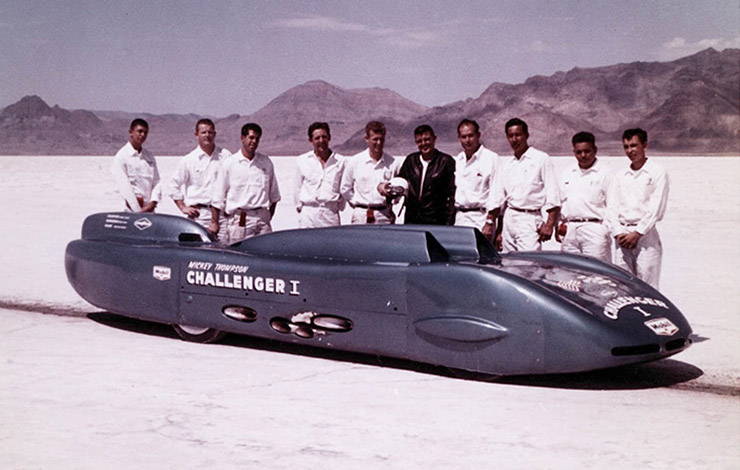 His accomplishment would inspire a new generation of American Hot Rods such as Art Arfons and Craig Breedlove to push the envelope even further and set goals such as 5 and 600 MPH! I bet if you ask any Hot Rod today they will say that Mickey did set the 406 MPH record on that September day.

Today the Challenger 1 sits on display in World of Speed Motorsport Museum in Wilsonville, Oregon, where historic race cars, boats, and motorcycles tell the story of America’s motorsports culture.
–