A Texas man used his mega mud truck to help a woman from the floodwaters around her home in what one local called a “redneck rescue” in Millsap, Texas, during major flooding that struck the region this past week.

Flooding in Houston has killed at least six people after a series of storms, and the dangerous waters have also submerged parts of North Texas. A woman in Parker County, about 35 miles west of Fort Worth, found herself stranded in her house until her neighbor Cole Geeo drove his 8-foot-tall truck to her home through the shallow but rising water.
Geeo then brought Deborah Wright to safer ground. “The water came up so fast this time and we didn’t have the warning that we usually get,” Wright told ABC News. “It just came up so rapidly, it was like somebody was turning on a huge water faucet. Before you know it, here comes Cole who comes riding through all that water to come get me,” she added. 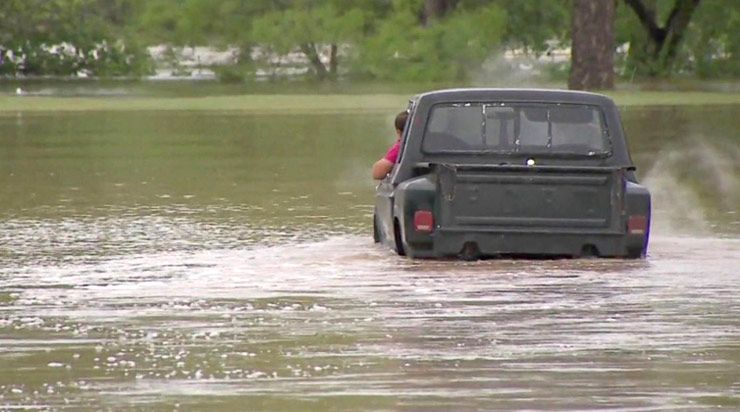 She was caught on video climbing down one ladder and then up to another into her ride to safety. Minutes later she was back on dry land.

“That’s a redneck rescue I do believe,” said Dina Young Gray, Wright’s co-worker at Millsap ISD. She called around for help when Wright was in trouble. “That’s just how Millsap is,” she said. “We just look out for one another… If this didn’t work, we were going to get a boat.” 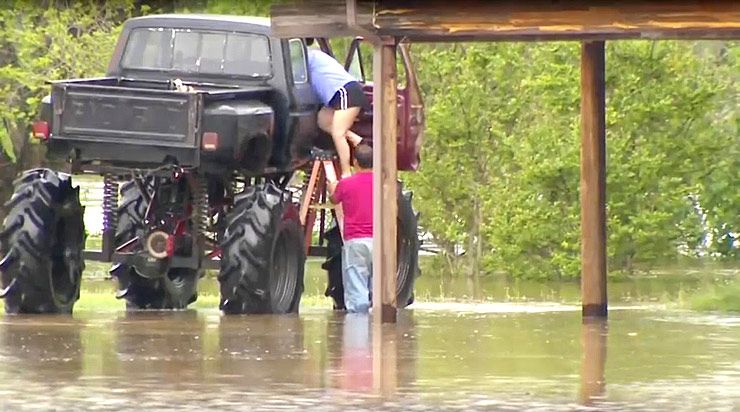 The top of Geeo’s self-built 1978 Ford F-150 pickup truck is ten feet off the ground and the tires are 63 inches tall, so he was able to drive down the flooded roads. Because the mega truck is so tall, Wright said she had to use a ladder to get inside.

Earlier in the century, there were similar trucks and they were used to move through swamps, mud and water. Mega mud trucks are very useful over flooded land, and now you can see such use.