Postwar America saw its sports car market completely dominated by European manufacturers, even though the ‘Big 3’ all offered various top-shelf sport coupes, they just weren’t nowhere near ‘sporty’ enough for the new breed of car buying customers, the teenager.

With the end of fighting across Europe and East Asia, thousands of young G.I’s began to head home. Their newfound experiences of thrills and danger alike could only be refueled by such down-to-earth delights as freedom, lost youth, and life in the fast lane. The Hot Rod was borne out of this new fever and excitement for faster vehicles than anything one could buy from the local showroom, in a country where the family saloon still ruled.
–
Individual car manufacturers began producing kit cars and one-off custom cars for the new speed freak. These fiberglass body kits could easily be slotted over that old Ford or Buick rail lying at the bottom of the garden, or languishing at the back of dad’s old garage.
–


One such forward-thinking designer was Frank Kurtis, who after building several one-off Indianapolis racecars, decided to go one step further and produce a custom-built fiberglass sports car for the general public in 1949.

His 2-dr Kurtis roadster came complete with a choice of race-tuned engines and transmissions coupled with body styling not a million miles from the top Italian sports cars of the day. Sadly only 36 ever reached the public and due to the overall expense of the project, Kurtis decided to sell this part of his business as an ongoing concern to a major entrepreneur, Earl Muntz.
– 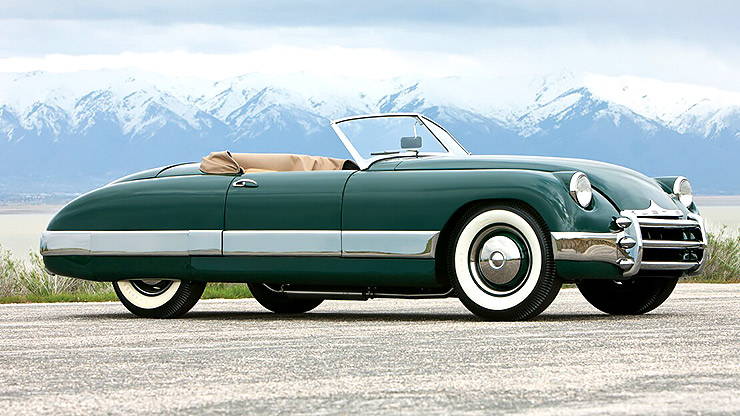 Hucksterism in America at this time was prolific and ‘Madman’ Muntz was top of the crop. A larger-than-life character, who’s claim to fame was the invention of the 4-track in-car stereo. He was a self-taught engineer who sold countless thousands of vacuum cleaners and TV sets to an eager for anything in the way of household gadgets, postwar America.
– 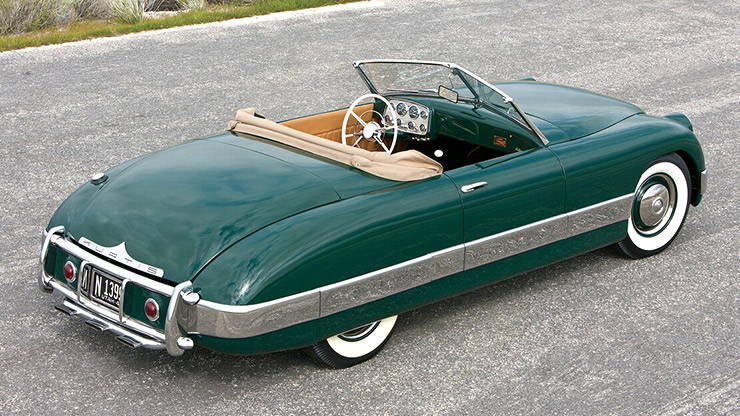 Earl Muntz began his career shortly after the war selling used cars, where he coined the phrase, “This guy’s insane, come take advantage of his crazy prices,” as he promised to smash up a car live on TV, with a sledgehammer, if it didn’t sell that day.

He walked away from this business with a cool $72 million in his back pocket and after buying a Buick-engined custom from Frank Kurtis in 1948, decided he’d try his hand at making cars of his own. He bought the Glendale CA company in 1950 and immediately acquisitioned Frank Kurtis to alter the existing roadster by stretching the wheelbase by 3″ and after a little cosmetic surgery, the ‘all-new’ Jet was released, complete with Cadillac’s 331.1 ci OHV V8 and a GM Hydra-matic transmission to boot. 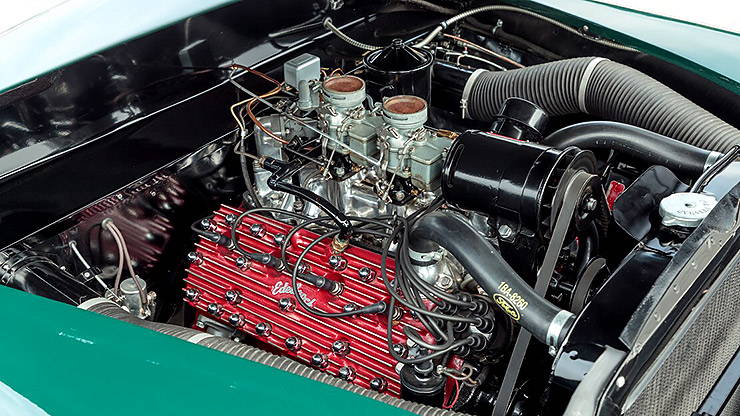 The car was also given a nice new padded hardtop over its new aluminum body shell, but at a price of nearly $5,000, it was not cheap…When you consider year of Chrysler stack this year was the Newport Town & Country 2-dr hardtop, at a mere $4,000, then you can see an immediate flaw in Muntz’s plans for the future. If he was aiming his new sports car at the younger generation, then he’d failed and as for the heads of family life, then it was a no sale, as the big old saloon was firmly placed at the heart of American family workings.


In 1951 Muntz moved production to Evanston, Illinois, where he got Kurtis to further stretch the wheelbase by another 3″ and change the bodyshell to steel. A removable padded hardtop was offered and the Cadillac lumps were dropped in favour of Lincoln’s big L-Head 336.7 ci, which when fitted with a tuned 2 barrel Holley carb, pushed the Jet’s top speed up and over the 100 mph bracket. 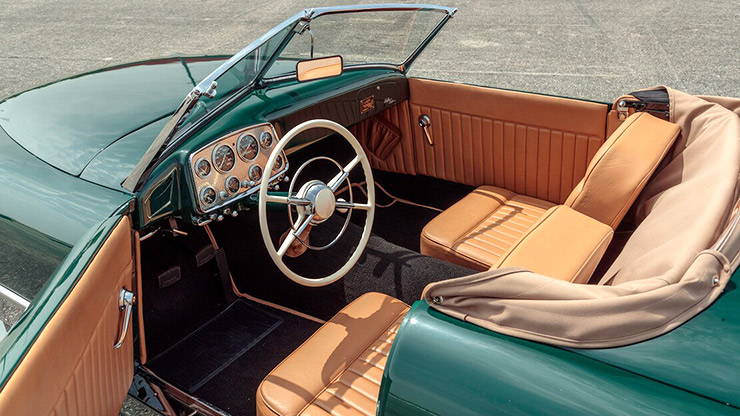 A bumper crop of 236 cars were turned out this first season in Illinois, at a price tag of around $5,515. A sum that the public were still not prepared to reach for and so Muntz decided to pull the plug and count his losses. He knew when a good thing was going sour. Frank Kurtis returned to California to rekindle his own dream of high-powered sports cars and in 1954 produced one of post-war Americas most desirable rides, the Caddy engined 500M. Premiere of Kurtis 500-M with Hollywood star Betty Lee in front of the car[/caption] When equipped with the stock Cadillac 331 engine, the 500M would reach 135 flat out, and with the optional modified Caddy motor, the same car could reach 175 mph. It may not have been the prettiest thing in the world, but you can’t deny she was potent. Less than 30 were built and approximately 5 are known to survive. If you see one for sale, then a price tag of $150,000+ is usually hanging around its bumper.


It is estimated that around 394 Jets were built and at least 49 survive today. Muntz once said that the tooling alone cost him $75,000 and labour costs were a monumental $2,000 per car, due to all the body panels needing to be carefully fitted and leaded-in. He once told Kurtis in later years that every car was sold at loss. Muntz died in 1987 whilst dealing heavily in the new cellular phone industry. A true salesman to the last, he married 7 times and drove a custom Lincoln Continental, with a TV built into the dashboard. His legacy to the car industry though, although very short-lived, was to produce America’s first real sports car, at a time when Corvettes and T-Birds were still only doodles on a designers note-pad.

1949 Kurtis was the car that graced the first-ever issue of Motor Trend. Watch the video below.