What does work truck say about the owner?

Jeff Dyer has been heavily intrigued by customized vehicles and everything in the power sports segment for years. It wasn’t until a little more than a decade ago, however, that he took notice of where his true calling lay.
– 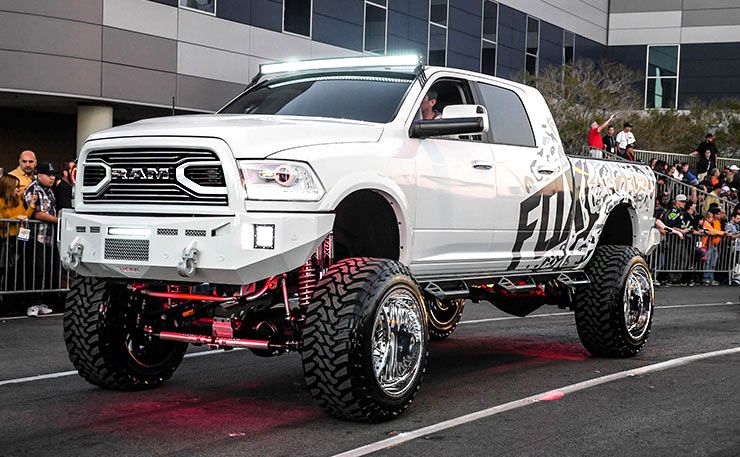 Jeff got mixed up in trucks back in 2003, taking an immediate interest in diesel performance while working on the road for Fox Head, Inc. He was on the road so much during those days that he would end up spending weeks on end surrounded by custom rigs and bikes of all kinds.

While he could choose to travel in the comfort of a plush sedan, that’s not his style. He’s a truck guy and he’d rather ride high and fun on the road than settle into car and follow the crowd. Besides, you can’t carry mountain bikes, dirt bikes and the like in a sedan.
– “I put in about 50,000 miles a year on some of the trucks I was driving around while I was a road rep with Fox Head, Inc. When I would go to trade in one model for a fresh one, I was always impressed with the value retained by the diesel trucks I was driving.”

And why have a stock truck? he asked, when a few aftermarket upgrades would give him a unique ride that fit his needs and personality. With each and every new custom truck Jeff got behind the wheel of, the bigger and more impressive his creations became. Ideas and themes were constantly built upon, and the execution of the builds started to mature as well. In the case of his 2016 Dodge Ram 2500 project, Jeff took on a great deal of the modifications himself, especially for the truck’s most noticeable facet, its aggressively tall suspension setup. For the best results possible, an 8-inch McGaughy’s lift kit with extended links was combined with a full set of none other than Fox Racing Factory series coil-overs and bypass shocks. American Force wheels and Toyo rubber tied the Ram’s aggressive new look together. When the dust settled, it was apparent that nothing and nobody would be stopping this truck in its tracks. 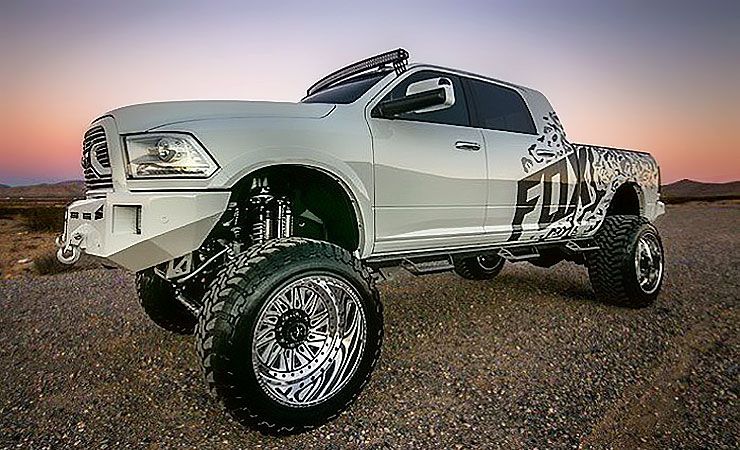 To complement the Dodge’s rough and rugged suspension system, the rest of the exterior had to undergo a solid reconstruction phase. With the height increase, a set of three-step N-Fab running boards was installed to make hopping in and out of this truck without pulling any leg muscles a reality.

Front and rear Fusion laser-cut American steel bumpers have taken residence on the Ram and add to the truck’s already strong, rough and tough demeanor. Jeff’s vision of building a bold yet understated tank of a pickup truck started to come together.

Aside from the suspension setup, the build was never meant to get too intensive. Of course, while its dominating and capable demeanor stands at the forefront of what onlookers notice first about the big Dodge diesel, a lot of details were scaled back to fall into formation with the truck’s subdued styling plan. Inside the cab are tons of custom touches from the custom Roadwire leather seating to the full-scale JL Audio sound system. Some of the more overlooked touches are the Edge CTS2 gauges and painted pieces. Simple and understated, that’s just how Jeff had envisioned a good deal of the truck remaining even after it had been customized.

The Ram was built with Jeff’s own inspiration and personal taste in mind, a reflection of his experience in the power sports industry and the epic creations that embody it. 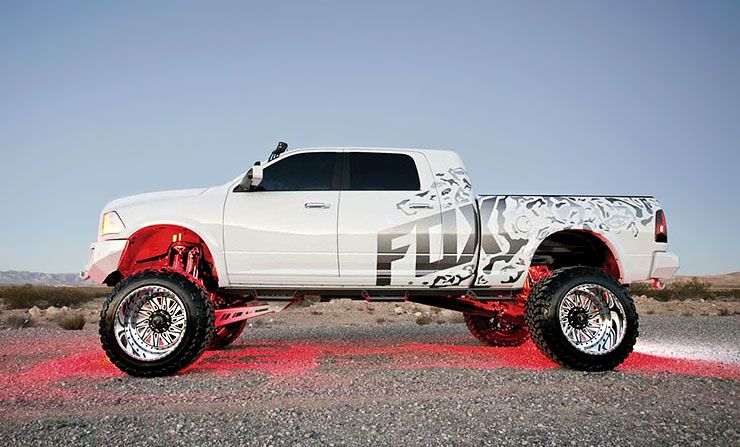