Johan Eriksson is one of Sweden’s most qualified car builders. His famous cars take away the attention every time you see them.
This time, we present to you his latest project: Dodge Charger RTR “Under Construction” that will be officially presented in 2016. In fact, the car was already presented to the public, although it was still in the process of creation.

The first stage of the car was presented in 2013, and now the team has come a long way.


Johan Eriksson’s Dodge Charger RTR “Under Construction” was again in the spotlight at Bilsport Performance and Custom Show 2015. Johan Eriksson is known for his exceptionally good cars, and it looks like this one is going to be the best of them all.
“A superb craftsmanship, amazing car”, commented the visitors, so it is not surprising that everyone wanted to see the car and to get more detailed information about it.

When it comes to the cars of Johan Eriksson, you know that everything about them is extreme. This car is no exception and you can see that on the images and from the video. There is another master who gave his contribution in the preparation of the body, and that is Mats Thollander. As for the mechanics, this totally crazy Dodge Charger RTR is actually like Frankenstein.

It has parts of several different cars, but in the creation of hybrids like this one, only the true masters know how to create harmony among the parts. Johan Eriksson is already proven in that field. The results are always astonishing even to the greatest car fans.
Surely many of you remember, and for the others we will mention again that his black Dodge Charger nicknamed “The car with the big roar”, was one of the most remarkable cars in 2011 at SEMA. With this car he also won the awards Sweden’s Most Beautiful Car and Car of the Year People’s Choice Award – Norway & Finland.

But, let’s go back to this Charger. 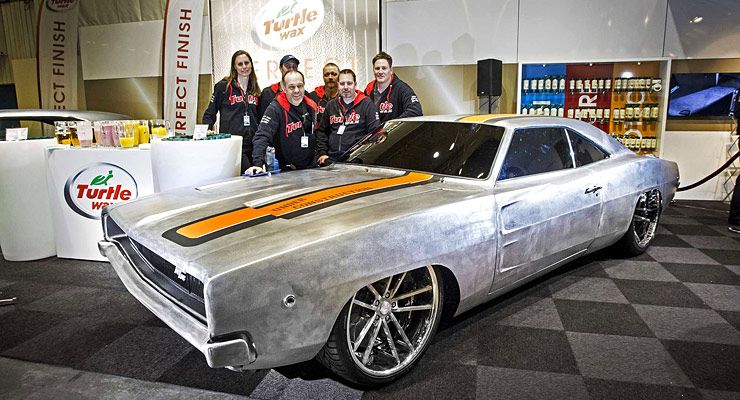 The brakes are taken from Bentley – carbon ceramic, 420 mm front discs with eight-piston calipers and 381mm discs at the rear. The car is lying on the Corvette C6 chassis, and in the space under the hood there is overcharged Viper V10 engine. It has either twin turbochargers, or maybe up to four turbochargers – and maybe a compressor as well.

Johan and his team have already spent many hours on the extensive modification and will continue to develop it in order to finish the car. We are eagerly waiting for it to become clear.