In the 1960s, Toyota released a car that would change the Japanese motor industry forever. 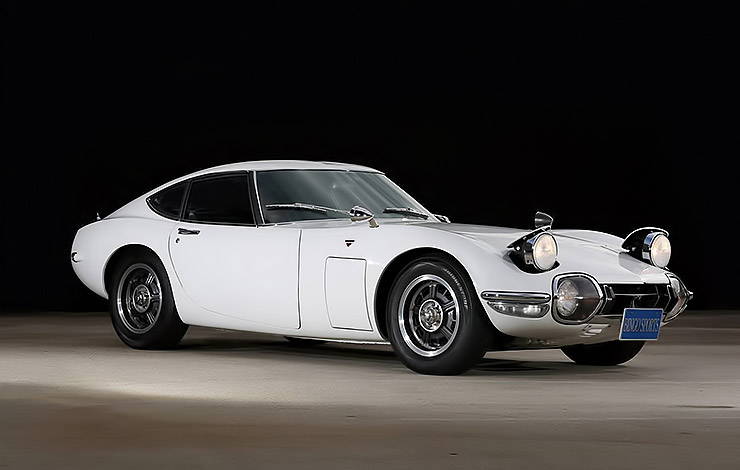 If you were unaware of this car and its place in automotive history and someone were to ask you about Toyota’s contribution to sports cars, you would most likely think back to the 1980s and the MR-2s, Celicas and Supras that were making their mark amid a massive wave of hot hatchbacks that were quick, lithe and economical. Maybe a few people would look back a bit further to the 1970s and the beginnings of the Celica GT, but the mid to late ’60s? Toyota didn’t make anything to fit the sports car billing back then, did it?

Well, Toyota did build a ’60s sports car, for a few short years anyway. First conceived as a two-seat sports coupe with fastback styling for Datsun, the car that went on to become the Toyota 2000 GT was styled by Graf Goertz, who had been responsible for the svelte styling of the BMW 503’s and 507’s. At the behest of Datsun, Goertz worked with Yamaha and built a running prototype of the design in 1963. Despite instigating its development, Datsun didn’t go for it and allowed Yamaha to do as it wished with the car, which was to pitch it to Toyota.
– 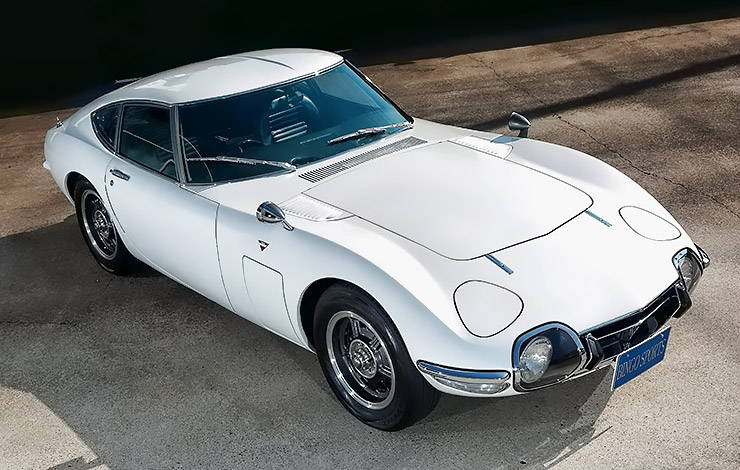 From this prototype, what Toyota created was a GT package that was perhaps the most well engineered and designed production offering of the period (the cars were actually built by Yamaha). Off of a sheet-metal backbone chassis was hung a coil-over sprung independent suspension system comprised of unequal length wishbones front and rear along with anti-roll bars.
– 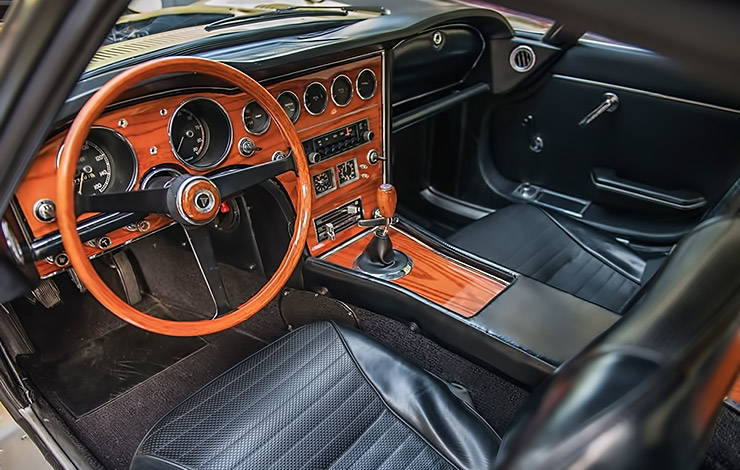 The rear lowers were adjustable; and the uppers, drilled for weight savings, had the coil-over strut mounted on top and connected into rigid strut towers that were incorporated into the backbone chassis. Rack and pinion steering offered crisp directional control with a quick 2.7 turns lock-to-lock.

It was also the first Japanese production car to use disc brakes at all four corners, these being power-assisted, single-caliper Dunlops. Playing even more to the GT racer theme were cast magnesium rims held in place with center knock-offs. 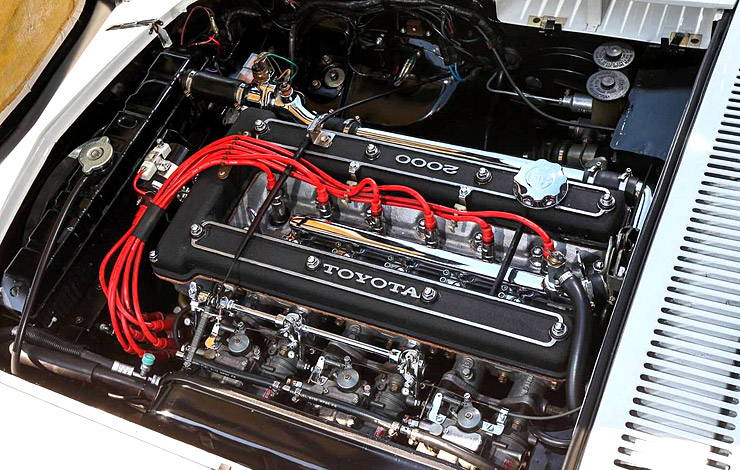 Power came from a 150-hp hemi-headed twin-cam version of Toyota’s rather mundane production 2.0-liter inline six-cylinder engine. Toyota backed this formidable little mill (it made its peak horsepower up at 6,000 rpm with an 8.4:1 compression ratio) with a five-speed manual gearbox of its own design that featured synchromesh engagement on all gears. Weighing in at about 2,500 pounds, the 2000 GT was good for 15.9-second quarter runs and 0-60 mph in 10 seconds – at least that’s what Toyota stated. Though the speedometer ran all the way up to 160 mph, top speed was in the 120-130-mph range. 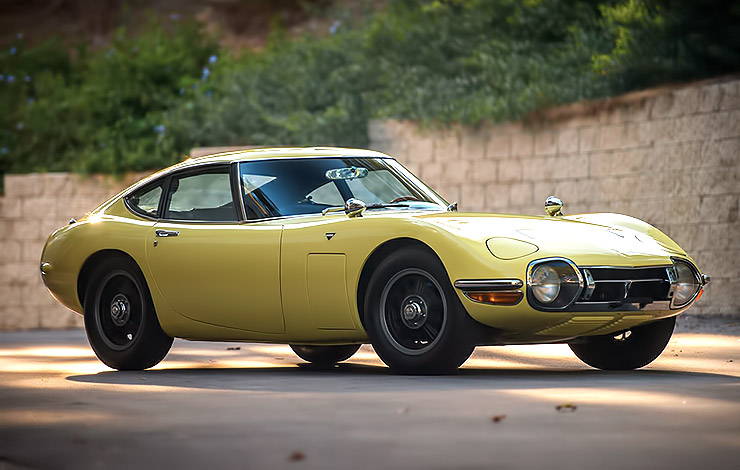 Between 1966 and 1968, 351 2000 GTs were built; reports indicate that between 50 and 65 of these were imported to the U.S. The American public got its first look at the 2000 GT at the 1967 New York Auto Show; and though one would have expected it to establish quite a following, it never caught on. This is most likely because of its higher price (nearly $7,000) in comparison to what was available from Jaguar, Porsche and MG. Even the appearance of a 2000 GT convertible in the James Bond flick, “You Only Live Twice,” did little to encourage sales in the States.


Where it did distinguish itself as a GT of the highest order was in competition. In 200-hp tune, Toyota’s two-seat fastback coupe broke numerous international speed and endurance records. In 1968, Carroll Shelby backed a two-driver 2000 GT team in the SCCA’s C Production class, and racked up several wins and podium finishes in its single season as a serious competition effort. 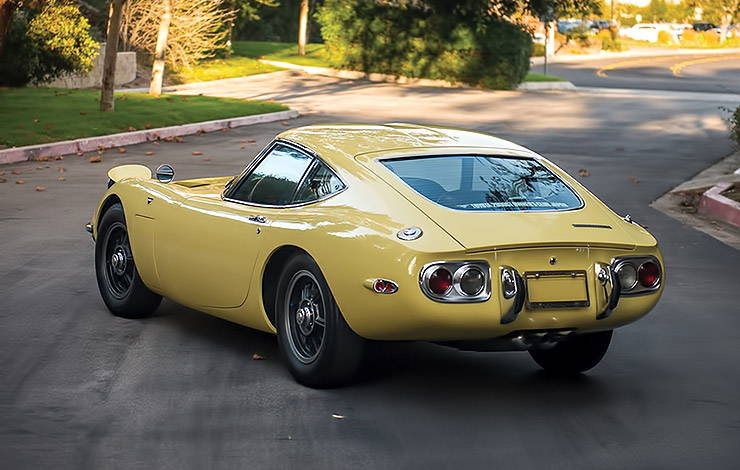 Though few had an interest in this short-lived sports car when it was new, today it is considered to be one of the few collectible Japanese cars of this period. As one of these it is the most highly sought after, and is a real feather in the collector’s cap. Just a little reminiscent of a certain American automobile named the Superbird, now, isn’t it?