The uniqueness of this 1934 coupe goes beyond what you see, and there’s a lot of unique to see. It was built as few cars can be—with the builder’s single vision and unlimited funds. The ideal project conditions to be sure, which result in a spectacular build. 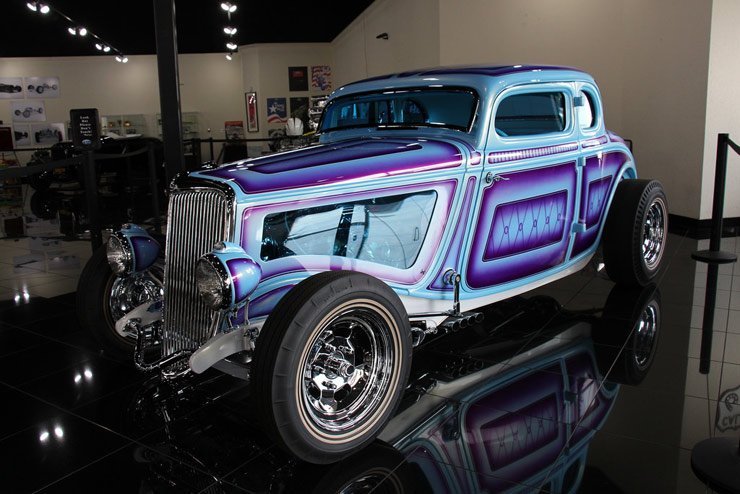 “Iron Orchid” had its public debut Detroit Autorama; securing five awards — the most awards earned by any car at the show — including a first place for the Altered Street Coupe class and honors such as Outstanding Street Rod, Outstanding Engine-Rod, Outstanding Undercarriage and Outstanding Use of Color Design. In addition, “Iron Orchid” was also selected for the Street Rodder Magazine Top 100 award. According to Robert Williams, who aptly named “Iron Orchid,” Boeckmann’s ’34 Ford Coupe was “taken to the level of Critical Mass Excellence.”

The 1934 Ford was designed and built by Dave Shuten at Galpin’s North Hills, Calif., shop over the course of 18 months, under the watchful eye of GAS President, Beau Boeckmann. Built to emulate the extreme show cars of the 1960’s, Shuten relied on a combination of period-correct, pre-1965 parts with hundreds of custom fabricated pieces to finish the car. 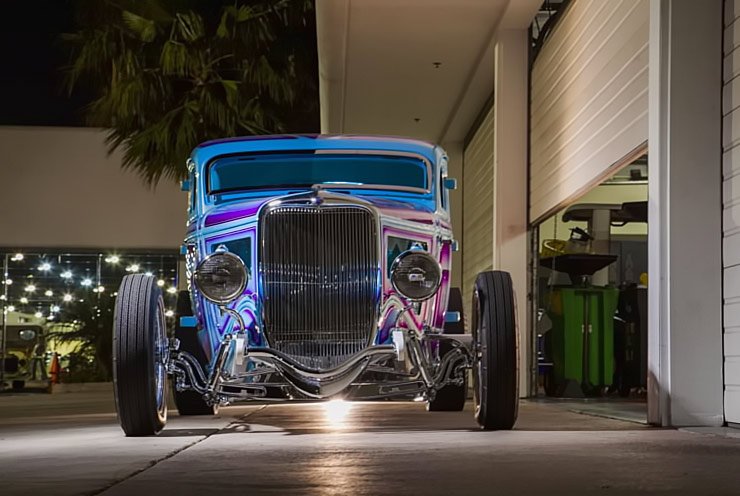 “I couldn’t be more proud of Iron Orchid, Dave Shuten and the team,” said Boeckmann. “They’ve put together one of the most beautiful cars that has ever come out of Galpin and the most beautiful hot rod I have ever seen. This car really shows the pride and quality of workmanship of everyone here and demonstrates what they are capable of doing.” 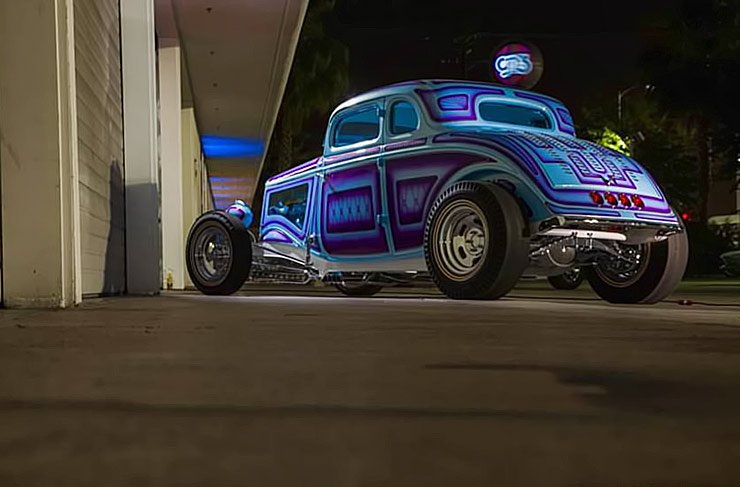 Separating Galpin’s ‘34 from other hot rods on display were a number of striking elements that rely on innovative or never-before-seen uses of materials and finishes. Clear blue acrylic panels were used for the windshield and windows, while also replacing steel in select spaces, allowing the driver and on-lookers to see many of the unique working mechanicals of the car. The acrylic panels in the hood provide views of the upholstered firewall and engine even while closed. Inside, acrylic is also used, affording the passenger and driver an unobstructed look at the chromed transmission internals.

More than 2,000 individually chromed pieces went into the car. One of the centerpieces, requiring special attention due to its prominence, is the grille. Specialized silver solder and lead were used to create a solid piece that, after chroming, effectively became a fluid-like sculpture at the front of the Ford. 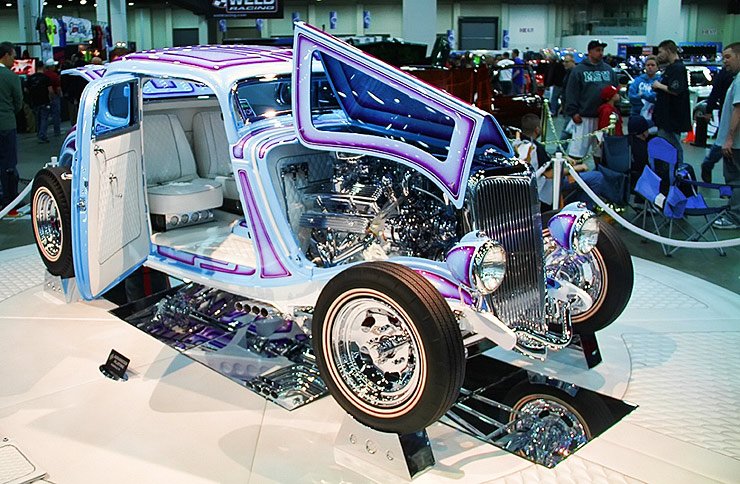 “I took everything that I loved from four genres of cars of the mid-1960’s era – show cars, customs, race cars and hot rods – and tried to incorporate elements of each into one that would blow people’s minds,” said Shuten. “I was blown away by the response, it certainly seemed like ‘Iron Orchid’ was one of the most talked about cars of the show and that means more to me than winning any award.”

Automotive legend “Blackie” Gejeian had his own thoughts while looking at “Iron Orchid” on display at the Autorama, “I would put this car against any car in here, there isn’t plate work like that done on any car in here. This is the greatest chrome I have ever seen.” 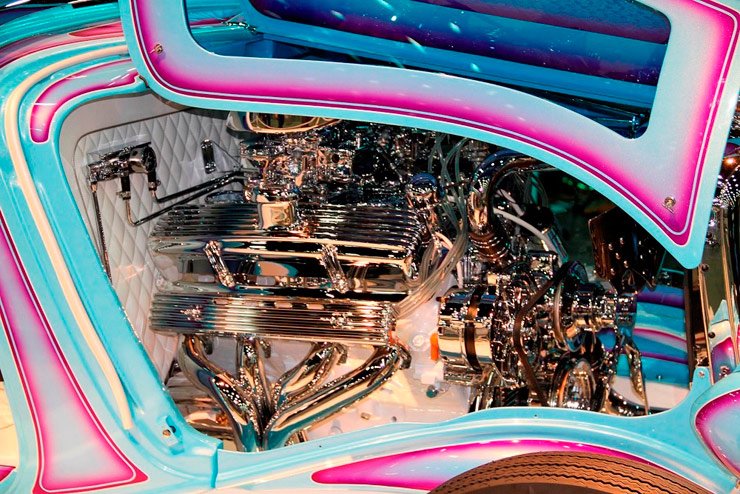 In addition to the work completed, Shuten and Boeckmann relied on additional help from both inside Galpin, as well as other respected friends. The drivetrain, a 1964 Ford 427 side oiler V8, mated to a 1965 Ford top-loader 4-speed transmission, was built and prepared by Galpin Classic Auto Service. All the chrome was completed by Steve Tracy at Advanced Plating; the one-off four-piece hood, to accept the acrylic inserts, was custom built by Bobby Walden, and a custom set of tires were created for the ’34 by Hurst Racing Tires, which were modeled after Mickey Thompson Super Stock Drag series. The over-the-top period-correct full-custom paint was completed by Darryl Hollenbeck of Vintage Color Studio. 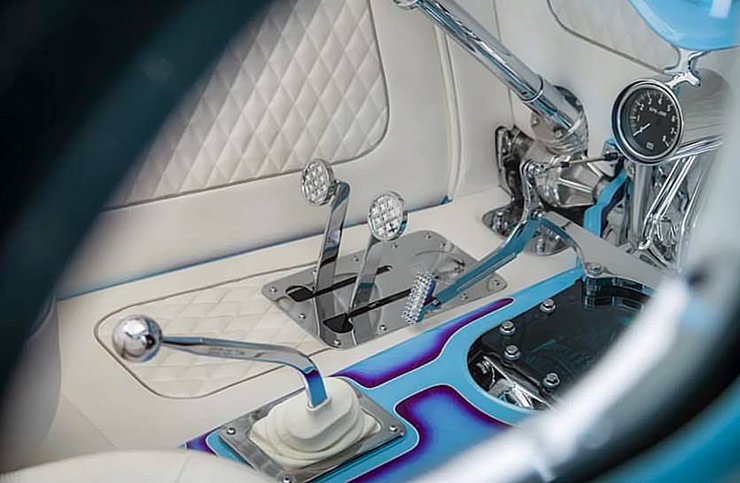 Though this was Galpin’s first entry contending for the Autorama’s Ridler Award, they’re no stranger to the world of award-winning customs and hotrods. In fact, this is Galpin’s 60th year of customizing cars both classic and new. In addition to customizing, GAS offers full builds of hot rods and customs, full restorations and restomod fabrications. GAS also maintains the world’s largest collection of Ed “Big Daddy” Roth cars and memorabilia, as well as a collection of historically significant race cars, hot rods and show cars from the ‘50’s and ‘60’s. In GAS’ retail store, customers have access to the full-line of parts, accessories, and branded merchandise, from the legendary Moon Eyes and So-Cal Speed Shops. For enthusiasts wishing to commission their own turn-key vehicle, the expert staff at GAS will design and build whatever the buyer chooses, following the mantra “If you can dream it, we can build it.”