Built in the early 70’s, by Richard Zocchi of Sacramento, The Cool 50 Merc is one of America’s most famous Mercurys. The car has won many awards and has been toured nationally. 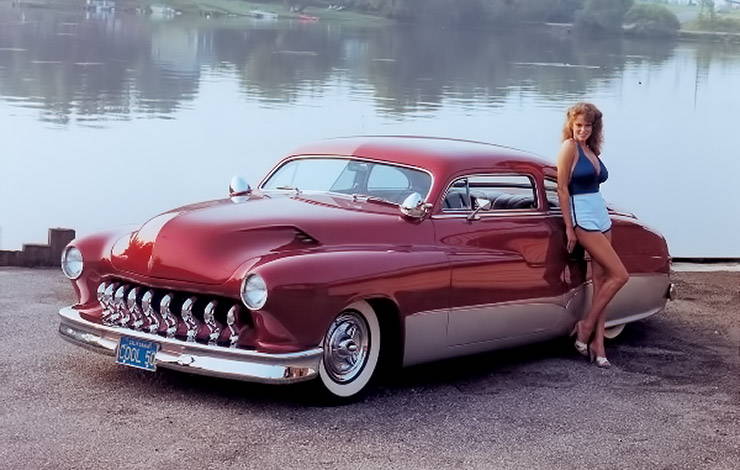 From his memorable scenes in the iconic fifties film Rebel Without A Cause, James Dean may be the most legendary figure associated with postwar era Mercurys, but many will readily recall the chop-top Merc from the early 1973 film American Graffiti, as it sparked a revival of interest in these early lead sleds. In its original form, as envisioned by E.T. “Bob” Gregorie, the design was remarkably elegant, in much the same way a sailing yacht slices through the water, creating a subtle wake from its bow that seems to flow from the fenders to the doors.

Using this design as a wonderful starting point, Richard Zoochi of Sacramento set about building one of the sharpest “sleds” ever seen and the result, which he completed in 1976 and named the “Cool Merc”.
– 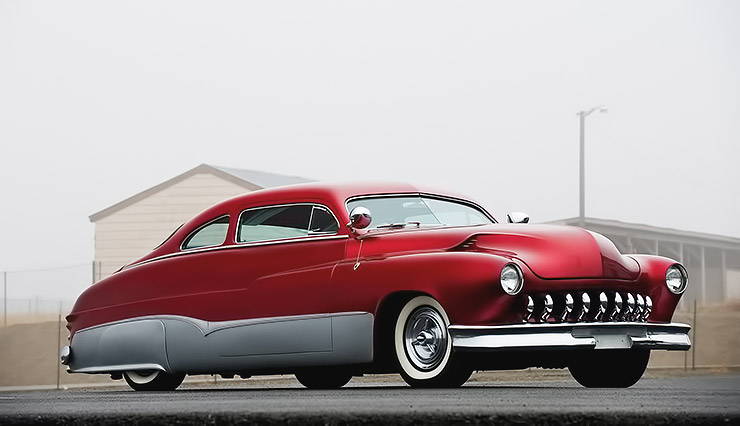 Influenced by the talents of Gene Winfield as well as other custom builders from the 1950s, no detail would be overlooked and most every customizing technique was utilized. Starting with a solid 1950 Mercury coupe with a California heritage, the body was stripped to bare metal, sanded and prepped. Certainly, the most critical step in creating this work of art was the chopping of the top, completed by master builder Bill Reasoner.
– 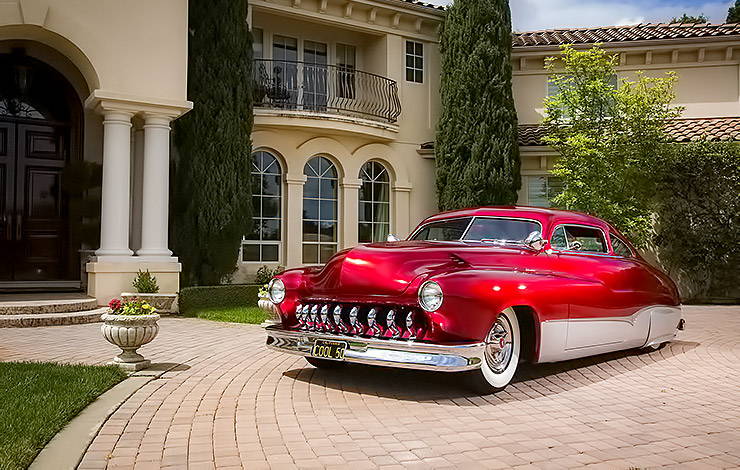 In keeping with the tradition, both the hood and trunk lid were stripped of their ornamentation while the exterior door handles were shaved, their function replaced by the use of remote controls concealed in the driver’s side window molding. 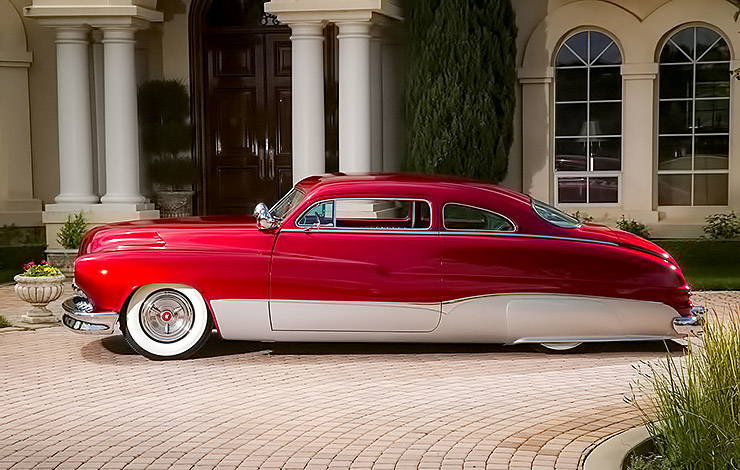 Other appointments include components from several De Sotos, including the grille from 1952 and the bumpers from a 1953 model. The original side trim was removed before the holes were filled in. Finally, a very stylish bright metal flash taken from a 1970 Buick Riviera was added, giving the car a profile that is both unique and trendsetting. Completing the picture perfect street rod are original fender skirts, Oldsmobile Fiesta wheel covers with spinners, frenched headlights and functional Appleton spotlights. 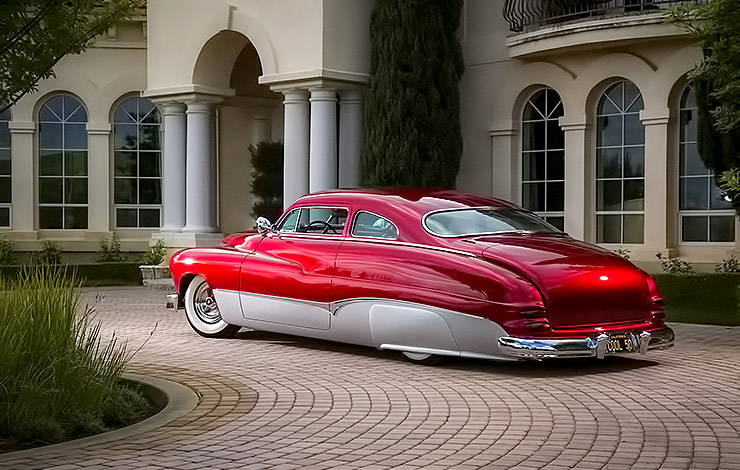 Driver and passengers are cradled in an interior by Kenny Foster of Sacramento, with individual contoured seats finished in silver leather with burgundy velour inserts. Even the trunk is finished in plush carpeting and the battery is mounted in a compartment concealed behind panels. 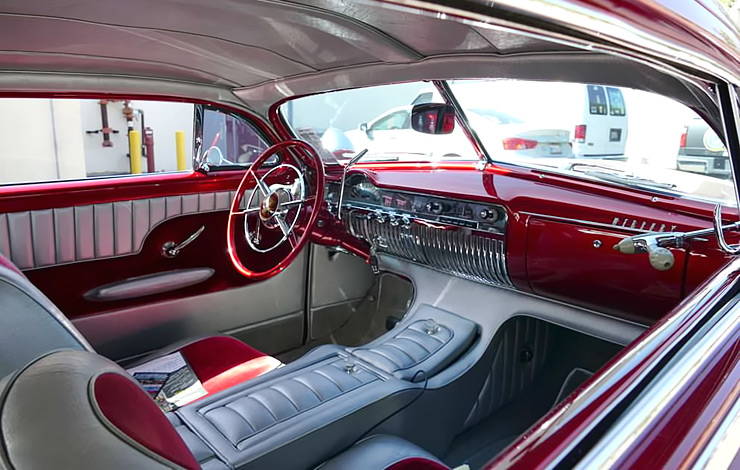 This Merc was powered by an early 1970s Ford small-block V8 engine. Eventually, the car was sold in 2001.


After years of moving from one owner to another, it is back in the hands of the Zocchi family once again. David Zocchi, Richard’s nephew, located and purchased the car back and began his restoration of this terrific custom Merc. Now under the hood sit 350 small Chevy motor. 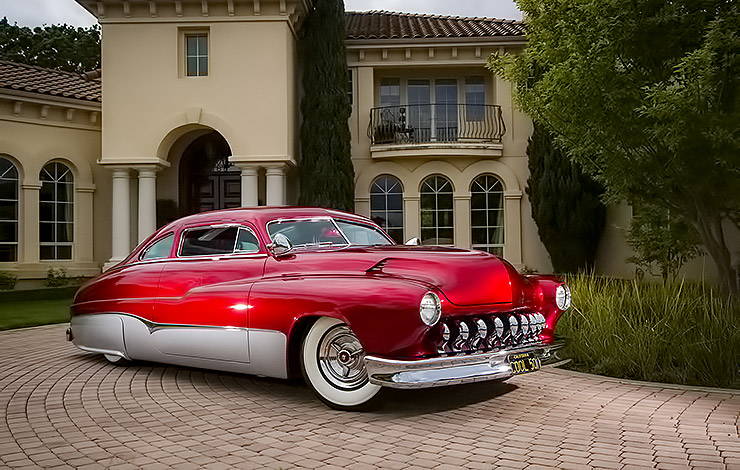 Built over 40 years ago, it has always been a favorite and welcome sight at car shows and exhibitions, winning numerous awards across the country.

More than just a stunning automobile, this custom is reported to be in excellent running order and has been exercised on a regular basis.