Cadillac Eldorado Brougham was hand-built, limited edition car with every conceivable luxury feature as standard equipment to show that Caddy was the luxury car king. 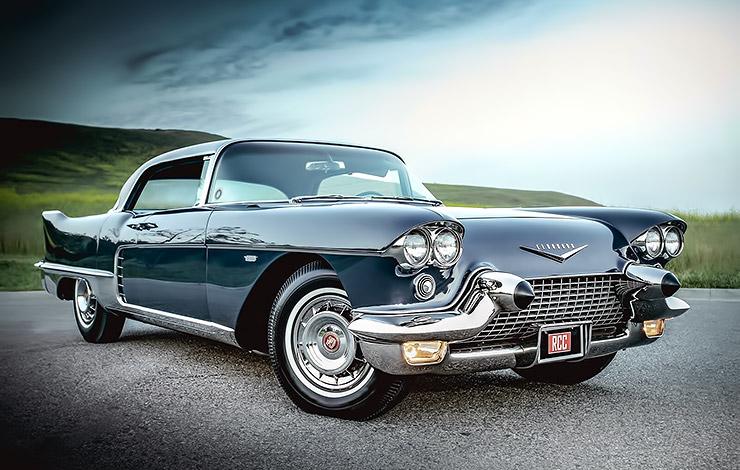 By the time 1957 rolled around, United States was doing fairly well economically, although a slight recession would hit in 1958. Even at that, auto manufacturers continued to market new luxury cars that catered to an even higher echelon of the public than usual. Ford had already come out with the Mark 2 Continental, which was not technically a Lincoln since it had its own division. The $10,000 dream car would only last two model years.

Chrysler had the new Imperial Ghia limousine, built in Italy. The Shah of Iran, Jacqueline Kennedy, General Macarthur, Nelson Rockefeller, The King of Saudi Arabia, Pearl Buck, and David Sarnoff were customers. At approximately $19,000, each one sold (132 through 1965) was a money loser. It was more of a marketing tool than anything else, designed to sell regular Imperials. Not to be outdone, Cadillac threw their dream car (and their checkbook) into the fight.
– 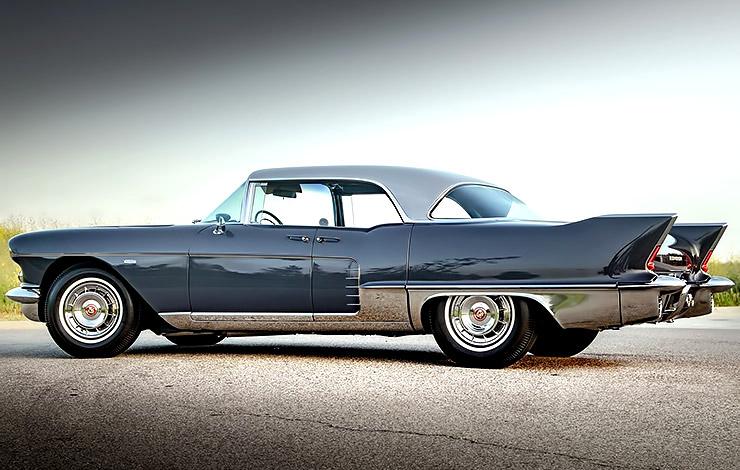 Based on a concept vehicle exhibited during the GM Motorama of 1955, the Eldorado Brougham models of 1957 through 1960 were designed to showcase Cadillac’s abilities as a maker of luxury vehicles. The Brougham was the realization of dream car designer Harley Earl, who retired in 1958. The hyper-luxurious Brougham was described by Cadillac management as the most advanced automobile ever built and a mirror of things to come. It was the most complex automobile ever offered to the American public, with features supposedly not yet found on today’s cars. Like what, the cigar humidor and the dual quads? Smoking is bad for you.

The Eldorado Brougham was the product of several years of engineering and styling development. It was preceded by a number of experimental Cadillac concept cars nobody in their right mind would have bought including the 1953 Orleans, the 1954 Park Avenue, the 1955 Eldorado Brougham prototype, and the 1956 Eldorado Brougham Town Car. Funny, the final production cars never looked anything like the dream cars, no matter whose it was, Chrysler, GM, etc. Makes you wonder what kinds of dreams these designers were having. Pass the bong, dude. 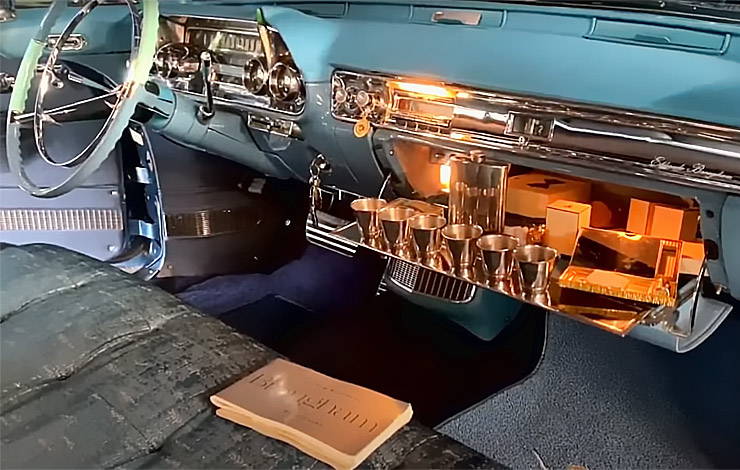 Among the features awaiting the passengers were radio / telephone, air conditioning controls, women’s vanity, cigar humidor, thermos bottle, and glassware. Sorry, no booze, you had to buy your own. An electronic locking system both secured the doors when the vehicle was in motion and opened the center opening doors when needed. Larger than the 1955 Brougham, it was 219.9 inches long and 55.8 inches high. Wheelbase was 129.5 inches. Although it didn’t much resemble the eventual production model, the Town Car illustrated what was to come for 1957. 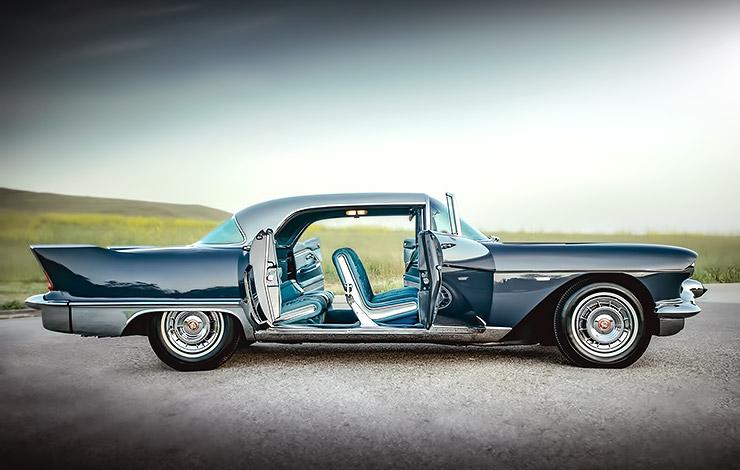 The price for the Brougham was a lofty $13,074, making it the most expensive American production car of its day. That’s twice the price of the next dearest Cadillac and even more expensive than a new Ferrari or a Rolls-Royce Silver Cloud! Unfortunately, it cost Cadillac $23,000 to build each one. I could never understand why a car company would be willing to lose tens of thousands of dollars on cars sold to people who could probably buy the company outright if they chose to.


The 1957 Brougham featured the 365 cubic inch Cadillac engine, equipped with two four barrel carburetors to help out with gas mileage, no doubt. The mill produced 325 horsepower and about 8 mpg. Hey, who cares, you got the big bucks, you can swing the 20 cents per gallon for 1957 gas.  For 1958 they switched to three two barrels and upped the rating to 335 horsepower. For 1959 and 1960, the new 390 cubic inch motor was used with tri power, producing 345 horsepower. 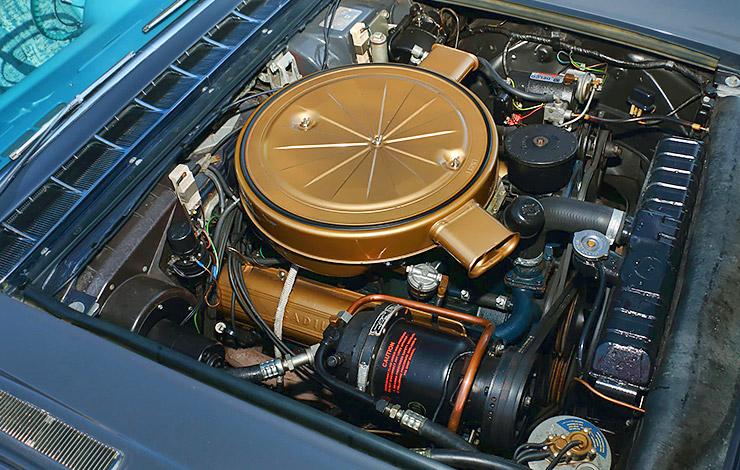 The Broughams were typically owned by movie stars, wealthy industrialists, and even a reputed gangster or two. For your money, you took delivery of the most opulently equipped car ever to come out of Detroit. It was equipped with such items as a ladies compact, magnetized drinking cups, cigarette case, lipstick holder, beveled mirror, note pad, lambskin carpet, and a perfume atomizer filled with Arpege de Lavin, Paris. For slightly less, say $10,000 less, you could get most of this crap in a Dodge La Femme leftover. The atomizer was filled with Old Spice aftershave, but what the heck, think of the money you’d save. 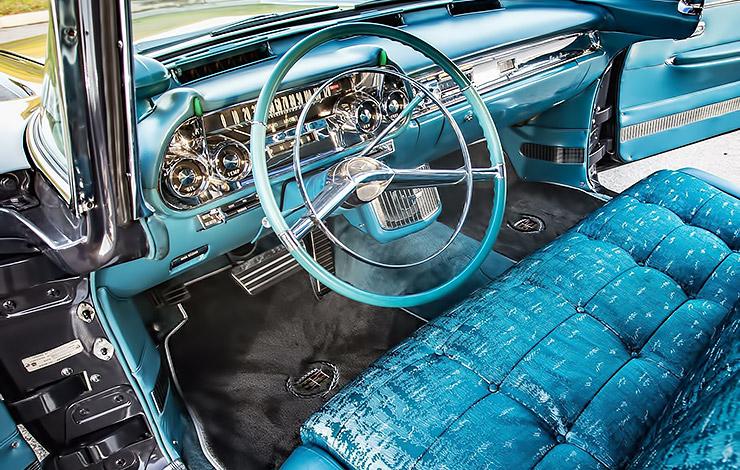 Obviously, the perfume and the drinking cups weren’t worth 13 large, but it was a nice touch. The items that made the car worth the price included an electronic memory seat position system, an automatic starting mechanism which would start the car without having to touch the key, (car thieves have this system, it’s called a dent puller) automatic trunk release/lock with a control button in the glove box, and of course the usual power assists and air conditioning. Leather seats were optional at no extra cost. 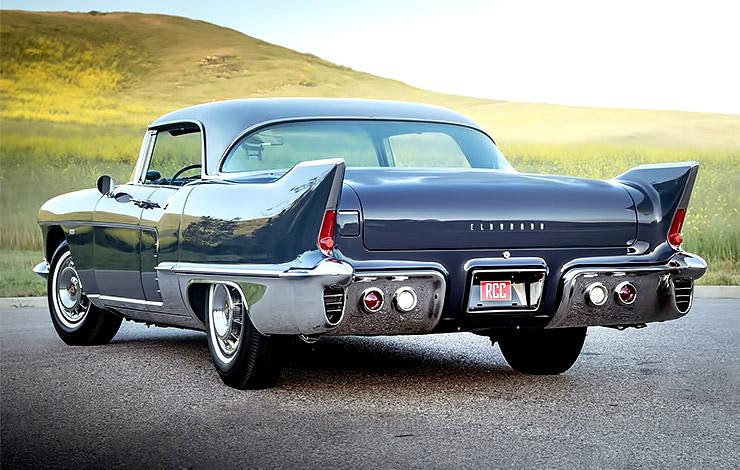 This car was strictly for those privileged few who could afford the car of the future while living in the present. The underprivileged few lived in the past and got an old Ford with Dixie cups in the glove box and a half-empty bottle of moonshine. What, no perfume? If you were lucky, maybe somebody would spill Aqua Velva on the seats.

Today more than half the total number of Broughams built survive and are in the hands of enthusiasts and collectors the world over. The majority of these vehicles remain in good to very good condition. They represent the finest of GM’s efforts of the day. I don’t know where my old man’s Ford went.
–