They say “Life is what happens in between making plans,” and for Travis Frazier that’s exactly what happened with the tale of his 1970 C-10 build.

Travis had originally been on the hunt for a nice truck to build as a driver/show piece when he came across a C-10 out of Georgia that looked to be a fairly nice project. After doing some digging, sending pics back and fourth, a deal was struck and Travis was now the proud new owner of this “really nice” C-10.
– 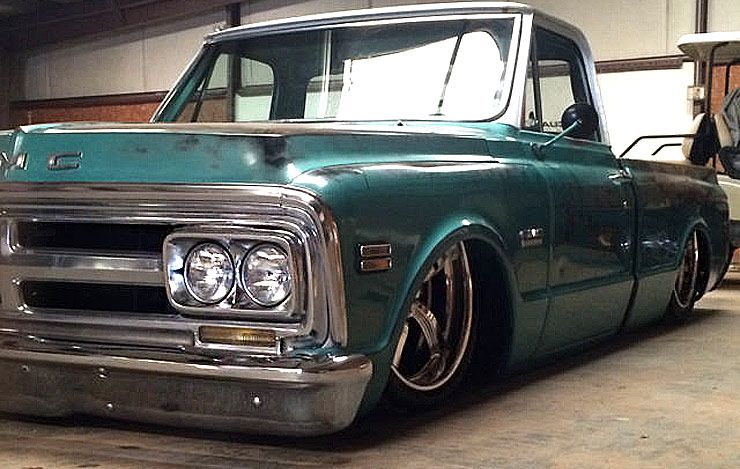 Unfortunately, that’s the thing about the Internet and buying vehicles “sight unseen” is that sometimes you just have to go for it and take that risk but it doesn’t always work out. This time around it didn’t go exactly as planned and Travis got the short end of the stick. Upon arrival, Travis and his buds did the first once-over and right away they knew this wasn’t going to be “the one.”

It turned out to be a total rust bucket and definitely wasn’t worth building with the plans Travis had in mind for it and the Porterbuilt chassis and drivetrain he already had in the works. While talking about the truck with his buddy Eric, Travis mentioned that he was going to start looking for another truck to use as the platform. Eric happened to know of a “perfect patina” C-10 candidate that was a project truck and Eric just didn’t have the time to build.
– So a deal was struck for a second truck, this time around the “all-natural” look wasn’t a complete rust bucket and was actually the perfect truck to polish out the original paint and leave the exterior as close to original as possible. The truck also had a really cool history before it fell into Travis’ hands.
It was originally purchased new by the Deer Creek Lumber Company in Rocklin, California and had spent its entire life in the lumberyard as a yard truck. So the name, “Lumberjack” was quite fitting and that’s the theme that would run through the rest of the build. The Deer Creek logo is actually still visible on the door, which was brought to life even more after the paint was buffed.
– 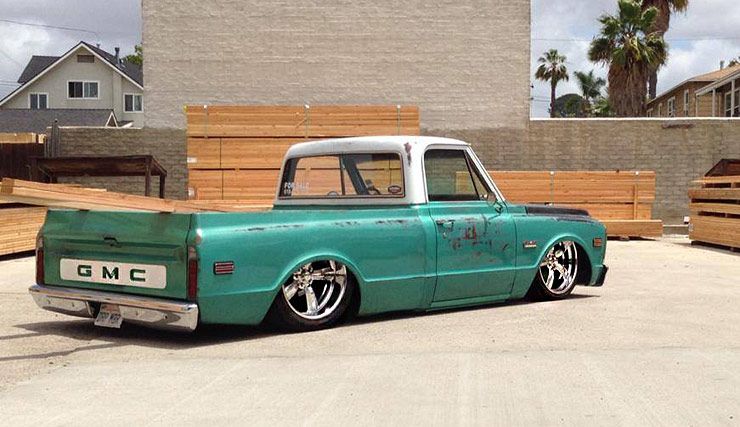 Next up, a plan was hatched to bring the Porterbuilt rolling chassis up to Sacramento from San Diego to swap the new/old C-10 body onto the chassis. After arriving with the chassis, Travis and his buddy had the body completely transplanted over the 3-day weekend. Once completing the roller, they loaded up the truck for the long trip back down south to San Diego. One of the cool things about this build was that Travis wanted to do as much of the build on his own, in his home garage, as possible. So he got the truck back to his house and started the process of re-wiring the entire truck from headlight to taillight.

With the majority of the wiring completed, next up was handling all of the air suspension and plumbing duties. Travis mounted the complete AccuAir e-level management and finalized the rest of the wiring. One thing leads to the next and he worked day and night to dial in the rest of the plumbing for fuel, brakes, and was fairly close to getting to fire up the new 355-cubic inch V-8 crate engine. Not wanting to let the project stall out, he moved to the confines of the cab and began to slowly “spruce up” the interior, while still keeping that original look and feel. A few powder coated accent pieces, Dakota Digital VHX gauges, and a Billet Specialties steering wheel brought just enough modern comforts into the cabin for cruisin’ duty. When everything was as close as Travis could get it, he called in the troops to help work out the bugs and get everything running smoothly. His friend Carson helped to tune the engine and with a little luck on his side, everything was up and running. 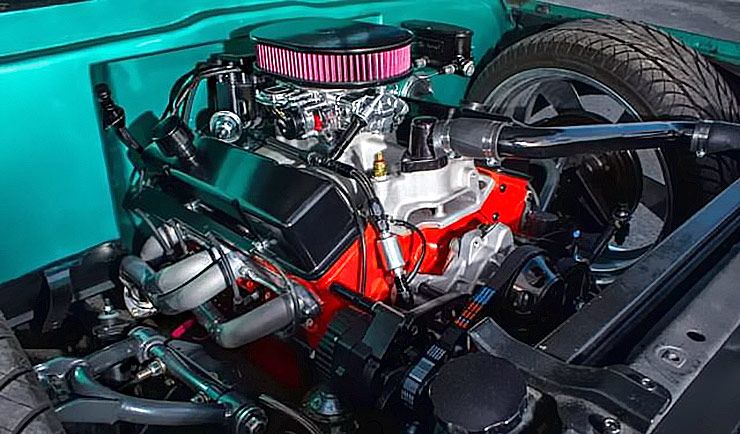 Travis had shaken off most the cobwebs and put some miles on her to work out rest of the bugs along the way. Feeling fairly confident, it was just in time to debut the build at the Del Mar Good Guys Show. Travis recalls, “It was really rewarding to see people’s positive reactions to something that I built primarily by myself in my home garage.” Proof positive that a little hard work is good for the soul, and all though things don’t always go as planned, with dedication and a little faith, they generally work out if you stay focused and make it happen!
Job well done Travis.
–
Engine/Trans: