To celebrate its 50th anniversary, Buick released a limited edition model as a present to itself and the public.

That birthday Buick was named the Skylark and it was the head-turning convertible, only available for two years, that would go down in history as one of the most sought after luxury classics of all time. General Motors released two other limited-production convertibles that year—the Oldsmobile Fiesta and the Cadillac Eldorado—but the birthday Buick stole the show. 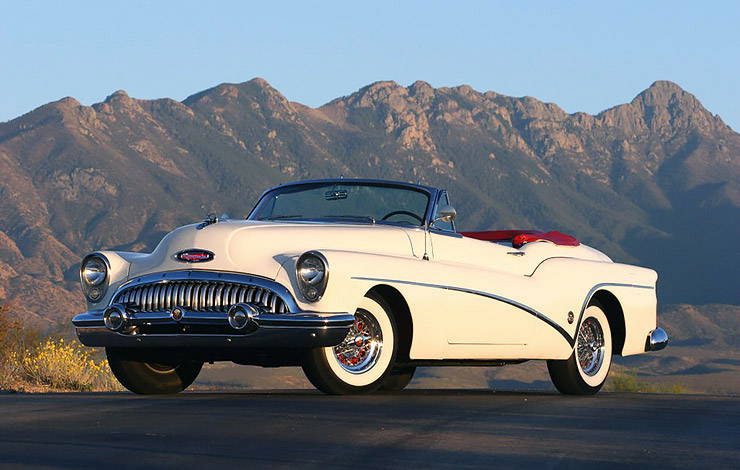 A Sign of the Times
The Buick Skylark was a true 50s vehicle—it embodied all the enthusiasm of the era of rock ‘n’ roll and was perhaps just a little over the top. (But isn’t that what we love about the 50s?)  It was truly a once-in-a-lifetime release by Buick, who may never again have the capital or the whimsy to whip up such a fantasy car and immediately put it on the assembly line.

Speaking on the Skylark, the auto editors at the Consumer Guide Automotive laugh about the luxury convertible’s conception. “How different the Detroit of two generations ago!” they write. “Today a general manager would never okay so radical a product, priced 40 percent higher than the top-of-the-line model, unless it had been through waves of review boards, PR men, lawyers, and government compliance experts.” They go onto say, sarcastically, “Imagine hanging onto a model that sells only 1,690 copies in its first year because the styling vice president likes it. Yep, that’s the only reason Buick built a second-edition Skylark in 1954.” 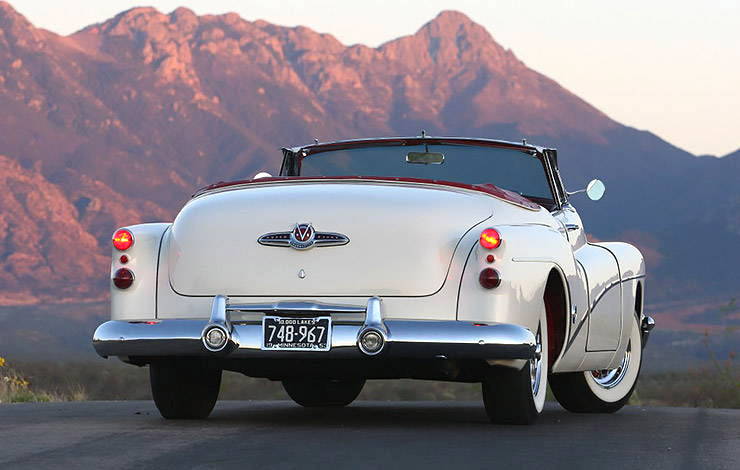 The Answer to the European Sports Car?
The Skylark was definitely a reflection of Buick’s capacity for spontaneity. The Skylark’s design was inspired by a 1951 roadster convertible that one of the brand’s stylists had customized, catching the eye of a general manager. Then, Buick made it, calling the Skylark “the answer to the European sports car,” which was a bit of a fib on Buick’s part. Because engineers put the Skylark on a Roadmaster chassis, it was technically too big to be a sports car. But buyers looked the other way (or didn’t know any better) and accepted Buick’s little white lie.

The 1953 Buick Skylark was shorter than other convertibles, which helped it create the “sports car” image the brand was pushing. A luscious design indulgence, the car was considered “handmade” because of all the custom stampings on the fenders and the doors as well as Roadster stampings on the hood and the trunk lid. The steering wheel boasted a small emblem plate heralding Buick’s Gold Anniversary and featuring the original owner’s name engraved in gold. Even the glistening wire wheels, made by Kelsey-Hayes, bore special 50th anniversary emblems in each hub. 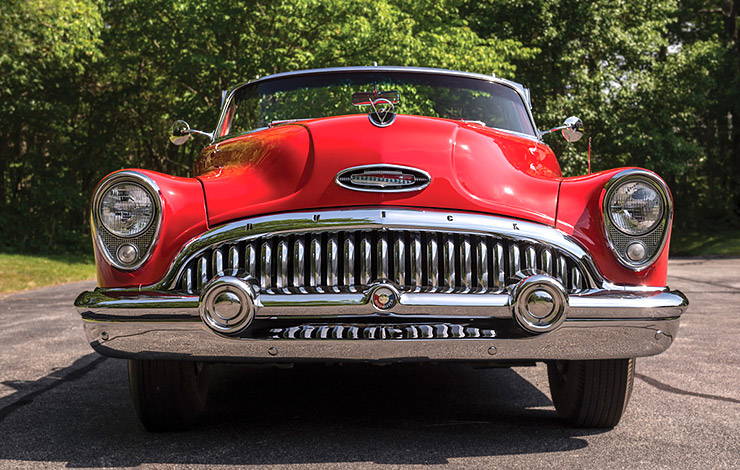 But such detail came with a price. The Buick Skylark came in at $5,000—a pretty penny in 1953. But that didn’t stop 1,690 people from snatching up their birthday Buicks. Owning a Skylark made a statement about your station in life—as well as your taste—and America’s wealthy elite wanted to own their own piece of Buick history. Celebrities like Bob Hope and Jackie Gleason were proud Skylark owners, among others. (Though many would argue, the Skylark always photographed better on its own…)


And it wasn’t just the Skylark’s luxurious look that earned it the highest price tag in Buick’s lineup, the special edition convertible also counted on a pretty enviable engine. Named the “Fireball,” the Skylark’s engine was a cutting edge 322 cubic inch V-8 with a four-barrel carburetor and 188 horsepower. The Fireball was Buick’s largest-bore engine in 25 years with the highest compression in the industry, thanks to the custom-fitted pistons. The Twin Turbine Dynaflow transmission was a brand new update of its 1948 predecessor and featured new technology that created a better connection between the engine and the driveshaft. 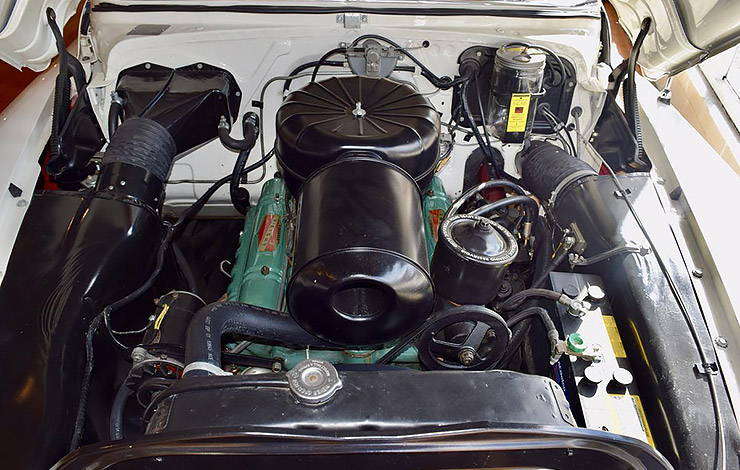 Inside the Skylark’s “cockpit,” driver and passenger were invited to sit atop soft-tanned, two-tone cowhide leather seats, available in a range of colors, with coordinating carpet standard.  Buyers of the birthday Buick needn’t flip through a catalog of options because plenty of little extras came standard on the Skylark—details like tinted glass, power seats, and whitewall tires. And elite rock ‘n’ rollers could crank up their Selectronic radios when cruising in a Syklark—the signal-seeking radio came complete with a power antenna and floor control. 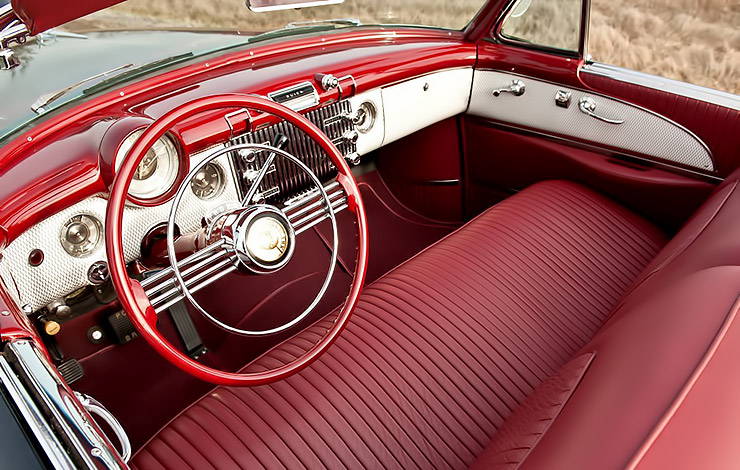 The 1954 Flop
The next year, when the Skylark appeared on the scene, it had been completely redone. No longer atop a Roadmaster, the Skylark now borrowed a Century/Special chassis, though continuing to share a powertrain with Roadmaster. Though designers tried to dress it up with newly fashioned chrome tailfins and lights, the 1954 Buick Skylark was not considered “handmade” and, consequently, the car lost some of its prestige—as well as its sales. The 1954 Skylark sold only 836 units and was discontinued later that year. 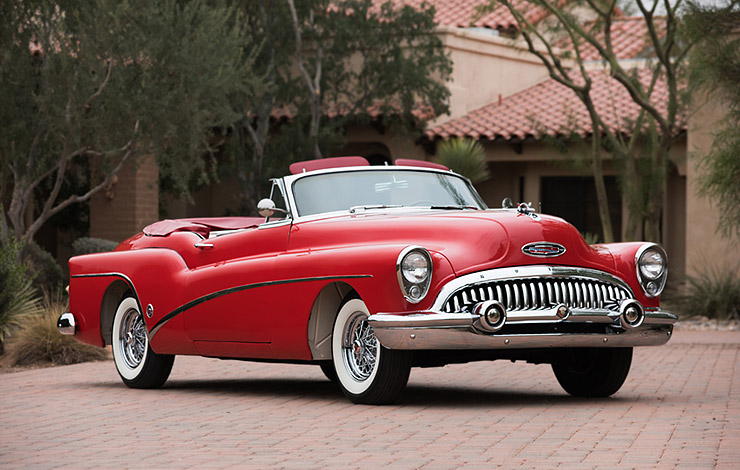 The Skylark returned to Buick in 1961, though the time lapse had changed the car’s personality considerably. No longer a luxurious, indulgent, birthday celebration, the new Skylarks were part of General Motors’ fleet of 1961 compact cars. Buick brought the price point down, making the Skylark accessible to more than the movie stars and CEOs of its debut. The last Buick Skylark was produced in 1998. By this point, the car had moved from posh to practical—gold engraved steering wheels were just a figment of the automaker’s imagination.


But engraved steering wheels and “50th Anniversary” hub caps can still be spotted today, if you happen to catch up with a lucky restorer who got his hands on an original Skylark. 1953 Skylarks are so highly coveted, they have sold for as much as $495,000. So it looks like being seen in a Skylark still says a lot about the driver’s station in life… 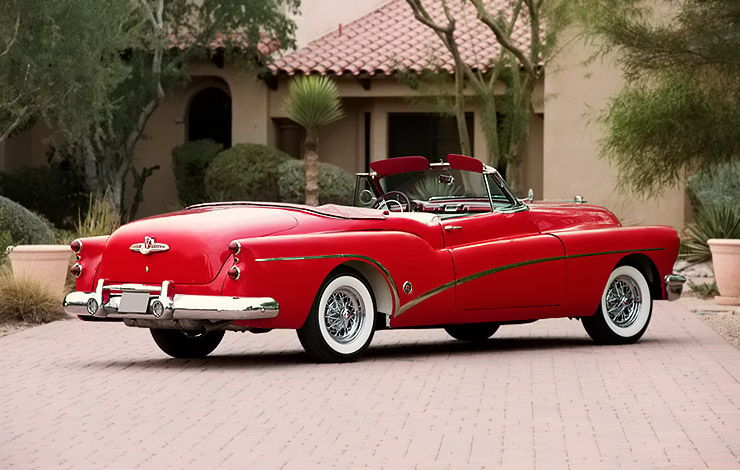 Now check out the video below with MaryAnn from Autohaus of Naples. It’s a joy to see a young lady who knows her stuff.
A beautiful blonde and a vintage convertible – how can you go wrong?