This Ford Hot Rod is as fast as a lightning and you should not mess with it, because “Double Trouble” is its second name!

“1927 Ford Model T with two side-by-side engines with a total displacement of 9.2 liters and four superchargers that produce 1200 horsepower? … It is not possible, you must have been dreaming. Something like that cannot even fit under the hood”, my friends were joking with me while I was telling them about this Hot Rod.
Well my friends, it is possible.
This was proved about 5 years ago with the project “Double Trouble” by Gordon Tronson, former Funny Car racer from New Zealand who lives in Las Vegas, Nevada. And if the hood cannot cover the two V8 engines placed next to each other, there is still another option – simply remove the hood.

The car is handmade, each piece of metal passed through his hands. During this process, many of his acquaintances thought that the sun in Nevada troubled his head, but he knew that the idea can be turned into one of the hottest hot rods that will appear on the roads.
After 6 months of hard work in his garage, this bad 1927 Ford Model T Hot Rod saw the light of the day. Even the biggest skeptics had to agree that it is a piece of art. 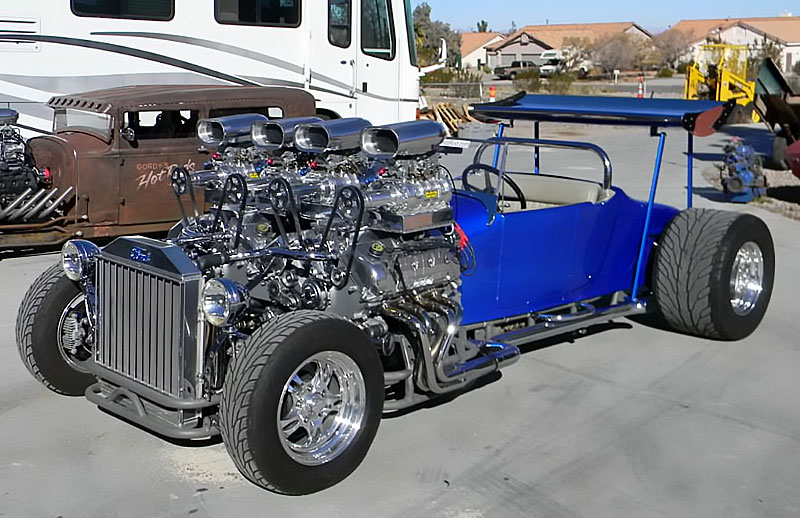 As I said, every piece on this car was crafted by its owner. The chassis is made of 1.5-inch manually custom-bent steel tubes, the body is made of fiberglass and this monster is powered by two 4.6 -liter modular Ford V8 engines stacked next to each other.

The first version was powered by two superchargers pushing around 1.000 horses. But … enough is never enough, right? Gordon is a strong believer that more is better, and after a while, he took his “Double Trouble” to the next level. Now these engines are boosted by a total of four superchargers pushing out over 1.200 horses. All that power on the asphalt is delivered through three speed Ford C5 automatic transmission and huge 15 × 14 rear tires.

The control over this Hot Rod is definitely a problem for the drivers without much experience. In order to have an idea of what happens to you while you are sitting behind the wheel of this monster with 4 superchargers you need a periscope … literally.

If you want to see more photos of Tronson’s “Double Trouble” Hot Rod, you can visit his website: http://doubletroublehotrod.com/